Fronted by former Sodom guitarist Andy Brings – from the Tapping The Vein and Get What You Deserve albums – Double Crush Sydrome is Germany’s version of Danko Jones; a solid three-piece rock band with corpse-glam painted punk tendencies backed by a solid metalhead pedigree. Active since 2013, the band is finally making some serious headway with this first official album featuring updated tracks from their 2013 independent release, The You Filter, and brand new songs. Die For Rock N’ Roll kicks off with the Skid Row-does-Ramones sounding “Gimme Everything” and remains full steam ahead through the title track, “Unfriend Me Now” and “She’s A Pistol”, gaining momentum and dynamics as it goes. Aside from sporting a clever title, “On Top Of Mount Whateverest” shows off the DCS penchant for sidestepping predictability, with bassist (and Brings’ former Traceelords bandmate) Slick adding his voice to the proceedings and the band tying things off with a mighty metal outro. The Danko Jones punch of “Yeah! Pain!” is followed by the unexpectedly cheesy (and first official single) “I Wanna Be Your Monkey”, which has legs for miles as a live track and is bound to become a singalong show closer. “Slow Suicide” is the exact opposite, dark and destined to surprise some people given the album’s party vibe with its “please kill yourself” bridge. And so it goes on the Die For Rock N’ Roll rock n’ rollercoaster from the moment it leaves the gate.

The You Filter was a strong first kick at the cat for DCS, making Die For Rock N’ Roll something of a risk in that it features a different line-up, but the re-recorded songs like the title track, “Fuck You Is My Answer”, “Blood On My Shirt” and “She’s A Pistol” stand up loud and proud alongside newer material like “Gimme Everything”, “Can’t You Be Like Everyone Else”, “Revolution”, “And They Say We Are The Freaks” and “Right Now”. The difference between Brings’ and Slick’s voices (call it Helloween’s Andi Deris to Iron Savior’s Piet Sielck in the metal world) makes for brilliant contrast, particularly when they trade-off lead vocals. Musically, Double Crush Syndrome is based on Ramones science rather than rocket science; good dirty guitar driven fun that has earned the band a legion of fans and its fair share of haters. Not that the trio have ever given damn with regards to the latter. 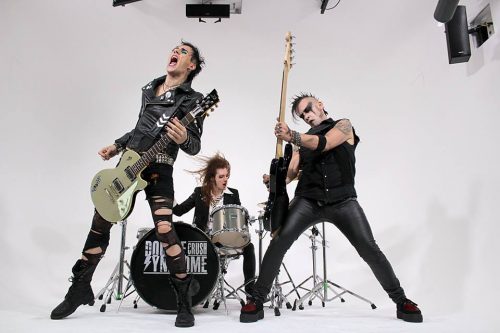 “Gimme Everything”
“Die For Rock N’ Roll”
“Unfriend Me Now”
“She’s A Pistol”
“On Top Of Mount Whateverest”
“Yeah! Pain!”
“I Wanna Be Your Monkey”
“Slow Suicide”
“Can’t You Be Like Everyone Else”
“Blood On My Shirt”
“Revolution”