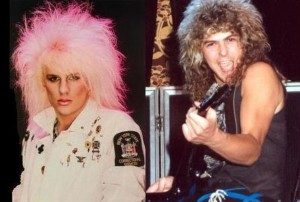 Fraser: “Brighton Rock did a show in Edmonton, and the next night Poison was playing in town with Tesla opening. They arrived the day before their gig so they all came out to see us play. So, we’re partying upstairs at the club and somebody asked ‘Where’s C.C.?’ because we knew he was there but he never came upstairs. It turned out that while the crew was tearing down the equipment – and the bar had pretty much emptied out by this point – C.C. got on stage and grabbed a mic yelling ‘Heeeeeeeyyyy! How you doin’ tonight!’ to an imaginary crowd. The mic wasn’t even going through the P.A. anymore, the guy was loaded out of his face (laughs).”
END_OF_DOCUMENT_TOKEN_TO_BE_REPLACED

“Nobody could copy Midnight, but Wade fit the Crimson Glory style,” Drenning says of choosing Black, who is arguably the closest they could have gotten to a worthy successor. “Astronomica was originally written and recorded for Midnight. END_OF_DOCUMENT_TOKEN_TO_BE_REPLACED