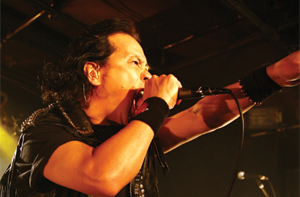 No matter what he does musically, vocalist Minoru Niihara will forever be known first and foremost as the singer for Loudness. Even when Obsession’s Michael Vescera and ex-EZO frontman Masaki Yamada took his place (between 1988 – 2001) Niihara was still regarded as the band’s one true voice. Two years prior to Loudness’ official reunion Niihara launched XYZ-A, perhaps best described as a bare bones garage metal band, arguably the most successful venture under his belt outside the Loudness camp. Like any long time band, however, XYZ-A’s appeal seemed to wane with back-to-back ho-hum albums I.V. (2004) and Wings (2006); neither was particularly bad but both were far from memorable a dozen spins later. Their ten year anniversary record, Learn From Yesterday! Live For Today! Hope For Tomorrow! – a take on Albert Einstein’s famous quote – is a much different and aptly titled story, as Niihara and his bandmates have made a welcome return to the devil-may-care attitude of their earlier records. Top that off with a new major label deal in Japan with Toy’s Factory – former home to Arch Enemy – and XYZ-A are primed for another decade at the very least. Loudness, meanwhile, figures as prominently as ever in Niihara’s life.
END_OF_DOCUMENT_TOKEN_TO_BE_REPLACED