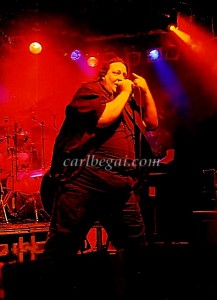 “That compilation is something Paul (O’Neill / producer, Trans-Siberian Orchestra director) helped put together, I didn’t have much control over it,” says Oliva. “I just wanted to get something out there to kind of cap things off because I’ve moved on. Those reunion rumours… some people have been saying things they probably shouldn’t have. There was talk about doing a show to kind of give Savatage a send-off but the logistics of doing so just made it impossible. The guys have the Trans-Siberian Orchestra, I have my JOP stuff, there’s a lot of other things keeping us busy. It’s pretty aggravating, though, with people always asking about when it’s going to happen and pushing to have one. I mean, Savatage hasn’t done anything in almost 10 years! It’s just a small group of people, but they just won’t let it go and I can’t figure out why. You have the Savatage guys in the Trans-Siberian Orchestra, which was spawned from the Dead Winter Dead (1995) and Wake Of Magellan (1997) era of the band, you have Jon Oliva’s Pain doing a lot of the old Savatage material, what more do you want?” END_OF_DOCUMENT_TOKEN_TO_BE_REPLACED