Back in March, BW&BK was invited to attend the listening session for Children Of Bodom’s highly anticipated new album, Halo Of Blood, to be issued through their new label Nuclear Blast on June 7th. The ‘net is abuzz with reports that the band have taken a back-to-the-roots approach this time out, and while it may seem that way on the surface, turns out Halo Of Blood is so much more than a rehash of a successful formula. For those that have written off the Hate Crew as having their best years behind them, Halo Of Blood will be a a pleasant surprise for some, a kick in the nuts for others.

We sat down with keyboardist Janne Wirman and drummer Jaska Raatikainen following the initial run-through of the new album.

BW&BK: Making the move from Universal to Nuclear Blast seems like a logical step considering you were on Spinefarm/Nuclear Blast at the start of the band’s career. Was moving to a smaller label a case of feeling lost in the shuffle on a big roster of artists?

Janne: “The first three albums were just licensed to Nuclear Blast, so we didn’t really have that much of a relationship with them, but we’re excited about the move. We had a great relationship with Spinefarm, but Spinefarm got sold to Universal as you know, and when a major label takes control of a smaller label things don’t always go as planned. Little by little it started to be a sucky deal for us, so when our deal ended with them we started shopping around for a new deal. A lot of labels made offers, but in the current market when major labels are going down anyway, it was a good decision to go with an independent metal label that is also the biggest metal label in Europe.”

Jaska: “Everybody always says we were a Nuclear Blast band because of the licensing deal, and the first tours we did were Nuclear Blast festival tours. Still, we knew the people involved so it was nice to come to this label. As Janne said, it was a logical decision.”

BW&BK: Alexi (Laiho/vocals, guitars) is and always has been the songwriter in this band, but there has to be more that one guy involved in the creative process for a band to be around for 15+ years. Did the rest of the band have more input on Halo Of Blood compared to the last few records?

Janne: “Maybe the whole band’s arranging of the songs had even a little bit more to say this time. Alexi is the musical director, he’s composing the music, but we played around with ideas more this time. We tried different things and experimented a lot. I think we spent more time arranging these new songs together than we ever have in the past.” END_OF_DOCUMENT_TOKEN_TO_BE_REPLACED 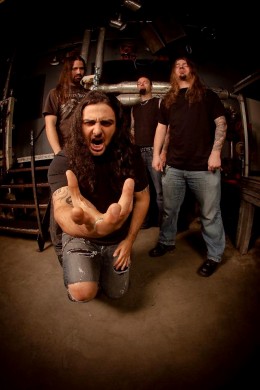 “We had to dust off a lot of things to get at that old footage. Especially the footage of our very first practice with me and my mullet (laughs), my cousin Fabio Agostino (guitars), and Ariel Martinez on drums in the basement. You can see the footage is old… ‘90 or ’91; that’s vintage, before Sylvain (Houde/vocals). We weren’t even Kataklysm at that point, we were TSD. My cousin had the footage and it was so old it wasn’t even on a VHS tape, it was on one of those little tapes you put in the VHS tape (laughs). At that time there were no cameras that took normal video tapes, they were about to come out. It was done on a handheld, a bunch of kids thinking they were gonna be rockstars.” END_OF_DOCUMENT_TOKEN_TO_BE_REPLACED