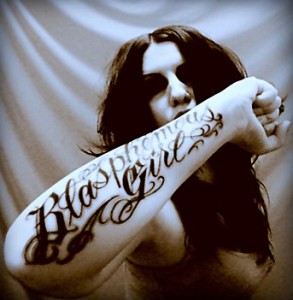 My Ruin vocalist Tairrie B. Murphy doesn’t subscribe to the mythical glitter of stardom, nor does she believe it’s necessary to get her assets out to sell her music. She’s an artist in the truest sense of the word, suffering both figuratively and – as the need arises – literally in order to get the results of her creative energy out to the masses. And, like many of her kind, she isn’t restricted by the “musician” box checked on her resumé. For sheer love of creativity, Tairre has her own business marketed under the banner Blasphemous Girl Designs, offering up one-on-a-kind custom jewelry for those interested in wearing a piece of in-your-face inspiration. Certainly not as high profile as selling hot sauce by the case or moonlighting as an actor, but it’s another pursuit that gives Tairrie a sense of accomplishment.

“I’ve always been a do-it-yourself girl,” she begins. “Back in the late ‘80s and early ‘90s, when I was a rap artist, I used to design custom pieces of jewelry that I would have made for myself at the Slausen Swapmeet in Los Angeles where Eazy E and NWA used to get stuff made. I was really into two and three finger rings, nameplates and cut out earrings. Before that, I was designing custom jeans and jackets that I would cut, bleach, sew, paint and embellish with various patches, vintage fur and found objects. I remember having this woman come up to me at an underground club I used work at one night, and she was a buyer for a really upscale store in Beverly Hills called Camp Beverly Hills. She asked me where I got my jeans and when I told her I made them myself she gave me her card. Next thing I knew, I had set up a make shift factory in my grandfather’s garage to hand make 80 pairs. It was crazy!” END_OF_DOCUMENT_TOKEN_TO_BE_REPLACED