“It’s not that it’s difficult,” Townsend continues. “It’s just that the process of trying to figure out where I am in the world is being helped in large part by me becoming addicted to making records, or whatever the hell happened in the last seven years. You get to a point where your quality of life is shot because you’re doing this inhuman amount of work. In a lot of ways I’m really glad that it happened and that I’ve made too much music for too long because it’s put me in a position where I have to analyze it. I’m not a total idiot, and as I get older the things that keep rearing their head in terms of problems in my life, I have to take notice of them or they just continue. One of them for me is this fascination with productivity that I’ve had for so long. It’s resulted in a type of exhaustion that’s avoidable.” END_OF_DOCUMENT_TOKEN_TO_BE_REPLACED 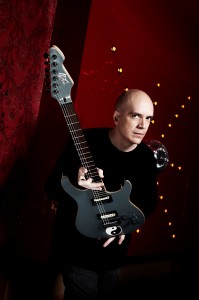 Ki is also a pointed confirmation that Townsend wasn’t kidding when he announced back in May 2007 that Strapping Young Lad was dead. It was a decision made out of necessity, as according to the press release issued “the last tour (for The New Black) was a real struggle for him to muster any enthusiasm, mostly because SYL was initially created to vent all his frustrations, which no longer exist.” Furthermore, Townsend admitted flat out he was tired of touring and doing interviews, and had no intention or desire to return to the grind although he would release music from time to time. And while there’s little to no chance he’s going to resurrect SYL, Townsend decided in favour of the interview circuit in order to set his rather volatile record straight.
END_OF_DOCUMENT_TOKEN_TO_BE_REPLACED