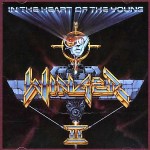 There are albums in every metalhead’s collection where you just kinda shake your head and wonder how much you’d had to drink prior to hitting the Midnight Madness sale at the local record store. Then there are those albums that you swear no amount of alcohol, drugs and offers of drunken monkey sex combined could ever convince you to listen to let alone spend money on. And yet, there it sits, filed away neatly amongst the pure fucking metal you claim to live your life by, a festering musical zit recalling the glaring lack of taste symptomatic of youth.

With the exception of Warrant’s debut Dirty Rotten Filthy Stinking Rich – destined for a smackdown soon enough – In The Heart Of Young is hands down the WORST slab of cheese in my music collection. Even worse than those lousy ballads that turned Stryper’s To Hell With The Devil into a bulimic trigger. Reason being, it’s an entire album of spineless featherlight poofball synthesized cock “rock”, not merely Grade-A sap confined to a few select tracks. Dry lead and backing vocals that sound like they were lifted from the respirator Mutt Lange uses on Def Leppard, canned and ultimately lifeless synth drums (and you’re trying to tell me Rod Morgenstein played on this?!), and polished-to-a-shine arrangements that suck the life out of what shoulda and coulda been Reb Beach shredding up a storm. Loads of potential in tracks like ‘In The Day We’ll Never See’, ‘Little Dirty Blonde’ and ‘Loosen Up’ (hail the Extreme groove), all squelched into a steaming monotonous pile. Seriously, listening to this now, I have to wonder how in the hell this went platinum. People bitch about present day records sounding like phoned-in cut-and-paste synthetic (read: FAKE) productions? This is where it started.

It’s no wonder Lars Ulrich (Metallica) and Mike Judge (Beavis And Butthead) declared war on Winger, because In The Heart Of The Young is downright offensive to even the most lamebrained ‘80s rock torchbearer, then and now. Forget it and go back to the debut instead. For all the abuse heaped on this band, first shot out of the box had some cool moments – the Reb Beach shredfest ‘Time To Surrender’ still kicks my ass – and third record Pull was ballsy, but #2 really was just that and then some.

Fave tracks: not a one, and with good reason. If I have to endure Winger I’d rather hear this. Insane voice, but that future trademark Britney Spears head-mic has gotta go…