Carmen Elise Espenaes used to be known as the younger sister of Leaves’ Eyes vocalist Liv Kristine first and the singer of Midnattsol second. That started to change at the beginning of 2008 with the release of Midnattsol’s second album, Nordlys, an unexpectedly ballsy outing leaps and bounds ahead of their 2005 debut in every way. Affectionately referred to by some as having an Amorphis-meets-Iron Maiden sound, Nordlys took the folk metal direction established on Midnattsol’s first record, Where Twilight Dwells, and turned it on its ear. The band was bent on making an impact. More progressive and traditional metal elements, most certainly heavier, better produced, the album showcased a band interested anything but settling for comfortable half-measures. Capping it off was Espenaes’ multi-facetted vocal performance, so strong that one had to wonder where Midnattsol had found their new singer and why she was using the old one’s name. Once perceived as delicate and waif-like, perhaps even insecure in her role fronting a metal band, Espenaes blew the doors off on Nordlys like a seasoned professional. A development that could be seen as well as heard over the course of the select number of shows Midnallsol was able to put in over the past year. 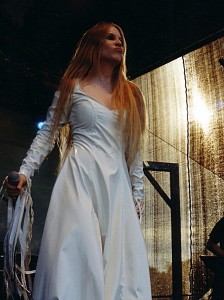 “Those shows were a great experience because I noticed that we’ve grown a lot,” says Espenaes. “We’re calmer in a live situation now, more mature, and we’ve grown together as a band in performing live. I’m not as nervous before the shows as I used to be. The show we did at the Rock Temple in Kerkade (Holland, in January 2009) was actually the best performance I’ve ever given because it was the first time I really heard myself for the whole show, and I could actually hear the guitars for a change. First time ever (laughs). Before I was just singing blind, I didn’t feel like I had any control. That show made such a huge difference for me, and I realized how other artists must feel when they have great sound on stage. It was like a new world for me, so I finally know what it’s like to be able to show people what I can do as a singer. I think the people really noticed that I was a lot more confident. For myself, I realized that if the conditions are right I can perform very, very well. Some people were saying I sounded like I do on CD, and because I haven’t done that many live shows that was quite a compliment. Now I’m not as insecure as I used to be, and I’m giving the best I can no matter what happens.”

Like almost everyone, Espenaes prefers Nordlys over its predecessor. Understandable considering how much effort she put into improving herself as a singer for the album.

“A lot of people told us they liked Nordlys more than the first album, but a few have said they prefer the first one. I have to say I like the Nordlys album a lot better because of how we developed from the first one. It’s better to my ears because the musical quality of the album, and we did much better work as composers and musicians. I also like the diversity of it because it doesn’t get boring. I still like to listen to Where Twilight Dwells, though, because it has its own identity.”

In the end Nordlys was something of a bittersweet triumph for Midnattsol, with guitarist Christian Hector announcing his departure two months after the album’s official release. A particularly 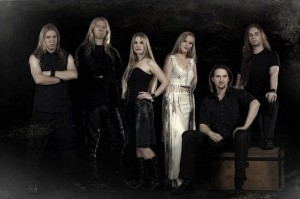 emotional situation for Espenaes in that she and Hector co-founded the band. She freely admits Hector’s decision drove her to tears.

“I don’t think you can imagine how shocked we all were,” she says. “It came out of nowhere; we really had no idea about it. There were no signs or anything, and then Chris just told us he was leaving. It took everyone in the band a few days to realize what had happened, and then it was like, ‘What do we do now?’ We were really sad and we needed time to cope with it. After a while we accepted the idea that we had to move on. Chris wanted us to continue as well, so it’s not like we thought about quitting. But, it was really, really hard for us, and of course we tried talking with him, but I understood his decision. When he explained everything I knew for myself that yes, it was very sad, but it was actually the best thing for him. Chris is our friend and we want him to be happy.”

“Chris’ decision had nothing to do with the personal side of things. There were no fights, and he wishes us all the best in what we’re doing. We still see each other from time to time, so the friendsip we had is still there.”

“My departure from Midnattsol is still the right choice for me, although it was strange to see the band at the Summer Breeze Festival last summer with a new guitar player,” Hector admits. “I have a lot more time now, although it’s still not enough for all things I’d like to do. I’m happy to see that Midnattsol is still going on well without me. And as Carmen said, we’re still friends and support each other as bands and as people. Unfortunately, we don’t see each other as often due to Carmen living in Norway again, but from time to time we chat a bit at festivals. We celebrated New Year’s Eve together, actually. Wasn’t too good for Birgit (Öllbrunner / bass), 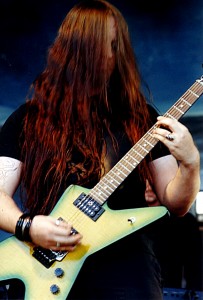 though; damn that bloody vodka (laughs). I know people out there would rather read that we’re bashing the guts out of each other, but I guess we’re a bit boring that way (laughs).”

“At the moment I’m concentrating on my family and the new Ahab album,” he adds, referring to the doom metal act he launched in 2005 with Midnattsol guitarist Daniel Droste . “And of course my regular work for Metal Hammer takes the biggest part of my daily time. Yet, I have another strange new idea for a one-album death metal project. Maybe I’ll ask (Midnattsol drummer) Chris Merzinsky to play the drums and maybe Birgit playing bass. So musically, it’ll stay interesting…”

Espenaes’ sights, meanwhile, are trained on Midnattsol’s all important third album. It has to prove Nordlys wasn’t a happy accident and admits to looking forward to the challenge.

“I’m really looking forward to the next album because it’s like ‘Oh… which direction are we going?’ (laughs). We’re not sure yet, so it’s very exciting to see how the band is going to develop. I feel like we have all the possibilities in the world open to us, and I know that when it comes to my voice I can sing like I did on the first CD or I can use different voices like I did on the second one. We have so many possibilities, so it’s going to be really exciting finding our main focus. Especially now that we have Fabian (Pospiech) in the band because he’s going to bring his own influences into the songs. I feel we have so many possibilities now to do what we want. It’s just the question: what do we want to do?”

“We really can’t wait. I have a lot of ideas already and I’m writing a lot of lyrics. We’re all in a good creative phase right now and we feel ready for the next album. This is very important for us. Three or four months ago we weren’t prepared to be creative; we were still focusing on Nordlys and trying to find a new guitarist. But now, even though we’re busy with our lives, we’re collecting new ideas and writing new songs. You never know for sure, but I think we’ll have a some songs ready in a couple months and have some idea of when we’ll go into the studio.”

Whatever the timeline may be for a new record, the band can rest assured their growing legion of fans are waiting impatiently for it.

“And that’s fantastic,” Espenaes agrees, “because we’re not as active as so many other bands. We have busy lives right now so we’re not doing very many shows or other promotion, but I’m stunned because in spite of that people continue to write to us and support us. It doesn’t stop even though we’re not doing this full time, which is amazing.” 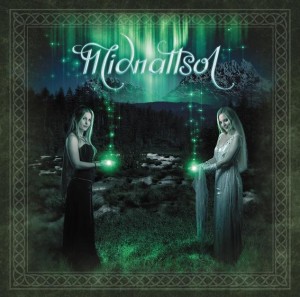