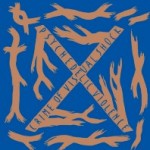 From where I sit one of the more mind-boggling cock-ups in metal is how North American and European labels managed to miss the boat completely on a band that was selling out multi-thousand seaters and large arenas in Japan two albums into their career. Particularly when folks like Mr. Moneybags himself, KISS merch / PR god Gene Simmons, was trolling around Japan in the late ‘80s looking for new talent and scooped up the far less popular metal punks Flatbacker (better known as EZO in the years that followed). Can’t blame the pass on the fact most of X’s songs were executed in Japanese either, given the early ‘80s international success of a little export called Loudness. And it’s not like X were a trendy new thing, having built up a loyal following at home since 1982. Me, I didn’t clue in until ’93, when my best friend handed me a tape of a band he’d discovered out of the blue and suggested I check them out. This was the album, and I couldn’t help but wonder how the hell they slipped beneath my radar and that of my favourite import record stores. In their heyday X were the ultimate glam outfit (no pun intended), sporting bigger hair, flashier clothes and more make-up than any other band playing dress-up, making them rock rag pin-up darlings. Unlike their LA scene Look What The Cat Dragged In counterparts, however, X’s music made it impossible to pigeonhole the band due to their image. Blue Blood is and will remain one of the few damn near perfect albums in my eyes for the simple fact it never lets up and never gets lazy, even when things slow down for a cheeseball ballad or two. Full-on shredders ‘Blue Blood’, ‘X’ and ‘Orgasm’ are reminiscent of Walls Of Jericho-era Helloween, making them my tracks of choice; same old school shred-and-clatter coming within a hair of genuine thrash. Still, I can’t help but admire the audacity of putting those songs side-by-side with melodic rock fare like ‘Weekend’, ‘Easy Fight Rambling’ and ‘Celebration’ or a sappy ballad like ‘Endles Rain’. The biggest ass-kickings come in the form of the 11 minute epic ‘Rose Of Pain’ and the unique everything-including-the-kitchen-sink crusher ‘Kurenai’. I have yet to discover another song that ropes me in time after time the way this one does (watch the clip below… if that isn’t metal at its finest I officially know jack shit). Not a naff track on the record thanks to some brilliant songwriting and five ridiculously talented musicians. Guitarists Pata and the late Hide were two of the most underrated / undiscovered axemen around, and Blue Blood is a testament to their skills.

Sadly, the band never managed to recreate the same energy on the albums that followed. Ten years away and the internet succeeded in turning X (better known as X Japan these days) from a word-of-mouth sensation to an international phenomenon. One that still doesn’t have a record deal outside of Japan, not that they ever needed one.