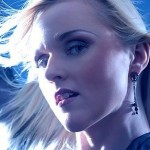 Just how much of a bang you get for your buck when buying music all comes down to how high one’s expectations are going in. That said, folks will never be able to accuse Leaves’ Eyes of doing things half baked to honour signatures on a dotted line. Their new DVD, We Came With The Northern Winds / En Saga I Belgia, is in keeping with the all-or-nothing work ethic they established for themselves since surfacing in 2003; a monstrous split documentary / live DVD clocking in at a healthy 6+ hours dolled up in a package reflecting the amount of effort that went into the project. It celebrates the six years spent building Leaves’ Eyes up from scratch, a journey that has brought them more attention and opportunities that anyone in the band had expected at the start. The DVD has also been a long time in coming according to vocalist Liv Kristine Espenaes Krull, who is both proud and relieved it’s finally out and meeting with widespread approval from the fans and media alike.

“This is actually what we had in mind when we started this project,” says Liv. “We started collecting material in 2004 – 2005. We figured most bands release a DVD with the live show and some backstage shots, and that’s fine, but we wanted to say thank you to our fans and just make something more out of it. So, we ended up with something like six hours of entertainment.”

Was it a bigger venture than you had expected? Maybe a case of the band biting off more than it could chew? 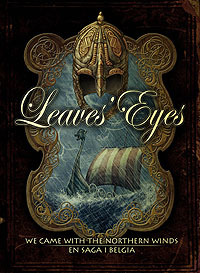 “Oh hell yes (laughs). It was much more than we ever imagined. There were so many aspects we had to take care of. For example, when we were finished we still had to prepare the North American version since the formats between Europe and North America are different. The live DVD wasn’t really hard work because it was just the one show (Metal Female Voices Festival 2007). We actually had the audience coming through on my microphone, but we couldn’t cut my vocal tracks into pieces trying to take the audience out, so what you’re hearing is one long take (laughs). We had a hard time going through all the material we had collected because there was just so much of it. That was a tough job, putting everything together and then having to do the translations. That’s our own fault, but it’s a way of saying ‘Thank you’ to our fans. That’s what the DVD was meant for.”

The DVD is particularly impressive when one considers it was envisioned and created by a young band with only two official albums to their name. Most veteran acts boasting a hefty catalogue of material and a history would be hard pressed to match this production. Liv merely considers the effort a logical part of her growth as an artist.

“I’ve been making music since I was 18 and I’m 33 now. If you’re an artist I think it keeps you young because it keeps your mind young. You have to come up with new ideas and improve yourself all the time. I don’t feel like I’m 33. I feel much younger, and because (son) Leon is here I’m able to switch off and think about anything else other than the music business. That’s easy to do when your crawling around on the floor on all fours searching for the right Lego piece (laughs). It’s amazing and I really love that. I do think I’ll be doing this for the next 20 years at least.”

Which leads to the next full length Leaves’ Eyes album, Njord, due out this August. At press time recordings were complete and the band was putting the finishing touches on the highly anticipated follow-up to the Vinland Saga from 2005. 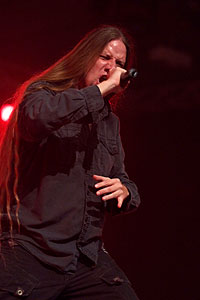 “Alex (Krull / vocalist) is actually in the next room mixing the new album. We’re getting there; it should be ready in two or three weeks. Parallel to this I’m in the other studio composing my third solo album. And Tosso (Thorsten Bauer / guitars) is working on Calling The Rain 2, which is Atrocity featuring Alex’s sister Yasmin. So we have three things going on at the same and it’s crazy, but it’s possible because we have our own studio. I really admire the will and strength of people like Alex and Tosso, and we all work hard day after day. And we stick together as a family, which is something I think we can be very proud of.”

She offers a brief glimpse at the inner workings of Njord…

“I wanted another concept for the third album, and I wanted to travel back in time 1,000 years to the Middle Ages and the Vikings. I’ve taken bits and pieces from Nordic mythology, and some lyrics are about places and events during the golden age of the Vikings. Because of this the album has six languages on it; I sing in English, Norwegian, old English, Gaelic, high German and French. The music is heavier, it’s more bombastic. We recorded the orchestra in Minsk, and we had a classical choir so I didn’t have to do everything myself (laughs). But I joined the choir for the first soprano and I really loved that. We’ve added a couple aspects to the music which made the album sound even more impressive. There are some wonderful contrasts between the really bombastic, heavy and aggressive songs and a couple of ballads.”

Capping things off, discussion turns to Theatre Of Tragedy. Instead rehashing the whys and wherefores of Liv getting fired in 2003, however, the question revolves around whether Liv realizes just how much her early work affected the metal scene. Theatre Of Tragedy’s original and unique sound helped create an entirely new genre of metal that is now commonplace, ultimately influencing budding artists around the world to take a shot at symphonic metal. In a brief BW&BK interview conducted in December 2008, for example, Nightwish keyboardist / founder Tuomas Holopainen went on record as saying Theatre Of Tragedy is one of the main reasons his band even exists.

Not a sentiment to be taken lightly. 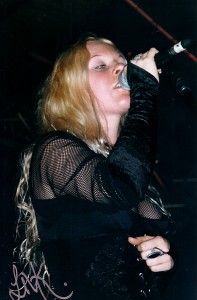 “I’ve got goosebumps right now,” Liv laughs. “It’s weird thinking about it like that because back in ’94 / ’95 we’d just gather in the rehearsal room, and I was the backing singer. I was the one who just sat around and watched the guys, but I came up with a few ideas here and there and showed Raymond (Rohonyi / vocals) how I thought things could sound, and we all thought it sounded kind of weird but… amazing (laughs). There was this huge contrast between my voice and Raymond’s, and that’s what made us think that people would probabably tell us to sod off with such a stupid idea – and that did happen a couple of times. We recorded four tracks for a demo cassette, and we copied it and sent it to 15 different labels around Europe, and within two weeks we had five offers. That was so strange. We had a record deal right away, we recorded the self-titled debut, and then we went on tour as support for Atrocity. All this happened within one year. Those were amazing days, I really have to say.”

Liv holds Holopainen’s accolades close to her heart, but she gives credit where it’s due. To Liv’s mind the keyboardist’s crystal clear musical vision is what has resulted in the band’s monumental success.

“The compliment is awesome, but I think Nightwish kept their roots throughout every release they’ve had, and that was their winning point. Theatre Of Tragedy changed its style after the first three albums. There were some huge fights going on within the band about musical taste and direction, and of course the audience feels this. I guess that was also the main reason why I got kicked out. I grew up with metal and classical music, and those two styles may very well be combined. I like the contrasts in the music. I’m very happy and satisfied these days because music comes from my heart and imagination, so it just feels so much better to be creative and stand up for it. I can say ‘This is a part of me.’ Of course it hurts when people or certain journalists say they don’t like my music or they don’t want to like Liv or whatever, but after all these years it’s so much better to feel comfortable with what I’m doing.”

“I think experience is very important,” she adds. “Every person in Leaves’ Eyes has a different story and a lot of experience, and when all this comes together it makes Leaves’ Eyes a unique band.” 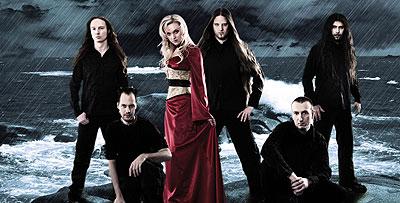