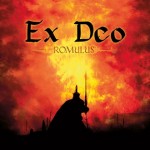 Nobody said anything about an atomic bomb destroying Rome, but that’s pretty much what Ex Deo’s debut amounts to. An ambitious “little” history lesson cooked up by Kataklysm frontman Maurizio Iacono, Romulus plays out as the ultimate blood-and-guts soundtrack dedicated to the Roman Empire, putting all past cartoonish attempts by Virgin Steele to do the same to shame. More importantly, this doesn’t sound like a safety-first Kataklysm rehash even though Iacono’s brethren are heavily involved in bringing the material to life. Nope; the man has thrown himself off the highest tower he could find with the intention of creating something unforgettable upon impact, and he’s hit the ground running. The album marches along at a stately yet bludgeoning pace thanks to Kataklysm bassist turned guitarist Stephane Barbe, drummer Max Duhamel and producer J-F Dagenais, falling squarely between the realms of Cradle Of Filth and Amon Amarth as Iacono quite often out-Filths COF’s lead dwarf for intensity when he’s not in full roar. Guest appearances by Nergal (Behemoth), Obsidian C (Keep Of Kalessin) and Karl Sanders (Nile) add some welcome flash, while Blackguard keyboardist Jonathan Leduc provides the symphonic foundation for the carnage being wrought. Bands like Epica and Nightwish would do well to have Leduc on their side when scoring orchestral material, as his contributions to Romulus are never tedious or out of place (read: he knows when to play and when to shut up). Could’a done with a bit more speed and dynamics scattered throughout rather than letting the left-right crush groove dominate as much as it does, but for a debut Ex Deo could have been and done a hell of a lot worse.