It’s shaping up to be a banner year for Primal Fear bassist / co-founder Mat Sinner. Coming off a successful run for the Sinner album Crash & Burn – a no-nonsense rock record showered with accolades across the board, even by fans that had written them off ages ago as a waste of time – Primal Fear’s eighth album, 16.6 (Before The Devil Knows Your Dead), has yanked the band’s loyal fanbase out of the ho-hum stupor caused by last outing, New Religion. Not that the album was particularly horrible, but it lacked the staying power and overall fire of predecessors Seven Seals (2005) and Devil’s Ground (2004). A matter of taste, perhaps, but it’s hard to put down the suggestion New Religion is weak when stacked up against 16.6’s ultra-focused no-holds-barred approach. Chalk it up to a major trimming of the fat with the exit of guitarists Stephan Leibing (amicable) and Tom Naumann (necessary), effectively replaced with the return of Henny Wolter and entrance of Swedish wunderkind Magnus Karlsson. As Sinner tells it, Primal Fear hasn’t felt this good in a long time. 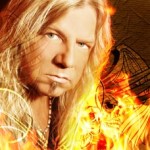 “The last year has been great,” Sinner affirms. “I’m still in love with the last Sinner album because it was something very, very special. I really like the attitude and the music, and I’m really happy this band could come up with such a raw and great rocking album. The vibe in the band is really, really good, and it’s just a question of the attitude of the guys in the band. The four of us working together now under the Sinner name are very good friends. We have the same view of things and that’s really special. If you see us play live I think that comes across, and I think that’s really cool to watch.”

Asked if the positive energy infusing Crash & Burn bled into the making of 16.6, Sinner dismisses the idea. It’s hard to ignore the fact, however, that Wolter – a proven formidable songwriter and player – is now a member of both bands.

“I don’t think so. Primal Fear is a different attitude and a different kind of music. The rock n’ roll attitude we have with Sinner, that whole back-to-basics thing, I don’t think that would be good for Primal Fear. Henny and me did learn a few little things making the last Sinner album, like Dennis Ward (producer) would be a cool partner to have in the studio as an engineer. Dennis always a helping hand, so we decided to work with him on the Primal Fear album, too, but the whole strategy for Primal Fear was totally different.”

Maybe so, but from an outsider’s point of view Crash & Burn and 16.6 share a similar energy. At the risk of sounding prissy, both albums are quite simply a hell of a lot of fun to listen to. Calling 16.6 one of Primal Fear’s best efforts to date isn’t an exageration, and Sinner doesn’t contest the claim.

“You’ve spoken with musicians all over the world, so you know that the new album is always the best,” he laughs. “I’m an honest guy, and the problem I had with the New Religion album was on the guitar front. We were going through a lot of problems, so it was a miracle the album turned out that great. We made the album happen with the help of Magnus and Henny, and it was a good album, but now there’s a different kind of quality on the guitar side of things. This band has a very different character now compared to the last line-up. Stephan’s big job was to handle and make compromises because he had a family to worry about. He was a very good guy, but he couldn’t keep up with us anymore. It was a friendly split, but those problems were reflected on the New Religion album. As for Tom… we don’t want to talk about that anymore.” 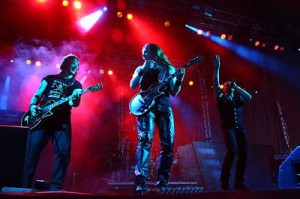 Suffice to say the split with Naumann was ugly, centered around his lack of motivation. In-studio conflicts during the making of New Religion made their mark on the band’s collective psyche, and while they may not have impacted the music on a noticeable level they made the recording sessions an unpleasant experience for all involved. Bringing Wolter back and adding Karlsson to the line-up essentially saved Primal Fear from becoming a crumbling mess.

“We had Henny and Magnus come in and we did shows together, we did tours together, which showed the other guys in the band that Primal Fear had a different quality of life with them around,” says Sinner. “Magnus, for example, is not only a good guitarist, he’s a great songwriter, a great keyboardist and singer and producer. He’s a fucking huge talent on stage, he looks good, plays good, has fun, so it was something totally new for us. Magnus didn’t just have a big influence on the new album, he brought in a new kind of vibe. Henny is more the rock n’ roll / metal vibe, and Magnus is more on the technical side, which is a very new dimension for the band.”

“We wanted him to make a big impact,” Sinner adds. “I’ve known Magnus for more than three years and we’ve been writing songs together for that amount of time. It makes a difference if you’re writing songs alone – which he does a lot – and writing together, so this is really a good thing for him not to be totally responsible for something. We’re a team and Magnus is a great team player. He’s also a fun guy to be around; he’s not this shy artist type living in his own world (laughs). He’s got both feet on the ground and I enjoy working with him.”

“We did everything differently this time,” Sinner says of the creative process behind 16.6. “Magnus has a studio in Sweden on a nice lake, so him, me and Henny spent a week at his house and set up the basics for this album. We wrote about 20 songs, then brought them to Ralf (Scheepers / vocals) and Randy (Black / drums). Ralf added his parts and brought a song of his own to the album, but most of the tracks were written at Magnus’ place. Our strategy was to get as many varieties and diverse styles of our metal onto the album, to show what Primal Fear could be, and make a bridge between the old days and the new.” 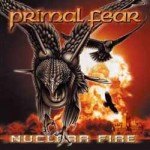 16.6 is, in fact, very reminiscent of Primal Fear’s third album, Nuclear Fire, released in 2001. They share that aforementioned “fun” factor and a welcome “keep it simple, stupid” attitude even though the band members have grown as musicians and songwriters since the Nuclear Fire days.

“Yeah, and who wrote the most songs on Nuclear Fire? Henny and me (laughs). What you’re saying is totally right and you’ve caught the vibe of what’s going on. Even if we found a path on Seven Seals and New Religion with some of the more dramatic stuff, we still kept the basic feel of Nuclear Fire because the Henny Wolter / Mat Sinner songs are absolutely prominent on this album”

“As the producer I wanted to make the album as interesting as possible,” he continues, “so we included some traditional parts, some modern parts, crazy parts, progressive and experimental stuff. And I can still say it’s Primal Fear even when we end up with a song like ‘Hands Of Time’. We always have a song on an album that’s surprising for the fans. On New Religion we had Simone Simons from Epica (‘Everytime It Rains’), on Seven Seals we had that monster song ‘Diabolus’, and this time we decided that since we have four great singers in the band we should do something completely surprising.” 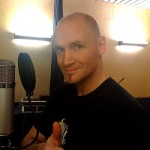 A surprise to Scheepers more than anyone, as it turns out. Sinner explains.

“We wrote that song at Magnus’ place, and at the beginning Ralf wasn’t happy not singing the whole song (laughs). We had to convince him of it; ‘Fuck, Ralf, you’re singing 99% of the album…’ (laughs). We recorded it and he took a ‘We’ll see’ view about it, but in the end he was happy we did it because it’s so different. He likes the song now.”

At the very least 16.6 proves that Primal Fear are still able to offer up an inspired performance eight albums in. Not an easy trick to pull off by any means at this stage of the game.

“I agree,” says Sinner, “but as I told you, as long as the chemistry in the band is great and everyone’s able to work together and share ideas, it works. And it shows us as a band that we still have a lot more to say. We’ve never been in the studio and managed to record 80 minutes of music, which is what we did for this one. Normally you say 60 or even 50 minutes is enough, and we recorded 30 more minutes on top of that. Everybody was so well prepared, and for me as a producer it was a totally different job compared to the last album. With New Religion everything was a problem, and this time there were no problems. I can speak for everybody who participated in making 16.6 album and I can tell you it was a fantastic experience.” 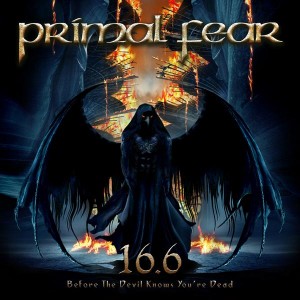 2 thoughts on “PRIMAL FEAR – The Devil And The Details”