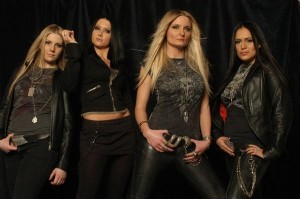 In the five years since their inception, Toronto-based all-female band Scarlet Sins have slowly but surely proven they’re more than just four pretty faces. Launched by guitarist Cristina Bishop and vocalist Sylvya NuVynska, brought to full strength with the addition of guitarist-turned-bassist Tanya Nicklaus and drummer Elie Bertrand, the quartet’s modern-edged anti-alternative metal sound has made them a stand-alone act on the Canadian scene. They are focused and fiercely independent, pushing the Scarlet Sins name on their own terms with noteworthy results. Toronto metal icon Ray Wallace – known for his behind-the-scenes work with legendary acts Razor and Sacrifice – took Scarlet Sins under his wing early on; a testament to the impact of their music. Rush producer / engineer Rich Chycki came on board to record the band’s self-titled 2007 debut; yet another endorsement of the foursome’s abilities as songwriters and musicians. Since then it’s been one bold step after another, and the world outside their Canadian haunts is becoming increasingly aware of their approach.

Call this a four part showcase for the fans, and an introduction for the people who thought Scarlet Sins was nothing more than a good looking idea.

As the proverbial new kids in town Scarlet Sins have been boxed and stamped by media and fans in an attempt to narrow down what makes the band tick. Par for the course, but they could do far worse than comparisons to Alice In Chains or Black Sabbath. NuVynska in particular is on the receiving end due to her position fronting the band. And while folks gleefully match her up against Layne Staley and Drain STH singer Maria Sjöholm, there are others that have problems deciding whether Scarlet Sins’ vocalist is a man or a woman. Nothing new for NuVynska, who admits to being flattered by their indecision even though some people should clearly invest in Coke bottle eyewear.

“Yeah, fuck, but you know what they’re saying now? If you go on YouTube you see these comments about me being a dude (laughs), that I had an operation done. It’s like, are you shitting me? Come on! I don’t really care what they say, but really, do I look like a guy to you? I don’t think so (laughs).” 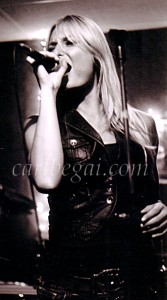 Of the four Scarlet sisters NuVynska has been in the spotlight the longest. Surface Underground took shape in 2001 in Toronto and the band kicked up some dust with shows and an album, but things never got beyond a decent burn.

“Surface Underground just kind of fell apart,” explains NuVynska. “We recorded an album, did a video, and that’s actually how I know Johnny (Pacheco), who played drums on the Scarlet Sins album because we didn’t have Elie yet. I just kind of dragged his ass in there (laughs). But we couldn’t really get things going with because we were all being pulled in different directions with other musical projects. So the band still has a MySpace page, the CD is available on CDbaby.com, but it’s done. I’m completely focused on and all my energy goes into Scarlet Sins.”

And how does it feel being the center of attention in what amounts a buzz band, where more people are piling on the wagon as word continues to spread on an international scale?

“It’s actually not like that at all,” NuVynska reveals. “I don’t feel like I’m the center of attention or in the spotlight or whatever because the fans of this band have their favourites. If you’re a girl in a band with a bunch of guys it’s only natural that you get more attention, and it doesn’t matter if you’re singing or playing guitar or drums. So, I might be the one who’s doing the singing – and the singer supposedly gets the most attention in a band – but I don’t feel like I’m the face of this band at all. I’m one of four members in Scarlet Sins and I get some attention, sure, but not all of it. The focus is on us, not me.”

Of the four ladies that make up Scarlet Sins, NuVynska is the unabashed old school rocker even if it’s not readily apparent in her singing style. That isn’t to say she doesn’t have a grip on the current world of metal, but she has no desire or plans to pull an Angela Gossow on the next record in the interest of “updating” the band’s sound. It simply won’t happen, so save your bets, as NuVynska prefers to keep things clean, melodic, and ultimately unique.

“Yeah, I’m so totally old school (laughs). When I was a kid I’d get laughed at because I was wearing Mötley Crüe shirts while everyone else was wearing Slayer or Metallica, but I didn’t care. I liked what I liked, and I still do. I’m still into those bands because that’s where I come from. My boyfriend and I were sitting around a while ago listening to all this old stuff, talking and raving about all these old bands, and he was like, ‘Shit, you actually know them?’ (laughs).”

The Crüe stole an additional corner of NuVynska’s heart in 2008, when they hand-picked Scarlet Sins as direct support for their Sarnia Bayfest show. A surreal experience to say the least. 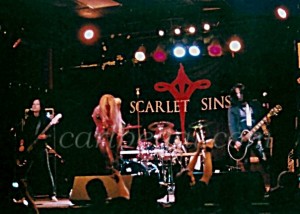 “It was like ‘Fucking pinch me!’ (laughs). Seriously, it was a dream come true. At one point during the gig they were standing sidestage watching us and that was an amazing feeling. It was pretty unreal, actually. I mean, Scarlet Sins on Mötley Crüe’s stage…. I never would have believed it would happen if someone had told me a year before we’d be up there (laughs).”

For the most part, however, Scarlet Sins’ activities have been limited to doing club shows, although there’s a trip to Australia for a string of gigs in the works. The band has built a solid reputation as a result, but it stands to reason that hitting the same cities and towns over the course of a year or two would eventually become an exercise in frustration.

“In one way it is,” NuVynska agrees, “and that’s why we want to get our second album out there. We’re going to be looking into doing some shows in the States and in Europe, because we have to get out to more people if we want to move forward. The thing is, even though we’re only doing these shows in Ontario and Quebec right now, we might play the same cities but each time we show up there are new people in the audience. There are the diehard fans that show up, of course, but we also get people who might have discovered us on the internet a couple weeks or months before. That definitely keeps things fresh for me and for us. I can see that we’re definitely making new fans even though we haven’t been able to do any real touring. I’d like to see us branch out, definitely, but we’re still able to bring people in to our shows.”

Currently in the works, the band’s second album is shaping up to be several steps above and beyond the debut. It will be anything but a rehash even though the same elements behind the music remain. And if Fate plays nice it will include the return of producer Chycki, whom the ladies credit for giving the debut a solid kick in the ass. 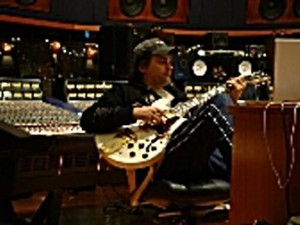 “We definitely want to work with Rich again because we had a great time doing the first album with him,” says NuVynska. “He really made things comfortable. I think we would have felt the pressure a lot more if we’d worked with someone else, but we had a lot of fun with Rich. He taught us a lot about working in the studio… and about red wine (laughs). Rich did an amazing job, so I can’t imagine doing the next album with anyone else, to be honest. Hopefully he’ll have the time for us when we’re ready to go. We’d like to have the album out by the end of the year, but I don’t know if that’s going to happen. It’s too early to say. If not by the end of this year it’ll be early next year for sure. We definitely want to get the new album out there, but we’re not going to rush it.”

Asked for her take on the Scarlet Sins debut now that it’s nearing its second anniversary, NuVynska says she has no regrets.

“I was actually listening to it a while ago when I had to make a long drive, and I still love it. Sure, there might be a couple things about it that I’d change if I could do it again, but I think that’s natural for any artist when they create something and then go back and take a look at it. It’s definitely not something I worry about, though. I’m really, really proud of the album. Absolutely.” 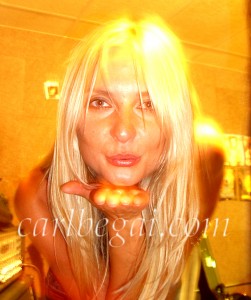