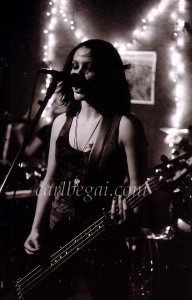 The induction of bassist Tanya Nicklaus to Scarlet Sins’ ranks was an important step forward, offering Bishop and NuVynska some real stability beyond their own commitment. It was a case of dumb luck working in the band’s favour – and not for the first time – as Nicklaus had added bass guitar to her repertoire mere months before Scarlet Sins went in search of a new four-stringer.

“Yeah, I was a guitar player for about 10 years,” says Nicklaus. “I was in between bands when I picked up the bass. I just decided to buy one and try to put some demos together at home on a four track. I wanted to write and I didn’t want to have the pressure of being in a band, having to come up with something right away. So basically I decided to figure out a new instrument so I could play both parts for the demos. It’s funny because Cris and I were friends and we’d get together for coffee sometimes. At one point I just asked her what was up with Scarlet Sins and she told me they were having problems with their bass player. It was like, ‘Holy fuck, you know what? I can play bass!’ (laughs). Obviously I needed to work on my chops because I’d picked it up only a couple months before, but I knew a lot of the theory from having played guitar for so many years. It was a natural transition for me.”

Nicklaus, like Bishop, moved from Ottawa to Toronto in the interest of making music on a professional all-or-nothing level. Scarlet Sins offered her that chance, but her desire to join stemmed from being aware of what the band was capable of rather than the need to fill a void.

“I’ve been in bands since high school, but Scarlet Sins is the first serious band,” Nicklaus admits. “I was a fan of Scarlet Sins before I joined them, actually, and I loved the music. I used to go to their shows in Toronto, I’d be one of the faces in the crowd, and I saw the magic and potential in what they were doing. I thought the music could go somewhere and I wanted to be part of it. It’s great to see that people are interested in what we do, absolutely. Being an artist, you want to get a reaction from people. You want to know that you’re touching people, that’s what it’s all about.”

As an independent band Scarlet Sins can be proud of the international notoriety they’ve achieved, even if it is an underground cult favourite status. The search for a record label is on, and has been for quite some time, but according to Nicklaus the current lack of big league representation is a matter of choice rather than the suits not being interested in the band.

“The thing is, we’ve been a self-managed and self-funded and self-everything independent band for the longest time. We just haven’t found a person or a deal yet that we consider fair to us. We feel that because we invest so much of ourselves in our music, we’ll keep doing things this way until someone can really prove to us that they can come in and do a better job than we can on our own.”

The focus at press time was on Scarlet Sins’ all important second album. Nicklaus makes it clear that it won’t be a rehash of the debut.

“We definitely want to go into the studio before the end of the year, and the new material… to me it sounds different from the first album. When I joined the band two thirds of the songs were already written, so even though I did collaborate on the rest of the songs that were written I didn’t feel like I had that big of a part. The new album, we started from scratch, and with Elie being in the band on top of it all and bringing her influences in, it makes for a very different type of album.” 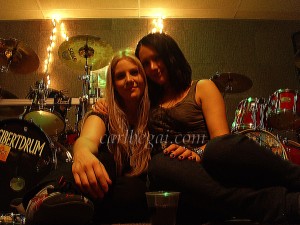 With Bertrand in the fold for close to two years now, Nicklaus expects the new album will be several steps above and beyond the debut. With all due respect to John Pacheco, who handled the drums on the debut, Bertrand was the missing link needed to push Scarlet Sins forward.

“Elie just came in and she blew us away. We’d been looking for a drummer for quite some time, and we recorded the album without her because we didn’t want to lose the momentum we had going. We started looking for drummers once the album was finished, but the ones we auditioned just didn’t cut it. We kept searching and I found Elie on MySpace, so I got in touch with her and we just started talking. Her stuff was great, but she wasn’t used to playing the double kick and stuff like that, but she got into it right away. She sent us a video clip audition from Montreal, and when we got it…wow. It changed our expectations completely. And she’s come a long way since then.”

“The new music, it’s still heavy, and we’re listening to more and more metal all the time,” she adds. “Just the shows that we’ve been to recently – Trivium, Lamb Of God, really wicked bands like that – of course we’re going to be influenced in some way. All four of us are involved in the songwriting this time; it’s a collaborative effort. We’re all working really hard and everybody pulls their own weight in this band. It’s a lot of hard work and I a lot of bands out there don’t realize just how much work and dedication is involved in getting from Point A to Point B.”

Which means there could well be a couple up-tempo shit-kickers on the new record, just to break the trademark Scarlet Sins groove up a bit? 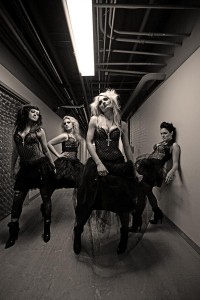 Along with the buzz of a new album, Scarlet Sins also made some noise earlier this year with a glamour shot photo gallery on their official MySpace page. Questions arose as to whether the next record would feature a re-invented, more image oriented band.

“No, that wasn’t us trying to establish an image at all,” Nicklaus states. “It was just an artistic fashion-y type of shoot. We’ve had other photo shoots that have been more serious, so it’s not like we were going out there trying to project an image or anything. That was just how we felt. We are women, we do have moments where we feel more feminine than others, and there’s nothing wrong with that.”

That said, was it hard retiring the high heels? Long time fans will remember Nicklaus’ early days performing with the band and matching NuVynska for height thanks to some ominous footwear…

“(Laughs) I love to wear heels; it just depends on the context of doing so. I can’t do it on stage anymore because if you wear really high heels and at some point end up wobbling on your patchcord you’ll end up on your ass. Somehow that kills the magic (laughs). It wouldn’t be too rock n’ roll, and I don’t want the stage show to suffer.” 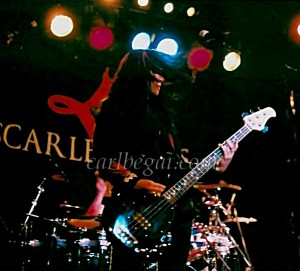