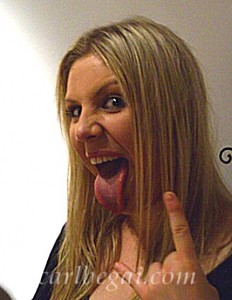 Montreal-born drummer Elie Bertrand is the push that made Scarlet Sins move.

Taking nothing away from her bandmates of course, who recorded the debut album with the very capable John Pacheco (Fall And Divide) behind the kit as a session drummer, but Bertrand’s entrance solidified Scarlet Sins’ direction and enabled them to take their music to the next level. The fact she was a mere 17-years-old when she auditioned (in 2007) mattered very little once the band heard and saw her in action

“Well, I didn’t tell them how old I was, but I didn’t lie either,” laughs Bertrand. “They didn’t ask me at first so I didn’t say anything. I think it was Cris that finally asked me how old I was so of course I told her, and I guess the girls weren’t expecting anything from me because I was so young. I mean, John was playing drums before I was even born (laughs). But I’m here, so I guess the age thing really wasn’t a big deal. I sent the video of to them of me playing, and then I drove down to Toronto with my dad for the audition, so they never made a big fuss about it.”

Bertrand reveals that, like bassist Tanya Nicklaus, she wasn’t looking for a band. If anything, she can blame her father for getting the ball rolling.

“It’s kind of weird how it happened. My dad saw that Scarlet Sins was looking for a drummer and he played me the music just for fun, and I really liked it. So, Tanya and I exchanged emails and that’s really how it started. The thing was, my future was kind of planned out because I knew where I was going. I was accepted to the best college for music in Quebec (Cegep Saint-Laurent in Montreal) – picked as the top drummer in the whole province, which was wicked – but when I met the girls I just didn’t care anymore. I loved the girls, I loved the music, the girls knew where they were going, and it just felt right. It felt like I had to be part of it.” 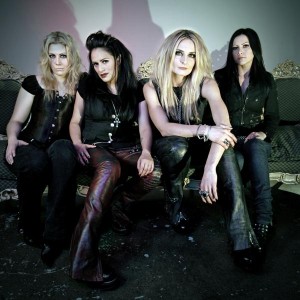 “It’s funny because prior to knowing Scarlet Sins even existed, in the back of my mind I knew I wouldn’t go to college,” Bertrand adds. “At least not as things had been planned. My parents were cool with it because they’re musicians as well, and at one point my mom was making a living making music. They still want me to go back to school – I got The Lecture and all that (laughs) – but they’re really supportive. I’m very lucky to have that, for sure. They’ve always been there for me. My dad drove me down to Toronto twice for the auditions and helped me move down here. It was hard, but I think they knew it was the right thing for me. I think they knew that if they said no I’d just do it anyway.”

While vocalist Sylvya NuVynska can be considered Scarlet Sins’ seasoned veteran, having done several years on the circuit with Surface Underground, Bertrand cut her teeth as a live performer at an age when most girls are concerned with coordinating their newest outfit with their favourite chewing gum.

“I was really lucky in that my parents are musicians, so I was surrounded by musicians growing up. I started playing drums ‘professionally’ in bars when I was about 14, so I gained a lot of experience by doing that. I think that’s a major reason why I’m able to play in Scarlet Sins, and I don’t think I’d be at the level I’m at if I didn’t have that experience. There’s so much to learn before you feel comfortable on stage, and the other girls had been together for so long, but my background gave me what I needed to do this.”

According to Nicklaus, an added requirement for Bertrand joining the band outside the personal chemistry and musical ability was trading her native French for English as her first language. At least for band-related activities.

“Oh yeah, that was brutal (laughs). That was even before I moved. I did my audition, got the gig, a couple weeks later I flew down to do a photo shoot, and after 24 hours of this lady playing with my hair Tanya tells me ‘We’re not speaking French anymore because you need to practice your English.’ It was hard but it was good, and I think she did the right thing.” 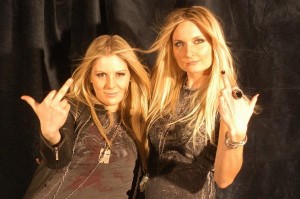 Not that French is taboo in the Scarlet Sins camp. Bertrand and Nicklaus do interviews in their French as required and the ladies have been known to fall back into the language in party situations. Out of necessity…

“We just do it to piss off Sylvya (laughs). Cris speaks French too and Sylvya used to hate French class in school because she had horrible teachers. Our new soundman is also French Canadian so it’s pretty hilarious when we get her going. She’s my big sister, I have to make her life rough. That’s in my job description.”

Despite being a trained musician, entering the world of Scarlet Sins and metal in general was an eye-opening experience for Bertrand. You wouldn’t know it by listening, but in some ways she had to go back to square one and approach the drums as a new discipline.

“To be honest it was a big challenge,” says Bertrand. “I come from a funk and pop rock background, I didn’t even own a double bass pedal before Scarlet Sins, so it was a lot of work. I practiced the songs on my own for a good three to four months before we rehearsed together, and then the four of us rehearsed for a full month before our first show together. I’d never, ever played anything like Scarlet Sins’ music before so it was really hard, but at the same time I wanted to make the songs mine. The process that I went through, I played the songs exactly how they were recorded and then with time I put some of me in there. The biggest challenge was to keep the essence of the album while I was doing that.”

Was it intimidating at all having a finished album in your face as an example of what the band needed in a drummer and realizing you had to follow Pacheco’s example? 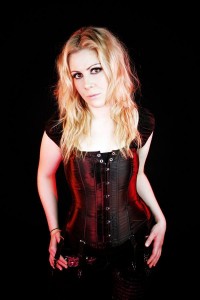 “No, because I’m not like that,” states Betrand. “I think I can do anything, I wanted it, so I just went after it and did my best. When I really want something I work for it, so I didn’t have any doubts, but I definitely had to change my enire lifestyle. I had to start working out just to be able to keep up and do the full set; I run 5 km every day just to be able to play drums, not because I like it (laughs).”

Now a seasoned Scarlet Sins veteran, Bertrand is focused on the writing for the band’s all-important second album. She echoes Nicklaus in stating that fans can expect something bigger and brasher than the debut now that they have a hand in shaping the new songs.

“We’ve written a few songs that just came together from jamming and fucking around after some wine (laughs). Some of it has been really random but it’s worked out really well. I’d only ever written songs in school in the context of a class project, so there was a formula that you used. It kind of sucked the way math does. Real life is different. We’re not writing pop music so there’s a different approach, and I was actually worried about that, but things have turned out really well. I love the new songs and I’m really excited about the next album. We’ve been listening to a lot of Lamb Of God and Killswitch Engage so that’s going to show in the next album for sure. Also, I come from a different background than John, so that’s going to show as well. It’s going to be wicked.” 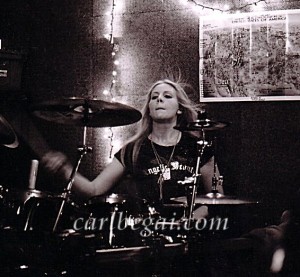