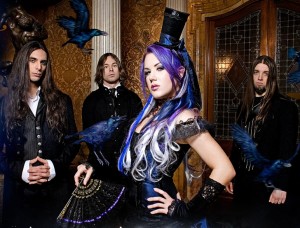 As first albums go The Agonist’s 2007 debut, Once Only Imagined, was a decent start. In spite of the unfortunate title – it’s memorable for the fact you can’t say it even one time fast – and a bumpy track sequence, the album put the band in people’s faces by yielding the brash single and video ‘Business Suits And Combat Boots’ and enabling them to jump on several different North American support tours. Of particular interest was frontwoman Alissa White-Gluz, both for her Gossow-meets-Scabbia vocal acrobatics and her looks, to a point where the music and the guys behind it were often reduced to an afterthought by the press. As if to call these people out The Agonist’s new album, Lullabies For The Dormant Mind, is everything a sophomore record should be, expanding on the ideas and performances put down on the debut in ways nobody could have imagined. This includes the band who, according to Alissa in a 2008 interview with BW&BK, weren’t sure of the direction their second album would take, with guitarist Danny Marino wanting to go down a more melodic avenue with his playing while she was determined to make things heavier. Turns out they both got their wish, although the record does favour Alissa’s frame of mind

“Yeah, I guess I kind of won,” she agrees, “but Danny and I compromised and figured out a sound that we both liked. Honestly, I had no idea what the album was going to sound like until it was done. I was still writing as I was going into the studio. When I first got the raw tracks I was thinking it wasn’t heavy enough, but it turned out really well and we’re both happy with the end result. One thing that worked out really well for us is our drummer Simon (McKay). On the first album we had another guy, but Simon came in and he’s also a guitar player, so he helped with the writing on this album. He did a really good job of bridging the gap between me and Danny because Simon introduced him to black metal guitar playing, which I really like. Danny likes it, too, but before that he was always talking about being more melodic and I was pushing for being heavier. The playing that Simon showed Danny is both of those things, so that definitely worked in out favour.”

Rather than use Once Only Imagined as a blueprint for what works for The Agonist and which ideas are best left on the shelf, the band went into the new record with clear heads clear and open minds. 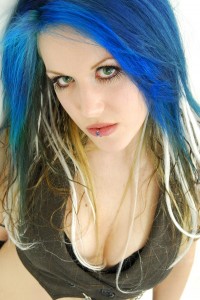 “To be perfectly honest I don’t even remember the order of the tracks on the first album,” Alissa admits. “It’s kind of weird to listen to yourself anyway, so I don’t really listen to the first album. I have been listening to this album a lot, though. I don’t think any of us really looked at the first album at all or drew any comparisons. We just went with what we wanted to do for this one, and we definitely wanted to challenge ourselves. About 90% of the music is Danny coming to jam with a bunch of riffs. Simon will throw his beats on and Chris (Kells) will throw his basslines on and they’ll work on it from there. They give me the scratch recordings and I’ll take them home and try to fit vocals to them, but Danny knows me as a singer so I’m sure he keeps me in mind somewhat when he’s writing. I’ll come up with lyrics, a title, melodies and harmonies, and maybe once or twice in a song I’ll suggest making some changes. Most of the time it’s pretty flawless with them presenting the instrumentation and me coming up with the vocals.”

With the exception of lead-off track ‘The Tempest’, which comes off as a solid book-end to ‘Business Suits…’, the material on Lullabies For The Dormant Mind introduces several new facets of The Agonist dynamic. The guys have stepped up their game without boosting the aggression to trendy stratospheric levels, there’s a distinctive neo-classical atmosphere to some of material, and Alissa’s death metal vocals have become positively volatile.

“The first song, ‘The Tempest’, we actually wrote that around the time we wrote ‘Business Suits…’ so it’s pretty funny you’d make the correlation. That song’s been around for a while. But when I was first given the raw material for the new album I was actually kind of worried. Not because I was super happy; actually it was the exact opposite. It was like, ‘I don’t like this song, I don’t like that song, I don’t know where this is going…’ As I started putting vocals on it I could see how it was working. Also, when the guys presented me with the raw material it was kind of hard to tell what was happening (laughs). As we recorded the album I got more and more excited about where the songs were going.”

“As for the vocals, I think I did that subconsciously,” Alissa says of her schizophrenic performance. “We have so much experience now, and having done all the touring and playing so many shows I discovered what I’m really capable of doing with my voice. Another thing that was really different for this album was that we recorded the songs without ever having played them live. For the first album we’d been playing those songs as The Tempest for years, so I was used to singing them in a specific way. With the new album I was thinking and writing a lot more as I was going, but at the same time I just let things happen. It was like, ‘Why don’t I try this? Hey, it worked!’ (laughs). I can’t speak for the other guys, but I was much more comfortable in the studio this time even though we were rushed. I knew what I was doing so it was a lot more natural for me, so I think I got a better result because of that.” 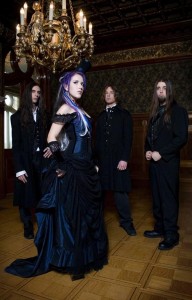 Oddly enough, the centerpiece of the new album is Alissa’s acapella version of Tchaikowsky’s ‘Swan Lake’. A mid-album breather very much out of character for The Agonist, she performs all parts of the score using an operatic voice blended seamlessly by producer and Cryptopsy guitarist Christian Donaldson. Alissa explains her thinking behind what is a captivating track.

“I guess I wanted to use my operatic voice up front, because I use it a lot in back-ups but I never really use it for main vocals. It’s sort of like me saying, ‘Hey, I can do this too…’ (laughs). I’ve always loved acapella music and classical music, and we were thinking about what kind of instrumental tracks or intro tracks we might be able to put on the album. I think the way it began was me coming in to the jam space one day and Danny was playing Samuel Barber’s ‘Adagio’. I love that song, and I remembered that back in high school I’d done a spoken word poetry reading on top of that song. I thought it would be cool to include something like that but none of us play violins or anything like that, so I was trying to figure out how we could pull it off and came up with the idea of getting the score and singing every instrument. We started doing that, and then we realized that ‘Adagio’ wasn’t public domain, meaning there would have been copyright infringement if we used it. I thought ‘Swan Lake’ was also an amazing song, so as an alternative I sang the score for it, which was 30 vocal tracks or something. My producer wanted to kill me but it turned out really well.”

In the end, however the live show will decide whether Lullabies For The Dormant Mind translates well for the fans. Given the depth of the new material – no less than four vocal styles, keyboard and backing vocal flourishes, insane drum performances from top to bottom – one has to wonder how The Agonist are going to pull it off, or if there are concerns that they may have pushed the envelope a little too far.

“Not really. We thought about that in advance, and for a typical Agonist four-piece, yes it would be too complicated to pull off live, but we’ve added a second guitarist (Chris Adolf). I was toying with the idea of adding a keyboard player to play the orchestrations, but it’s hard enough adding one new member so we’re just going to stick with that for now. We’re going to be playing to a track of the orchestrations so we can bring them out just to make it as accurate as we can, but we’ll see what happens. I’m thinking we shouldn’t have harmony tracks just to keep things clear that I AM singing all the different parts. I’m trying to unload some of the back-up screams on Chris, too, so we’re going to try and make things as close as we can to the album. I’m debating if I’m going to have vocal harmonies played through a track or not, because sometimes I find them really cool and at other times I find they make you question if the singer is actually singing. I get that enough as it is just because of the variety of vocals that I do live. I definitely don’t want to add to that myth (laughs).” 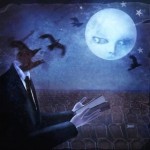 2 thoughts on “THE AGONIST – Hush Little Baby, I Don’t Hear A Word”