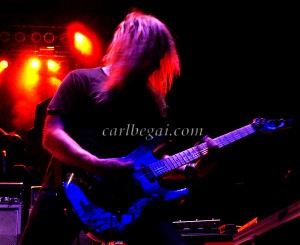 News that guitarist / vocalist Chris Caffery had signed with AFM Records for the European release of his new album, House Of Insanity, came as no surprise to the diehard fans. With his Savatage bandmates in Circle II Circle and Jon Oliva’s Pain having called the German record label home for the last several years it was considered a move long overdue. So it goes that while the focus is on House Of Insanity as far as Caffery and the label are concerned, Savatage fans clamouring for a reunion believe his signing with AFM is another step towards that goal. And while Caffery has gone on record saying he’d take part in a Savatage reunion without hesitation, his primary goal is to remind people he has his shit together as a solo artist. By all accounts the fans are enjoying what they hear. Reactions to House Of Insanity since its 2008 digital release have been positive for the most part, which has added up to bigger sales in comparison to Caffery’s last outing, Pins And Needles. He isn’t rolling in money (yet), but pushing the album more or less on his own has definitely paid off.

“My digital sales, the internet sales, I’ve practically doubled what I did with Locomotive for Pins And Needles, and I haven’t even started radio yet. Locomotive was supposedly trying to do the best they could, but when I go to the mall in every single city I’m playing a show in (with the Trans-Siberian Orchestra) and there’s no CD in the stores, and then they blame me because the record’s not selling… you can’t do that. With TSO behind me it shouldn’t matter if I burp and fart on a record, I should be able to sell a certain amount of albums, and I didn’t want to see what happened with Pins And Needles to happen to House Of Insanity. If the thing isn’t going to sell then I want to earn my own blame.”

“Some people were telling me that if I sold the album through my website I wouldn’t be able to show people SoundScan figures, but I don’t care about what people think,” he adds. “At the end of the day I care about making sure people have the records and I’m able to afford to make another one. If I’m SoundScanning a million records, fine, but if you’re talking about a difference of 1,000 or 4,000 sold I don’t really care about that. Business is so bad that it’s not going to change my life that much to have a little bit better SoundScan news.” 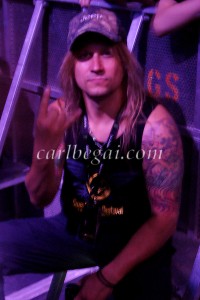 Caffery’s efforts and the resulting success have proven that unless an artist is signed to a major label in this day and age, one is probably better off doing things independently. There’s more work involved, absolutely, but you also have complete control of how the album in question is marketed.

“That was the biggest problem last time, because Pins And Needles was so different that it needed a major push,” says Caffery. “It needed me to get to a different audience, and without that it was kind of a waste of the record. It was thrown out there by some people as ‘If you love Savatage you’re going to love this…’ and it was nothing like Savatage. I wasn’t expecting anybody to think it was like Savatage. I think Pins And Needles will one day get the attention it deserves. I listen to it once in a while and it’s so… odd. It was a really different record, but I definitely think it won a few people over.”

“The thing I look for is the fan feedback, and that’s what’s been the best. With Pins And Needles some people liked it, some people liked some of it, but on this record the majority of the fans like all of it. To me that’s the most important thing. The feedback has been amazing, and that’s why I did this record. It’s me being a fan of the bands I was in and the album is something I can listen to and really enjoy. I’m really proud of it and I think the Savatage fans are going to listen to it and love it.”

With the European release of House Of Insanity a done deal Caffery is looking into touring possibilities. The popular view amongst Savatage fans seems to be that, if the band isn’t going to reunite, having a Chris Caffery / Jon Oliva’s Pain / Circle To Circle package on the road would be the next best thing. A distinct possibility with the AFM deal now in place. Or not…

“Yeah, but I think people would be expecting to see something very Savatage, and it’s gotten to the point where I’d like to go out and do something that’s not directly related to Savatage. I could sell to the Savatage audience, but I think I could also sell to the people who aren’t into the band. I think Savatage is eventually going to play together one day regardless of what people say or don’t say, so a part of me doesn’t want to take away from that.”

Caffery reveals that writing for the follow-up to House Of Insanity will begin this summer, barring any tour opportunities that come his way. 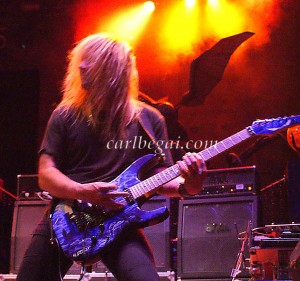 “I actually want to write three instrumentals for the next record which is something I haven’t done,” he reveals. “I’m looking forward to it because I think I’ll be in a really good frame of mind when I do it. I’ve got to tweak my studio a little more because I know what I need to make it sound a little better than House Of Insanity and to improve my writing. I think it’ll be a much more relaxed process.”

Begging the question of whether or not he intends to use the same “me, myself and I” recording technique when he’s ready to get down to it. Meaning Caffery, his gear and the cat locked in the studio for months on end, surfacing only to record drums in a different location and grab the occasional ray of sunlight.

“I’ll probably stay with doing it by myself because I just liked doing it that way. As much as it was a pain in the ass I enjoyed it because it gave me the ability to correct my mistakes and not be looking at a bank account the whole time. When you’re in a studio and you’re paying for everything you have a tendency to sit there and go ‘Oh Jesus, if I don’t finish this I’m going to go over budget…’ and I didn’t have that at all with House Of Insanity. The only frustration I had was going back and fixing something I didn’t like.”

For now, however, Caffery is focused on continuing the independent promotion and sales in motion at home while AFM takes care of things overseas. A situation that sounds potentially chaotic, but Caffery prefers it this way.

“You know what? That’s the beauty of having an independent record. You don’t have to sell it instantly. That whole idea was ridiculous to me. I mean, why does a record have to get everything done that it needs to do in the first month of release? I mean, Guns N’ Roses released their first record and after a year it was ‘only’ Gold. And the next year it sold 25 million records because some things take time to develop. Your cards have to fall in the right place and I didn’t want to not have the record out during the last TSO tour. I told people they were going to be able to listen to it by October 2008 and I wanted to hold true to that. The actual release is happening now, which is fine because sales have been good so far. Things are definitely moving forward, which is a great feeling.” 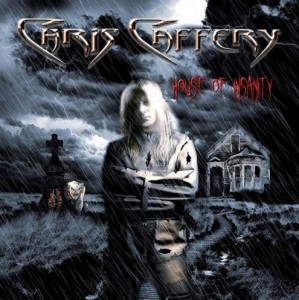 Click here for a review of House Of Insanity. Go to this location for more discussion with Caffery on the album, and click here for an interview with JON OLIVA’S PAIN drummer Chris Kinder, who mastered the record.

– All photos of Chris Caffery by Carl Begai.