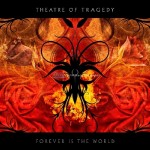 Theatre Of Tragedy have always been good for a surprise. From ditching all growling vocals from their repertoire following a smash hit breakthrough album (Velvet Darkness They Fear), to going from doom-goth to electronica (Musique and Assembly), to firing singer Liv Kristine in 2003, to returning to their goth roots with a new female vocalist (Storm) the band has lived, breathed and occasionally died at their own hands for over 15 years. That said, fans are likely expecting something off-kilter to happen on Forever Is The World, but no one could have predicted male singer Raymond Rohonyi’s growls to return following years of swearing it would never happen. The beast is indeed back in form, although a bit more refined and used sparingly in that Rohonyi only appears on 50% of the record (and growling over only half of that). It falls to female vocalist Nell Sigland to carry Forever Is The World, and against all odds – specifically the revered legacy Liv Kristine left behind – the moment she appears it’s immediately apparent one is listening to a true Theatre Of Tragedy album and not a feeble, directionless attempt to recapture past glories. Forever Is The World is a remarkably well executed mix of Velvet Darkness They Fear (‘Hollow’, ‘Hide And Seek’, ‘A Nine Days Wonder’) and Aegis (‘Transition’, ‘Revolution’, ‘Deadland’) yet it doesn’t feel like a rehash even for a moment. If anything it’s more of a trip down memory lane with an eye on the future, right down to a tip of the hat to Musique’s controversial techno vibe (‘Astray’) and the title track’s hint of ‘A Distance There Is…’ from the self-titled debut. The only complaint to be made is directed at the anti-goth album title, but given the honesty of the music and the resulting happy-as-a-pig-in-shit grin on my face one misfire is easily forgiven.