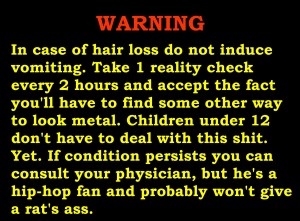 Back in 1996 I attended seven shows on Iced Earth’s first European tour in support of their fourth album, The Dark Saga. I wasn’t a huge fan of the band, but having Nevermore on the bill as a support / co-headlining act made the tour time well spent. Admittedly, even though Nevermore dominated every night Iced Earth put on a solid show and The Dark Saga grew on me in spite of being the trendy album of the moment. Overall, a great touring package and some pretty incredible experiences over that two week period.

A couple shows in, however, I noticed that there was an unusually large number of women in the audience. “Unusual” because Iced Earth’s traditional metal sound and Nevermore’s neo-thrash insanity wasn’t known for attracting large numbers of the fairer sex. But there they were, night after night and boob to elbow, headbanging and screaming their approval at the stage. At which point I realized what it was that had a large majority of the ladies hanging around the backstage door, the tour bus, and crushing into the first few rows for a closer look.

Nevermore frontman Warrel Dane’s trademark, other than his one-of-a-kind voice, was his hair. Blonde locks that fell to his waist, seemingly more than enough to get long suffering Sebastian Bach fans in the door to see what all the fuss was about. The other guys in the band were no slouches in the follicle department, either (see video below).

When Iced Earth vocalist Matt Barlow hit the stage 75 minutes later, however, Dane was nothing but a distant memory to the screaming estrogen powered throng (more video below). The dude had more hair than Cousin Itt from the Addams Family, and the fact is was like a cloak of red was enough to send all the older girlies who once thought Jon Bon and Joey Tempest were the shit into spastic high pitched natterings of “Ohmygod…” and the like.

I had first hand experience in dealing with this last bit of whacko behaviour because the Idiot Woman that I was foolish enough to be with at the time was one of them. In fact, she couldn’t even name more than three Iced Earth songs and perhaps two Nevermore tracks… and those only because Dane introduced them before belting them out.

Yep, she was shallow as a wading pool full of rocks, that one…(and I believe this song was written for her).

Fast forward to 2003, when Barlow announced he was leaving Iced Earth for a career in law enforcement. A noble pursuit, and one that meant his hair would have to go. Thus, when pictures of Barlow in his new brushcut surfaced a few months later I swear I could easily hear the banshee wail of denial led by IW and chorused by her Moron Ilk from 1,000 miles away. Hair made the man it seemed, and the moment it was gone he was officially a non-cool entity and easily the stupidest person alive for doing such a thing.

(Add another boulder to that wading pool).

I recently stumbled upon pictures from that tour, and I began looking at the razor in the bathroom. I’ve been losing my hair for years, I’m 40 years old, and I’m thinking it’s time to do the deed. It’s not like the hat I wear on my head is fooling anybody, least of all me. Besides, the amount of hair a guy has growing out the top of his head doesn’t define how metal he is in this day and age. No question, it’s a badge of honour and a source of pride for those lucky enough to have a populated scalp, but hair is by no means pre-requisite to be a part of this club. At least it shouldn’t be.

Do you like it loud? Good, come on in. Just don’t spill your beer because that’s just plain wrong.

Sadly, even though I know it’s the smart thing to do, I’m torn. I’ve seen the Carl Begai baby pictures and the truth is I’m cursed with a head that would make Humpty Dumpty green with envy. Shave off what’s left of my hair and I look like an egg with a beard. Not a nicely shaped Bruce Willis cranium, no chance for a smooth Devin Townsend skullet or even a lumpy looking Halford buzz. Get rid of my hair and I’d look like someone’s breakfast before the King’s horses and men came to crack me one on the noggin. Mom and Dad, I love you, but your genes were on something questionable during that first try.

So, what to do. I’m quite content hiding under my Backwards Baseball Cap Comfort Zone, but I really should move forward. That said, I’ve narrowed down my options to the following:

— Get my hat surgically attached to my head. Great in the rain but it would make reclining a bitch, and you never know when that skill will come in handy.

— Rent out my scalp to Google Earth for ad space.

— Hunt down a warehouse stocked with that spray-on hair from the ‘80, maybe get into graffiti art on the side and never go out in the rain again.

— Call MuchMusic and tell them if they donate some $$ to me and $50,000 to the Breast Cancer Society of Canada, we can arrange to get Bif Naked to shave my head on live TV.

— Shave the head and become a spokesman for humane treatment of chickens and eggs everywhere.

— Start the Hair Club For Metalheads… just as soon as I figure out what Barlow did with all that hair when he became a cop.

I’ll keep you updated with my progress and the waffling that will most certainly accompany it. In the meantime, the suggestion box is open.

4 thoughts on “The Rise And Follicle Of A Metalhead…”