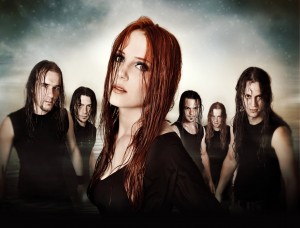 Change has been a regular visitor to the Epica camp over the last few years, all in the interest of keeping the band moving forward. Original drummer Jeroen Simons left the band in 2006 and was replaced by God Dethroned’s Ariën van Weesenbeek for the recording of the band’s all important third album, The Divine Conspiracy. More recently, guitarist Ad Sluijter stepped down of his own free will, making room for ex-God Dethroned shredder Isaac Delahaye to add a needed touch to Epica’s most recent work, Design Your Universe. The time in between the two records brought what was perhaps the most significant, albeit temporary, change to the band’s line-up. Sidelined by a bacterial infection (MRSA) in 2008, vocalist Simone Simons was replaced by collaborator / vocal coach Amanda Somerville for a North American tour with Symphony X. A bold move that raised eyebrows and questions, with Simons’ future as Epica’s frontwoman in doubt as far as rumour mongers were concerned. In the end Simons made a full recovery and reclaimed her rightful place behind the microphone, much to everyone’s relief, including Somerville.

Guitarist / founder Mark Jansen, the man responsible for putting Simons in the spotlight with Epica’s debut in 2003, freely admits her health issues gave him a scare.

“I was very worried. Simone was ill and we didn’t know what was wrong at first, which was terrible. We did a great job with Amanda fronting the band, but without Simone it’s not Epica. I was happy when they figured out what was wrong with her and that she was able to get treatment, because it could have been the end of the band. Going on tour without Simone wasn’t an easy decision and it was never a little thing, but we’d promised Symphony X that we’d go on tour with them. This was a few months before the tour so we had hopes that Simone would get better, but unfortunately she wasn’t so we had to find a replacement for her because Symphony X wanted the certainty that we’d go out with them. It was a risk for Epica and Amanda to do the tour because you never know if people are going to start throwing tomatoes at the stage (laughs). There was a lot of skepticism before the tour, but almost everyone we talked to loved the shows and were surprised that we could be so good with a different singer.” 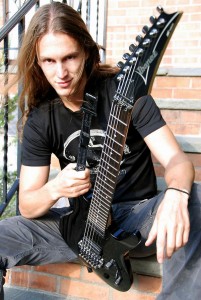 With that obstacle course behind them Epica turned their attention to working on The Divine Conspiracy’s follow-up. An unexpectedly guitar-oriented album given Epica’s previous big-ass-symphony-über-alles approach, it presented the band and Jansen in particular with a new set of challenges once Ad Sluijter made it known he’d had enough.

“When the songs were about 80% written, that’s when it got hard because Ad wasn’t so motivated anymore and I really needed to work with someone that was full of energy,” Jansen explains. “Coen (Janssen / keyboards) did quite a lot this time but I was missing a sidekick, so when Ad announced he was leaving the band it was a sad moment, but when Isaac came in he was exactly what I needed to keep going. It was also a lucky thing for us finding him because the new album wouldn’t be as good as it is if he hadn’t been involved. When Isaac came in we still had over two months before we were due to go into the studio, so we went back and redid about half of the songs. As a result the guitar parts sound really different from the past. Sometimes when you get someone new in it’s what the band really needs for new inspiration and energy.”

According to Jansen, Sluijter’s departure was a surprise to everyone in the band except him:

“On the last two tours we did Ad spent a lot of time alone; he was always the first one to go to bed and the last one to get up. I asked him one time if everything was okay and he told me there was nothing to worry about. I actually told the others that it wouldn’t surprise me if he decided to leave the band at some point but they didn’t take it seriously. After the last tour Ad told me he had to quit because he wanted to be home more, and because he didn’t have time to compose since Epica was on the road so much. He honestly felt it would be better for him and the band if he left, because if he couldn’t motivate himself he couldn’t motivate Epica. We’re still good friends, I’m in touch with him almost every day, so there are no problems between him and us at all. I think he did make the right choice for everyone.”

Jansen’s claim of taking inspiration from his bandmates isn’t idle chatter. Without their input, he says, Epica wouldn’t be where they are today.

“I think that’s the only way to create a really great album. I’m sure there are bands where one guy gets all the credit for writing the songs, but in Epica I wouldn’t be able to create an album like this without the input from the others. Those guys are as important as I am to the Epica sound and we do this together. I compose a lot of the basis of the songs, but when we get together and work material, that’s how it gets to the next level. I wouldn’t be able to do it alone.” 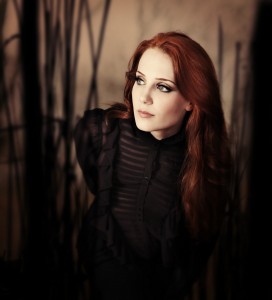 “I think Simone has definitely grown as a vocalist. We did an extended pre-production this time. We went into the studio with Sascha (Paeth / producer) and Amanda to work on lyrics and vocal lines. The vocal lines are the most obvious thing on any album, it’s what they recognize right away, so we paid the most attention to that part in the end. I’ve noticed that with each album more and more of Simone’s vocal lines get used, so she’s definitely developing with each album. And I think it’s hard to come up with vocal lines for an album like this because it’s written for the music and not just the vocalist, so Simone did a really good job.”

“You shouldn’t get too extreme, I think, because then there’s no room for female vocals anymore, and that’s not the way we want it. Simone is a big part of the band and she needs room to work just like everyone else.”

As significant as the change in guitarists and Simons’ influence are in Jansen’s eyes, Design Your Universe doesn’t start on an inspirational note. If anything the orchestral intro is downright boring, a predictable soundbyte that could have been cut and pasted from any of Epica’s previous records.

“I actually got the same reaction from Sander Gommans,” laughs Jansen, referring to his old After Forever bandmate. “I played him Design Your Universe and after the first song he asked me ‘Aren’t you able to do something new? I’m a bit disappointed that you’re still on the same track.’ I just told him to keep on listening (laughs). It’s a lot heavier than he and a lot of people expected. You really have to listen to the whole album before judging it. That’s why I asked Sander to listen to the other stuff before coming to any conclusions. From that point he kept giving me the thumbs up as the album progressed.”

“We tried to do some things that we’ve never done before,” Jansen continues. “The guitar solos, for example, Ad was a solo guitarist but he didn’t want to play any, and you can’t force someone to do something they don’t want to do. So this is really the first Epica album with real guitar solos on it, and I loved working on them with Isaac. He would try out different solos on the songs and we’d decide which ones worked the best. It was fun to play around with them and work in that way. I’m very happy about having Isaac in the band. We wrote more and more with the guitars this time. In the past every song was built up starting with the orchestra, but this time half the songs started with only guitar riffs. For example, ‘Martyr Of The Free World’ and ‘Semblance Of Liberty’ were written completely on guitar and we added the orchestral parts here and there. It was a completely different way of working, but that’s what I mean by keeping yourself motivated and challenging yourself by doing something differently.” 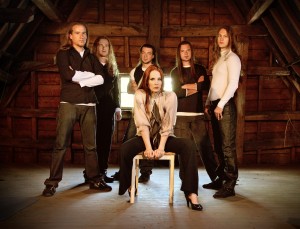 Design Your Universe is an important step in Epica’s album-to-album growth, with the things that it doesn’t do being just as important as what the band manages to pull off. Last time out they released the catchy yet safe ‘Never Enough’ as the first single and video from The Divine Conspiracy; perfect for garnering attention from the ‘Amaranth’-loving Nightwish crowd. Ultimately a problem for Jansen and his vision for Epica.

“Yves (Huts / bass) wrote that song, so it’s hard for me to criticize a song that I didn’t write myself. It’s a cool song but I don’t think it fit on The Divine Conspiracy. Maybe we shouldn’t have shot the video for that song, either, because people watch it on YouTube and think that’s what the whole album sounds like, so they got the wrong impression. I think for some people Design Your Universe will be a shock. We have some mainstream-oriented fans and I think they might find it harder to get into this one compared to the last album. But, as a band you have to set your goals and motivate yourselves, and we’re much more motivated to go in a heavier direction. I think that’s the only way to survive, because if we were to go in a mainstream direction as more people want I don’t think Epica would exist anymore. Playing those kinds of shorter simple songs on stage, there’s no challenge, it gets boring.”

It’s worth noting that Epica have managed to progress with each album in spite of working with the same production team since 2003. Just like Kamelot – the band from which Epica took its name – they’ve been able to expand on their original formula rather than stagnating, as expected, when one stays in the same place long enough.

“I think it can be dangerous, yes,” Jansen agrees, “but the Gate Studios team (in Wolfsburg, Germany) is like us in that they want to improve themselves by trying new stuff so we’re safe there (laughs). That’s Sascha’s thing; we come up with new ideas and new aspects, and he discusses with us how we want the album to sound. Every time we go into the studio with him, Sascha has some ideas and they’re really great. If he’s able to keep improving himself the way he does we can keep working there because Gate Studios has an amazing team and they always go for 100%.” 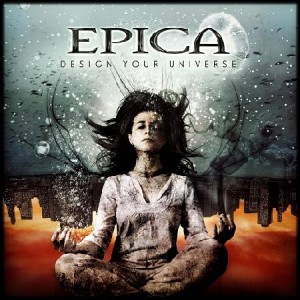 Go to this location for information on Design Your Universe and audio samples. If you’re a fan buy the album, don’t download it. Only trendy wannabes with no lives and no respect for art do that.

3 thoughts on “EPICA – Progress By Design”