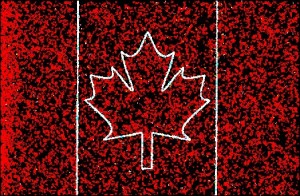 Being as I’m a proud Canadian with ridiculously excellent taste in music 😉 , I thought I’d offer a brief update on several hoser-related activities with regards to new releases, tour dates and general ass kickings. Lots going on with my Canuck brethren, as you’ll see…

(For those of you that don’t know what a “hoser” is, it’s used here as a term of endearment to describe my fellow Canucks. The official scientific explanation, assembled after several hours of watching Bob & Doug McKenzie, can be found here).

DEVIN TOWNSEND is back with a new album entitled Addicted. The second of a four part showcase of all things Dev, this is a big rock record done in the spirit of his classic Ocean Machine album. Check out my review here. And because this page lights up like a Christmas tree every time I mention the man, I can tell you that an interview will be up next week. For those that want a tease, however, I can tell you that Devin has revealed he will NOT be playing any Strapping Young Lad material on his upcoming tour. Go to this location for audio samples and to purchase Addicted.

The lovely folks from The AGONIST – okay, she’s lovely, the rest of ’em are hairy – are heading to Japan for two headline shows in February, on the 11th and 12th in Osaka and Tokyo respectively. The start of many future appearances in the East, mark my words. Bad ass new video for the song ‘Thank You, Pain’ at the bottom of the page, my interview with vocalist Alissa White-Gluz from earlier this year is here.

ANNIHILATOR have just released a new CD / DVD, Live At Masters Of Rock. I’ve gotta say, I’ve been a fan for years but the latest set-up with Jeff Waters and Dave Padden trading on vocal duties and both doing the guitar shred thing is stunning. Killer show, great footage, and the last half of the package featuring the band’s old school classic material is a kick. Padden doing ‘I Am In Command’ is sick, and the band yanks ‘Wicked Mystic’ out of their bag of tricks. Footage below from the DVD of the band performing ‘Clown Parade’…

New rumblings from eternally independent doom gods WOODS OF YPRES. You can check out streams of each track from Woods IV: The Green album here. Details with regards to ordering the record and thus support founder / frontman David Gold in his mission to scare the living shit out of the folks at the post office at this location. Gold has also outdone himself with regards to Canadiana; last album he wrote a song about Ontario, this time he sings about Toronto’s Mt. Pleasant Cemetary.

Montreal hyperblast legends KATAKLYSM will be hitting Europe in January as they gear up to go back into the studio for their next studio album. Frontman Maurizio Iacono is also planning on putting his ridiculously successful Roman Empire project EX DEO back on the road in 2010, proving once again that he doesn’t believe in downtime. A review of the debut album, Romulus, here.

London, Ontario’s KITTIE will also be hitting Europe in January (see here) supporting their new album, In The Black. I used to hate the band, but the new album is a shot in the arm and a hell of a lot more fun than some stupid H1N1 vaccine. Check some audio samples out on their MySpace page.

My brothers in FRAZE GANG have a new three song EP entitled Don’t Call Us available for online purchase at CDBaby and iTunes. Audio samples are also available. No, they’re not metal, but far from powder puff fluff that passes for melodic rock these days. Features Greg Fraser and Stevie Skreebs of BRIGHTON ROCK fame and drummer Phil Epp, he of the big machines, bonfires, and excellent taste in beer 😉

I also have it on good authority that plans are afoot to have BLACKGUARD hit Europe at some point in 2010. After spending most of this year laying waste to the US – a long time dream for the Brew Crew – they and the powers that be have decided it’s time to branch out and educate the European kiddies in the fine art of a Quebecois-inspired Circle Pit. Details to follow.

Toronto’s legendary thrashers SACRIFICE are also in the process of making their comeback official, doing some live gigs here and there in anticipation of the January 2010 release of their new album, The Ones I Condemn. The album is the first album with the original Sacrifice members since 1991. Home town metal icon Ray Wallace would be proud.

On Saturday, December 12th VOIVOD will headline Club Soda in Montréal. It’ll be the band’s first headlining show in Montréal in ten years. The show is also being billed as a release party for their DVD, Tatsumaki: Voivod In Japan 2008, which was officially released on November 17th via MVD/Conveyor/Universal.

Ex-SLASH PUPPET vocalist Mif has issued an unreleased video from his post-Puppet band THD, featuring Toronto musicians Michel Scotta (guitars), Lionel Tissot (bass), and Brent Niemi (drums). The band recorded and released one independent record and produced a video for the song ‘Should I Die’ in 1996. Mif is gearing up to re-release the THD album in 2010, albeit in limited quatity. More details to follow. In the meantime, he continues to terrorize folks on the Disney XD network as Dr. Necros on the show Aaron Stone. We talked about that and the conversation ended up here.

And on a somber note, Toronto’s SCARLET SINS have decided to call it quits after only one album due to creative differences. A sad ending to what could have been great, but the ladies are all working on new projects. More details as they become available, but new music is due to surface from the ashes sooner rather than later.