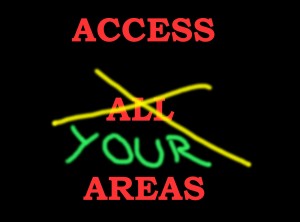 All this talk about Tiger Woods going off to play extra holes on the back nine with most of America’s female population got me thinking about how his wife must feel. Having been married and likewise screwed around I have an idea of what she’s going through on the inside, although the pain and sense of betrayal are undoubtedly worse for her given hubby’s popularity, his bullshit squeaky clean image, and the media’s need to splatter every little bit of info all over this side of the universe.

Like Woods, my ex-wife was (is) an idiot. Looking back on it now I shake my head and wonder “How much stupid did they put in that head?” Not because the relationship going to hell still bothers me – nothing could be further from the truth – but because there are rules about self-absorbed ego-bitches being allowed to fraternize with decent people. Or at least there should be.

Back in the spring of ’96 I returned to Toronto after eight months of living in Germany. I was due to be home for seven weeks but I returned to Europe after only two. It turned out that while I was away Idiot Wife and Her Best Friend decided to do their best Banger Sisters impression and kiss ass onto a tour featuring two popular American metal bands winding its way through Europe. While that didn’t bother me, the fact that the few phone conversations we had (this was before mobile technology, remember) were very short and unsweet. The kind of conversations you have with someone who really doesn’t care if you have a stroke mid-sentence, or would actually prefer that you did. Having been married only a year at that point it was very disconcerting.

I’ve always trusted my gut instinct, particularly when something feels wrong, and this was no exception. Thus the abbreviated trip home, and a cold reception upon my return to Germany. It turned out that Idiot Wife and Her Best Friend had decided they would be heading to one more show on the tour that had made them so wet. It was to be a Girl’s Night Out and my return had put a damper on their pubescent “OhmygodohmygodohmyGAWD!” Twilight-esque glee. I was not welcome to join them.

(I’m not mentioning the bands on purpose, as both acts are still active and happen to be very cool people. I also find it hysterical that music has had a major influence on every aspect of my life).

Alarm bells were going off in my head, I could sense something was up – the Access Your Areas pass around her throat was food for thought – so like any husband with a brain I put my foot down.

It was classic. One of those moments straight out of some drug-addled talent-free Hollywood screenwriter’s back pocket. After another war of wits and words she told me she was going out to do some shopping to cool off… and didn’t come back for five days. Suffice to say that I didn’t have a good time of it, did a lot of soul searching, and waited for Idiot Wife’s return. Idiot being the key word.

When she finally got home we had it out. I blew my top and she decided to feel bad, explaining that she’d been upset by our initial bout and needed the time away to get her head straight. To reassure me that her actions were of the straight and narrow variety she showed me a stack of pictures from the show she and Her Best Friend had attended. All innocent of course, as they’d only been at the gig for a few hours; just some shots of them with band members A through E because they had such nice hay-er and dreamy tattoos.

“If it was only one show,” I asked after going through the photos, “why is it you and Her Best Friend are both wearing completely different outfits in the last bunch of pictures?”

Dead silence. If it had been an episode of The Simpsons it would have made for the greatest “D’OH!” moment ever.

I entertained the possibility that she’d seen a young woman about her size in dire need of clothing on the side of the road and offered her own, then bought new ones at a rest stop. Or perhaps she’d been attacked by an oversize take-out coffee and had been forced to beat the merch girl for her outfit.

This was Step 1 in Marriage Fail For Beginners.

Ultimately I tried to make things work, doing the usual crap of blaming myself even though I was the goon that got played. A few weeks later, however, that changed when I returned from work one afternoon and found a Southern drawl message on the answering machine. Seems the bassist of Band B had a “grrate taaahhm” seeing her again on tour and would “give ‘er a holler” next time they were in the country. Clearly Idiot Wife forgot that it was my big manly voice on the machine inviting folks to leave a message after the beep. In English.

Things were a “bit” different between us after that. The details are unimportant, suffice to say the best revenge is indeed to live well.

I didn’t nor do I harbor any resentment towards the guy who was fool enough to impale the wench. When a single guy is on the road and some tart offers herself up…. if he didn’t take the offer the Ministry Of Doodness would have requested he turn in his Man Card. Sadly, I know from experience she didn’t live up to the German saying “Stupid fucks good” so it was pretty much a waste of his valuable hurry-up-and-wait pre-show time.

Folks who knew me back then will agree I’m in a much better place now, but who knows? If she’d been worth a few million bucks and we’d had kids I might have tried to make things work. I would have taken up golf, though, because I hear you can have all kinds of fun playing the game.