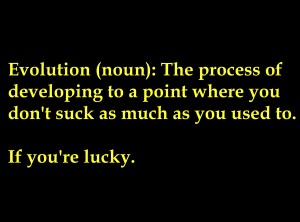 With 2009 coming to a close I found myself thinking back 20 years, trying to remember what kind of crap I was up to then and comparing it to the nonsense I’m into now. Following are a few random comparisons between past and present. Enjoy 🙂 …

1989 — “Holy crap. A real live gorgeous girl talking to me. I think I’m gonna pass out.”
2009 — “Holy crap. I have a girlfriend and friends who are girls, and they’re all gorgeous. That whole ‘sell your soul to the devil’ thing really works…”

1989 — As of December 1st I’m legally allowed to drink in the United States.
2009 — “Boy, these Americans are clever. Moose piss sold in beer bottles. We’re heading back to Toronto tomorrow, right?”

1989 — Children Of Bodom frontman Alexi Laiho is a Poison fanboy, has learned every lick on Look What The Cat Dragged In and dreams of being like guitarist C.C Deville minus the poofy blonde wigjob.
2009 — “This next song is called ‘Vai And C.C. Wish They Were Me’. GRRAAAAAAAAAAAAAHHHHHH!!”

1989 — Some longhair punk from Peterborough, Ontario calling himself Sebastian Bach turns Skid Row into a big-time act. Bach also puts the whole “permed and prissy” cock rock frontman look to death when the ‘Youth Gone Wild’ video surfaces. Europe singer Joey Tempest is pissed.
2009 — Skid Row is a joke, Bach is older (physically) and wiser (we hope), and is the unofficial Axl Rose “having a diva episode” stand-in on the Guns N’ Roses’ Chinese Democracy tour. Europe is the only band with a real career.

1989 — I officially have the biggest collection of bad-ass cassette tapes. Ever. CDs are bullshit because they’re too big to fit into the tapedeck in the car.
2009 — Cassette tapes? How much of a dinosaur do you think I am? By the way, touch my CDs and I’ll break both your hands.

1989 — YouTube: Meant as an insult but the speaker sounds like a Neanderthal. Either that or you’re in London and someone’s telling you to take the subway.
2009 — YouTube: Yes, any moron can be a star / public spectacle if they have a video camera. So, try swallowing that hamster again; we’ll get the shot from a different angle.