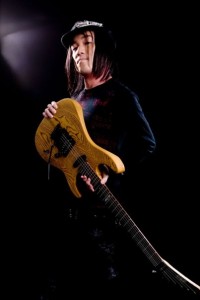 Guitarist Yoichiro Ishino has slowly but surely started to make a name for himself outside of his native Japan with Area51. The band’s forthcoming third album is due for a March 2010 release – showcasing what has become his trademark neo-classical shred gone progressive – but in the midst of songwriting Ishino found the time to assist in writing and recording the two-part Eizo Japan debut. The brainchild of countryman and Anthem vocalist Eizo Sakamoto, the project picks up where his previous band Animetal left off, continuing the metalization of popular Japanese anime theme songs. Sounds like a stretch to Western ears in terms of a concept, but Animetal’s 10 year / eight album run that ended in 2006 suggests it isn’t all that far-fetched. Ishino was aware of Animetal’s appeal going in to do Eizo Japan, making it a no-brainer, and Anthem’s continued popularity can only help to push things forward.

“There’s a decent sized fanbase for Eizo Japan since the majority of the fans are anime fans more than metal fans,” says Ishino. “The project is mainly about Eizo’s vocals, it’s not a band like Animetal was. Several guitar players play on a single album, and the arrangements are not all metal. The sound is more diverse in that sense. All the songs I work on are metal, though. Eizo had the concept of this project for many years and was always looking for the right guitar player, and after seeing me play live some years ago he decided to contact me. For me, it’s such an honor to be able to work with him. Of course, there’s a fanbase so it should have financial success but it’s also a great chance for people to get to know my guitar playing. Still, if someone like Ronnie James Dio approached you and said ‘Hey, would you like to play guitar on my album?’ the financial side wouldn’t be the first thing that pops in your mind, right? It’s the same thing.”

According to Ishino he went from being something of a hired gun to a major influence on the project as it progressed. 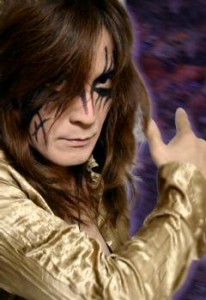 “We weren’t necessarily friends before this project, although I did know him as the legendary vocalist for Anthem, of course. For Eizo Japan 1, I did all the arrangements for the songs I was responsible for. Eizo gave initial ideas like ‘Let’s try to do this one like Extreme’ or ‘How about speed metal?’, and I would do all the detailed arrangements. For Eizo Japan 2 the demos for half the songs are made by Eizo himself, and I do all arrangements for the other half.”

The concept behind Eizo Japan will be lost on anyone who doesn’t follow Japanese anime productions, but for those that do some of Sakamoto’s and Ishino’s interpretations of the music may come as a shock. Taking them strictly as metal albums – particularly Eizo Japan 2 – the music comes across as dark Stratovarius-inspired shred.

”It really depends on the song,” Ishino says of the arrangements. “Some are completely different compared to the original version, and some are just arranged slightly metal. The approach for each song really comes from Eizo’s ideas.”

“We’d like to reach as many listeners as possible since we’re really putting lots of effort into the project,” he adds. “Eizo Japan 1 was really a trial and error album in terms of direction and processes, so maybe the appeal is limited. On the other hand there are more albums planned to come, so hopefully we’ll be able to infiltrate new listeners.”

At press time Ishino was quite literally in the middle of recording Area51’s third album. Two songs – ‘Sincerity’ and ‘Marionette’ – were released via iTunes at the end of 2009, giving the proceedings an initial boost. Blame it on Ishino’s enthusiasm and belief in the new material.

”Our next album will be released next March, which has been confirmed. We’re also looking around for an overseas deal. The new album will be extremely powerful. We’ve 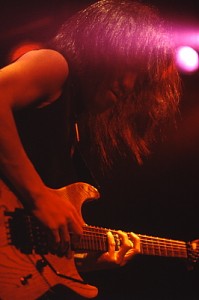 asked Jens Bogren to do the mixing, since this third album has to outperform everything we’ve done in the first two albums. Jens has worked with bands like Opeth, Paradise Lost, and Symphony X. Some songs have already been mixed and they sound so great, we’re very excited about the outcome.”

For the time being Area51 features Ishino and vocalist Kate Cain backed by session musicians for studio work. Whether or not Ishino will try and assemble a full time line-up remains to be seen.

“Also, in terms of the band line-up, it’s only Kate and I for the time being,” says Ishino. “We’re very fortunate, though, to have great relationships with a drummer and bass player who we really trust. They have other activities and bands they belong to so they aren’t official members, but we will be playing together, which works out well.”

“I think we’re evolving as a band,” he continues, referring primarily to his songwriting. “There are certain things we’ve changed in terms of sound, but not so much that our fans would be disappointed. Our fundamental approach has always been ‘melodic and catchy’ plus ‘technical and structured’ which hasn’t changed at all. Lately I’ve been listening to lot of Kamelot and Masterplan, so maybe that’s adding something new to my original influences like Stratovarius and Yngwie Malmsteen.”

Watch for an exclusive interview with Eizo Sakamoto, coming soon. The official Eizo Japan website is available here. For audio samples go to this location. 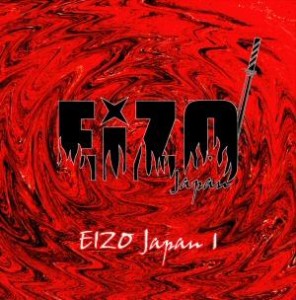 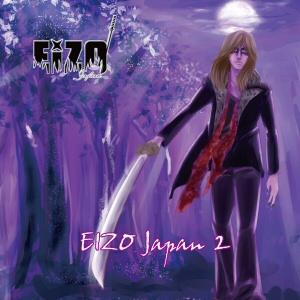 One thought on “AREA51 – Intended Animation”