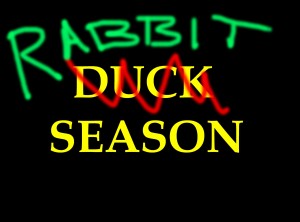 Two words combined that are enough to make my brain itch uncomfortably, like poison ivy on one’s naughty bits. It feels like there’s a bug walking around between the inside of my scalp and my skull; it shouldn’t be in there but I can’t get it the fuck out.

Folks old enough to remember cassette tapes as a form of audio entertainment will recall the Jive Bunny phenomenon. The actual name was Jive Bunny And The Mastermixers, a moniker worn by a glorified mash-up project in 1989 spearheaded by a medley entitled ‘Swing The Mood’. It featured instantly recognizable ’60s tunes smooshed up against and mated with Glenn Miller’s classic ‘In The Mood’, all remixed, spliced and remixed again into dance-able tracks of varying length. Not quite techno; just classic melodies poked and fluffed into swing-ish updatedness so as to draw anyone with too much booze in their system onto the dancefloor.

Perhaps you see where this is going…

Jive Bunny was a mind-boggling (at least from where I stand) international success, selling gazillions of copies in spite of the fact it was really only one long-ass cover song barfed back up into various lengths and / or track sequences. Eight tracks, but only one sicko ad-nausea vibe. See Wikipedia for a brief overview here if you must, but take my word for it, it was painful back then and it remains an agonizing exercise. There’s even a frickin’ official website some place, and people actually review the damn thing on Amazon.com to this very day.

At the time of the Jive Bunny Smackdown, I was going out with a girl who has since been filed away to memory as Glue In The Eye (if you want the why of the name let me know; it’s an adventure unto itself). She liked to party, as did the entire clique consisting of the two of us, her best friend, and the assorted hangers-on that came with said friendship. Best Friend’s father hailed from Gander, Newfoundland and had a decent gig outside his day job fronting a country / folk band that would play various country bars around Toronto on weekends. Although I took great joy back in those days in taking the piss out of anything that wasn’t metal – I wasn’t nearly as open-minded or as well behaved as I am now – I found his shows to be quite entertaining. He was a talented singer and guitarist, played the squeezebox (an accordion for us non-Newfie types), and had a killer band that could seemingly play anything. His sets of done-to-death traditional Scottish / Irish / Newfoundlander folk were killer, and his country selections were better than tolerable because he sang without the damn country twang and didn’t punctuate his sentences with “Y’all” and “Y’hear.” The gentleman knew how to throw a party, thus I didn’t bitch when Glue suggested we check out Cyril’s show. Live music and beer… no way you could go wrong with that.

Until he played the Country Nugget.

There was nothing wrong with the club itself, or the people that frequented it. Far from it. It was a fun place to hang out, particularly since Best Friend’s boyfriend was also a metalhead. I witnessed line dancing for the first time in my life at the Nugget – and laughed hysterically… repeatedly – and I saw grown men wearing 10 gallon hats, cowboy boots and string ties. As an ensemble, in public. Willingly. In the burbs of Scarborough. Yes indeed, I had discovered where Alice’s rabbit hole really went…

The between-set music was somewhat less impressive given my personal taste for everything from Mötley Crüe to Helloween to Slayer. But, in the interest of Glue’s continued interest in my fumbling hands and assorted dirty behaviour I gritted my teeth and endured Garth Brooks, Travis Tritt, Reba McEntyre, Dolly Parton. Basically anything the Country Chorus Line dancers could throw down a Thunderfoot or a dosey-doe at within the confines of their stiff-as-a-corpse “dance” routine. I’m fairly certain I heard just about every country hit put to tape in the ’80s. The pitchers of beer made it easier, as did the welcome infusions of Johnny Cash.

The problems began when Cyril finished his set, usually about an hour before last call, for that was when The Bunny was unleashed. The in-house DJ would invariably dig into his waning collection of music and reach for the Jive Bunny CD; a surefire way to get the half-smashed hotties still sitting upright bouncing and flouncing on the dancefloor for the next 50-some-odd minutes. Several of the doods would be out there as well, of course, as the shots of Jim Beam and B52s had migrated to their feet. It was like being inside a redneck rave, only someone forgot the Ecstasy to help me take the edge off…

The worst part was, every time the invitation to go to the Country Nugget to see the show would come I’d be on board. Yes indeed, the suggestion of kinda possibly maybe getting some tail at the end of the night was enough to convince me I could handle The Bunny. For the record, it wasn’t worth the punishment.

There were times, of course, when in the midst of one of her Bunny Dance-A-Thons with Best Friend, Glue would get it in her head that I should dance with them. I refused as any real man would (and should), insisting my beer was best consumed cold and, oh look, the waitress with the ass that won’t quit just brought another round. Glue would then dismiss me with an exasperated “What-everrr…” look and race back to the dancefloor to Bunnify herself some more, returning 10 minutes later to ask me again, about the time track 2 or 3 or 4 kicked in. It was a laughable routine, one that I swore each time I would never go through again, only to be back at it a month later.

Alas, following the 50 Minute Hare-Brained Workout the DJ would cool things down with his Go The Fuck Home set of slow songs. Glue would demand that I dance with her. I conceded defeat, obedient boyfriend that I was, not realizing that very first time she was rhythm deaf. The girl bopped and bounced to a medley of crap for an hour at a time but slow-dancing with her was like trying to hold onto a bag of freshly caught eels. I didn’t get it. So, from that point I watched her every time she hit the floor for The Bunny and discovered, Christ in Hell, my girlfriend was a spaz. She was a go-go dancer nightmare. It was hard not to comment on it to the people in my vicinity when I was in my cups, and there were plenty of cups on these particular nights…

Suffice to say, I shouldn’t have been surprised when things didn’t go my way at the end of the night. Pity, because those were the only times she had rhythm.

The relationship ended badly, and although I can’t recall the details I’m sure that final blowout included a reference to her quasimodo dance moves. Cheap shot, but truthful. I’m absolutely sure, however, that I equated her love of Jive Bunny with being clinically insane.

Looking at Amazon.com’s review section, I see she wasn’t alone.