Note: This is not a new blog. I wrote it back in 2007 in a fit of inspiration and posted in on MySpace, where I believe it was read by a total of 2.5 people. I’ve chosen to re-publish it more or less as it was because it’s a story that still makes me shake my head in disbelief. As in, this actually happened to me?! I’ve also had some people ask about the oddball Glue In The Eye that appears in my recent blog Your Boyfriend Don’t Dance, You Can’t Rock N’ Roll. Well, this is how and why the moniker came to be. Enjoy! 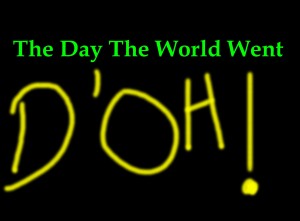 When I was about 20 or 21 and still living in Toronto I had a girlfriend a year younger than me who worked at a kids’ shoe store. She was rather pretty, her two most endearing qualities were located at chest level, and although she wasn’t the sharpest tool in the shed there’s no question she had at least inherited all the brain cells alotted to the family gene pool. She also had a problem with her left eye that required her to take special steroid-laced eyedrops whenever it began to hurt. It was a condition that manifested itself about a year into our relationship which, now that I think about it, could well have been an allergic reaction to yours truly.

In any case, we’d been going out for a couple years and our relationship eventually hit the Girls Night Out phase. Translated: she wanted to go out unaccompanied and get plastered with her airhead friends Dipsy, Lala and Po because she was getting rather sick of me and wanted to find someone new before serving my walking papers. And, of course, there’s no better night to get picked up in Toronto if you’re female and stacked than Thursday night, otherwise known as Booty Night by anyone between the ages of 18 and married. Thus she and her gaggle of geese headed out to a well known testosterone / estrogen meat market on Kennedy Rd. in Scarborough on a particularly warm summer night, leaving me to stew in my own juices wondering just how fucked up she was going to be by the end of the night and by whom.

I don’t remember exactly what I ended up doing in lieu of sitting around and being bored out of my skull watching America’s Funniest Home Videos, but I was most certainly at home because around 10:00pm I received a frantic phone call from her idiot friends saying I should come and pick her up. I asked what was wrong but they refused to say, so near as I could figure it my lovely girlfriend had gone apeshit with the B52s and passed out in a pool of her own vomit. There was a certain amount of satisfaction in that thought, I admit. When I arrived at the bar, however, I was presented with a much different scenario. There she was, the love of my life, sitting quietly in a booth holding a wet paper towel to her left eye with her friends gathered around the table looking uncomfortably sober. People at the neighbouring tables were likewise subdued. There was no vomit to be seen anywhere.

It turned out my darling girlfriend’s eye had started to hurt mid-bender, and she quite naturally decided to solve the problem by using her eyedrops. Only thing was, when she reached into her purse she grabbed a small bottle of industrial strength crazy glue instead of her regular medicine; the kind of glue they use in the TV commercials to stick elephants to the ceiling. Y’see, she used the glue at work for repairing shoes when the regular customers came by looking for a tune-up. Like her eyedrops, the glue came out as a clear liquid rather than a gel, and she realized something was wrong almost immediately, but not before her eyelids were sealed shut. Panic ensued followed by a run to the bathroom, where she succeeded in tearing out most of her eyelashes trying to get her eye open. Supposedly another girl in the bathroom at the time saw this little drama and ended up puking her guts out as a result.

My first thought was You’ve gotta be fucking kidding me, followed by How could anyone be so stupid? I freely admit to not feeling the least bit sorry for her. All I could think of was the level of stupidity a person had to attain in order to pull off a stunt like this. I mean, if you use eyedrops regularly, you sure as hell don’t keep a bottle almost the exact same size and shape of industrial shoe glue in your purse. Sure as hell not when you’re out drinking in the interest of going home a stumbling, babbling, cackling mess . And you sure as bloody hell don’t drip the drops into your head without making sure you’ve grabbed the right ones beforehand.

Her night ended with a trip to the Emergency room followed by a two hour saline drip onto her left eye, which eventually enabled the doctor to pry her eyelids apart. I, of course, was the one who had to relate the series of events to the woman behind the Emergency desk, who I imagine had a hard time keeping a straight face. She succeeded admirably. I felt like a moron; “Yep, that’s my girl, uh-huh…” When the woman handed me the required forms to fill out, I was tempted to ask my girlfriend if she wanted to read through it once I’d finished to make sure I’d gotten things right.

When all was said and done, the only thing damaged was her pride. And up until the end of our relationship I never heard a peep about the necessity of a Girls Night Out ever again.