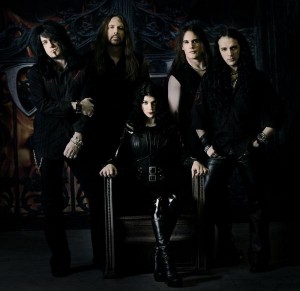 From the moment word got out in 2005 that Manowar bassist / co-founder Joey DeMaio was working with a new female-fronted act called HolyHell it was understood that the band was his new project. Particularly since the band was a power metal outfit signed to DeMaio’s then-new label, Magic Circle Music. The fact that HolyHell toured extensively with Manowar right up to early 2010 only served to add fuel to the fire. Vocalist Maria Breon gives credit where it’s due and freely admits that DeMaio did have a hand in forming the band, but she isn’t shy about letting people know HolyHell wouldn’t exist without her. It also wouldn’t work nearly as well as it does without Joe Stump (guitars / Reign Of Terror), Francisco Palomo (keyboards), Jay Rigney (bass) and Rhino (drums / ex-Manowar) as part of the line-up. So it goes that as much as HolyHell enjoy the attention they’ve gotten, they’re moving forward and and slowly but surely getting out from under Manowar’s shadow.

Breon: “This whole stigma that we’re a Manowar product, it’s absolutely not true. I set out as an aspiring vocalist who had studied and I wanted to put a band together, but I didn’t have any experience. I’d spent most of my time in school learning the proper ways to sing, performance and soforth, and I got very aggravated because I wasn’t able to express myself and do what I wanted to do… which was put a band together. I really wanted to learn from somebody that was successful in that regards, and by chance I met Joey DeMaio at a studio in Cleveland. I think he mixing the Hell On Stage live album – that was ’98 or ’99 – he listened to a demo tape of mine, and we just went forward from there. HolyHell went through a developmental phase where it’s always my ideas and my vision, and Joey really came into the picture as a big help by having so many connections to bring artists like Joe and Francisco into the picture.”

“I had a vision for a band, the name, everything, but it was a long process putting it together because there were a lot of prospects in terms of songwriters and musicians, and in the beginning I wasn’t that confident in songwriting. I didn’t want to hold up the process so I was open to accepting different songwriters and musicians, and nothing fit. Just by chance Joe Stump was on the label, and he was perfect for the band. There were many guitar players that were considered but none of them were a perfect fit until Joe turned up.” 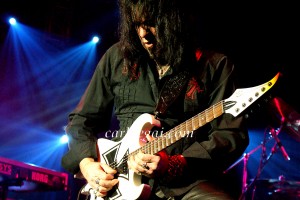 Stump: “It started out with some outside writers that Joey had even before I was in the band. Joey had people contributing different tracks and finally the thing go to the point where he contacted me and told me he had this project with a female singer. Would I be interested in working with them? I said yes and from there we started to do some writing, but we still had some outside writers. It was less organic and less of our own thing. Slowly but surely, though, we got the band line-up solidified.”

Asked if the members of HolyHell feel they have to justify their existence in light of the fact they’ve been a staple on Manowar’s last few festival tours through Europe, both Breon and Stump dismiss the suggestion as garbage.

Breon: “Absolutely not. As I said, this is a vision that I had and I’ve been able to watch it come to life from the beginning. It certainly wasn’t Joey’s vision or somebody else that moulded me. I definitely pride myself on the fact that I was open to bring people that are really good at what they do and provide a vehicle for my vision. HolyHell is not my band, it’s our band. We have a chemistry and it definitely speaks very loudly. Most importantly, even though the affiliation with Manowar is so close you can see the songwriting has fallen more into our hands because I’ve developed more confidence and worked on writing lyrics. I felt as I was able to bring the record forward.”

Stump: “There were some outside writers when the EP (Apocalypse from 2007) came out, but three quarters of the latest record (self-titled, issued in 2009) was written by us. Francisco wrote most of the tunes, I added a few tracks, and Maria did all the lyrics and melody lines.”

Smart money is on HolyHell moving out and away from DeMaio and the Manowar camp when they get around to writing and recording their next records if they want to be taken seriously.

Breon: “We’ve started working on the new record, and there already is that distance. A lot of the songs that weren’t written by the band existed before HolyHell existed. We do them because I’m sentimental and I wanted to include material that contributed to the growth of this band from the start to where it’s at now. We went out and played live in the US without having a record. Other than the festivals we did last year, this is actually the first tour we’ve done for this record 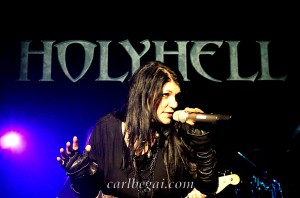 (Death To Infidels Tour 2010), so everybody’s got that preconceived notion of the band based on what they remember from 2007. We’re a stand-up old school rock band that writes and works together, so people that think we’re part of some kind of corporate assembly are uninformed. If you see us play live you’ll know we’ve been together a long time and written tunes together rather than a bunch of superstar players that have been thrown together.”

Stump: “Live we’re much less restrained. Joey produced the record and he has an insane amount of knowledge – he’s one of the forefathers of power metal, of course – so he helped guide HolyHell, but now the thing has taken on a life of its own. There will be differences on the next record; not in the direction of the band, but as you’ve seen it’s become a balls-out thing.”

HolyHell aren’t against throwing the audience a curve or two either. Case in point on the eve of this interview, which featured a cover of Pat Benatar’s ‘Heartbreaker’ concluding their set.

Stump: “Well, it was a lot more rock compared to the original (laughs). We like doing stuff like that, because it’s not very often you can be in Germany supporting Manowar and get away with playing Pat Benatar…”

Breon: “…without getting lynched…”

Stump: “A couple of the merch guys are diehard Manowar fans and hardcore metalheads, and they’re like ‘That Pat Benatar tune! Yeah baby!’ (laughs).” 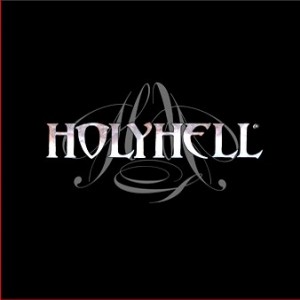 For more information on HolyHell and to purchase their albums go to their official website here.