Toronto rockers Danko Jones have been a buzz band for years. Europe caught on long before Canada and the United States, turning them into an annual staple on the metal festival of your choice sandwiched with some of metal’s finest. A support tour with Motörhead and Saxon in 2008 gave them a foothold in the UK, not to mention serious credibility amongst the old metal guard. Up until now Canada and the US have devoted half an eye to the band beyond the diehard fans that have been following them for a decade, but 2010 may well be the year things change for the better. It began with a coveted opening slot on the Canadian leg of Guns N’ Roses Chinese Democracy tour alongside countryman Sebastian Bach (ex-Skid Row) followed by a support tour with Clutch and select headline shows in the US. Add to this a brisk-selling Canadian headline tour announced prior to the official May release of new album Below The Belt and the rock trio seem to finally be on their way to getting the credit they deserve at home.

Vocalist / guitarist / namesake Danko Jones doesn’t dwell on the “have” versus “have not” aspects of success as defined by the industry. The band is able to make records and get out and tour regularly, which is good enough for him.

“We were never one of those bands that went gold. The internet kind of collapsed that whole system so we’ve gotten by on our wits trying to keep this band going. When all the bands that were selling gold and platinum records realized they weren’t able to do that anymore they had to figure out other ways. Ringtones and crap like that. Playing live and touring is what sustained this band and the albums are what keep the tours going. It’s not like were doing a million units sold, where we can come home to a big bucket of money. We’ve never had that so I’ve never really complained about illegal downloading because, to be honest, it’s never really affected me. We were going copper before everyone started downloading (laughs). We’ll probably sell more albums now because thanks to the internet our name is getting around.”

“Growing up in Toronto and going to shows, my biggest goal was to play the Concert Hall because that where all the shows I went to were. That level of band to me was ‘You made it!’ If you could get on a tour and be the first of three bands on a night, you were in. I remember seeing Testament, Savatage and Nuclear Assault there; Nuclear Assault were first up and for me it was like ‘Aw man, they made it!’ So sometimes when we get on those tours where we’re first of three I have to remind myself that that’s what I wanted (laughs).” 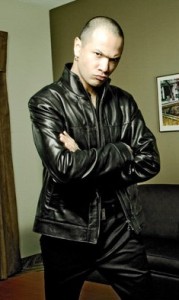 The Guns N’ Roses tour was an experience Jones and his bandmates would gladly repeat at the drop of a hat, largely due to the fact that the master of ceremonies Axl Rose isn’t the psychotic 8-year-old so many media outlets have made him out to be.

“Axl Rose has got a bad reputation but he treated us really well,” Jones reveals. “He was nice to me and we hung out for hours. He had his own thing going on, but I personally think a lot of that has to do with the fact that even though Chinese Democracy is almost two years old the band has only really started touring on it. The Canadian tour that we were on was actually only the second leg after four dates in Asia, so I think Axl was trying to get his grounding back. But honestly, of any of the big tours that we’ve been on, Axl Rose was one of the most accommodating, nicest guy´s I’ve ever toured with. It’ll strike people as odd for some people to hear that but it’s the truth. He’s a really nice guy and it’s too bad not enough people see that side of him.”

“I know people are going to read this and say ‘Ah, Danko’s kissing Axl’s ass…’ but I’m being totally honest. I’ve never hung out with the main headlining band on any tour for three hours on a few nights, but that happened with Axl. He’d have people come into dressing room after the show, he was cool with it. There was nothing where security would pull this ‘Don’t look him in they eye!’ or ‘Okay, now you can shake his hand!’ crap. It was never like that, it was really relaxed. I was surprised because I’m like everyone else and I had this perception. Now that the tour is over I’m bummed (laughs). I’d open for Guns N’ Roses for a whole year if I could, I wouldn’t mind. That was the most fun we’ve had in a while.”

Jones was able to tour on the strength of the B-Sides album issued in February 2009, an overdue treat for the fans showcasing rare and unreleased archive material dating back to the band’s humble beginnings. Begging the question as to whether any of that old material was used on Below The Belt after getting re-acquainted with it.

“For Never Too Loud there were a couple riffs from old songs that we used, but for this one… no” says Jones. “A lot of Below The Belt was written from scratch. We wanted to make this album a little heavier. Never Too Loud was kind of our ode to classic rock; it had that kind of feel. We worked producer Nick Rasculinecz and we were all on the same page in making it a real rock record as opposed to our older records, which have a punk rock or a metal feel. We just wanted to rock (laughs). I don’t think some people got the references, which is a little disappointing, but at the same time we missed playing hard and heavy and fast as well. So, with this new album we started from scratch and decided to write a whole bunch of songs the way we used to do it. Real fast, don’t think about it too much, and just fucking churn it out. We had Matt (DeMatteo) produce it again. He’s moved to Montreal from Toronto but he actually came down to do it, so it was really kind of like old times again.” 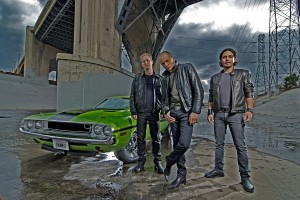 “There was really no time to fool around. We weren’t sitting around going ‘Oh, does this sound okay? Let’s try that sound.’ We just said ‘This is the way we do it, clock’s ticking, let’s lay it down.’ We didn’t have time to think about the million different ways of doing it, and we’re all used to that from the past because of tour obligations and, bottom line, money (laughs). We couldn’t book nine months in the studio. With Never Too Loud there were a lot of things like ‘We’re off the road, we need a break.’ We wanted to see what would happen if we took all that time off and wrote an album, and with Below The Belt we realize that we work best under pressure.”

Below The Belt is the album fans were expecting as the follow-up to 2008’s Sleep Is The Enemy. Call it a bare bones Ramones meets KISS attitude adjustment from Never Too Loud’s rock anthem approach

“I love Nick,” Jones says of Rasculinecz, “and his portfolio speaks for itself, but when I went back and listened to Never Too Loud I felt that some of the songs were really over-produced for us. If people were to hear the demos for Never Too Loud I think they would consider them something closer to what they were expecting as a follow-up to Sleep Is The Enemy. Those demos are really raw. There are some songs on Never Too Loud that I’m a disappointed in. If it had been produced the way I’d heard it in my head – the way I was used to – it would have been that continuation.”

Back in familiar territory Jones doesn’t disappoint. Below The Belt is a rundown of four chord up-tempo songs about girls and women, love and the lack of it, or how cool he is and how awesome you’re not. Asked if he’s accused of locking himself into a comfort zone instead of taking risks – an argument sure to catch fire yet again with the new record – Danko says he wouldn’t have it any other way.

“Yeah, I get it, and I hope that Lemmy and Angus Young get it because they do the same fucking thing (laughs). That’s a group of artists and bands that I would be flattered to be included in. The bands that churn out basically the same record year after year; if you like the last one and you like the new one you’ll like the next one. And you’ll always want to hear the new one because you want to hear the new take on that sound.”

“I’m never going to try and sound like Joey Ramone no matter how much the music itself is reminiscent of The Ramones,” Jones laughs. “I really dislike bands immediately when they don’t disclose their influences and stuff. I get a better appreciation for an album when bands do that.” 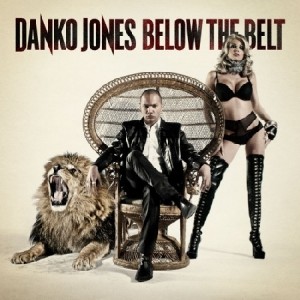 Go to this location to purchase Below The Belt. Click here for Danko discussing his experience touring with ex-Skid Row vocalist Sebastian Bach on the Guns N’ Roses road trip through Canada.