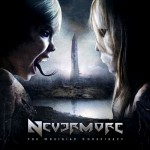 An undeniably unique killing machine in the world of metal, Nevermore were on a collision course with themselves since the birth of The Politics Of Ecstasy back in 1996. Always a little bit heavier and touch more progressive with each album that followed, the band went over-the-top in 2006 with This Godless Endeavour, an album so overpowering in spots it was a chore trying to keep up with the wash of sound. That said, just how well The Obsidian Conspiracy fares depends on whether the diehards that claim heavier is always better can get past the fact the band has gone back to writing songs circa Dead Heart In A Dead World and the Politics record. Yes indeed, Nevermore have actually eased up on the group bludgeoning to allow their individual and collective performances shine rather than overwhelm people with the cold hard fact they do mayhem better than most chaos-buzzed black metal bands.

The less-is-more approach on The Obsidian Conspiracy makes for sparse arrangements that allow the songs to breathe. Guitarist Jeff Loomis and drummer Van Williams serve up their trademark shred, but for the first time in a long time the listener is able to catch everything going on. Vocalist Warrel Dane, meanwhile, goes for intensity rather that all-out-vicious, singing up a storm even when things slow down to a doom-laden trickle. First three tracks in – ‘The Termination Proclamation’, ‘Your Poison Throne’, ‘Moonrise (Through Mirrors Of Death)’ – bring back 1996 in a big way with their up-tempo and uncomplicated mountains of crunch backing Dane’s ever brilliant vocal melodies (some of the strongest he’s written in years). ‘Without Morals’ is an echo of Dead Heart’s ‘Narcosynthesis’, and ‘The Blue Marble And The New Soul’ has me thinking Nevermore would do well covering Alice Cooper’s ‘Steven’ thanks to Dane’s melody lines and the songs brooding atmosphere. Given the album’s direction, however, it comes as no surprise to hear a couple tracks reminiscent of Dane’s solo album from 2008, Praises To The War Machine. Both ‘The Day You Built Your Wall’ and ‘Emptiness Unobstructed’ sound like they were lifted from those recording sessions and given a Loomis tweak to make them feel more at home. How well they fly depends on how much one loved or loathed the solo record, but there’s no question the songs work well in spite of not exactly being in Nevermore character.

The album closes with ‘The Obsidian Conspiracy’ featuring Loomis at full shred both riff and solo-wise; the fastest and heaviest song on the album that, remarkably, runs a close second to the helter skelter prog weirdness of ‘And The Maiden Spoke’. For all the talk of keeping things simple on The Obsidian Conspiracy, Nevermore – Williams in particular – pulls out all the stops on ‘And The Maiden Spoke’ for five minutes of sonic lunacy. Absolutely brilliant, and something that wouldn’t have worked nearly as well stacked up against nine other tracks cut from the same cloth.

Fave tracks: ‘The Termination Proclamation’, ‘Your Poison Throne’, ‘And The Maiden Spoke’, ‘The Blue Marble And The New Soul’, ‘Without Morals’, ‘The Obsidian Conspiracy’

One thought on “NEVERMORE – The Obsidian Conspiracy (Century Media)”