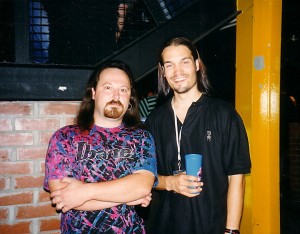 That isn’t to say that all bands out of the goth realm suck – and Jeez help me, there are some knockout women to be drooled over – but very few have bent my ear for more than a spin over the last several years. Image, it seems, takes precedence over substance. Very sad indeed, especially in light of the fact that the band who gave goth metal life beyond the underground have decided to call it quits.

Word recently came down that after 17 years of ups and downs Theatre Of Tragedy have decided to close up shop and move on. I was saddened by the news, particularly since they recently released their best album in over a decade, and I was shocked to realize they’ve been a part of my life for 14 years. They’re one of those bands I’ve constantly returned to even though they exist outside my usual sphere of hell and mayhem served up by the likes of Children Of Bodom, Judas Priest, Death Angel, Loudness or Nevermore. Looking back now, Theatre Of Tragedy was an important building block in my musical life. One of the bands that forced me to keep an open mind and explore new music rather than degenerating into that popular “Metal! Metal! Die! Die!” pose so many numbwits take when faced with something other than what they’re used to.

I discovered Theatre Of Tragedy in 1996, several months after moving from Toronto to Germany. The aptly named Out Of The Dark Festival tour was blowing through town and I decided to attend in the interest of seeing and interviewing Moonspell, and checking out a little band from Greece called Rotting Christ that had just started to twist my brain (there was also something wonderfully obscene and depraved about a band called Rotting Christ playing in overly uppity religious southern Germany). Sandwiched in the middle of the five band bill was some band from Norway, being hyped to the rafters at the time by the European metal press as the lords of melancholic brooding, black eyeliner and frilly sleeves. Admittedly, it did take me a while to figure out what the metalhead locals meant with their incessant yapping about something called Seeayter Uff Tratchitty.

My interest in the band was zero on the day of the show. I’d filed away the Norwegian troupe as a bar band, meaning I’d spend their set at the bar with my back to the stage to look for runaway cleavage while they wasted everyone’s time. The lights went down and the room erupted in squeals of orgasmic delight from the black-on-pale diehards, and my curiosity was piqued in a deer-in-the-headlights kinda way. As in How much can it hurt, really? Then the singing began… 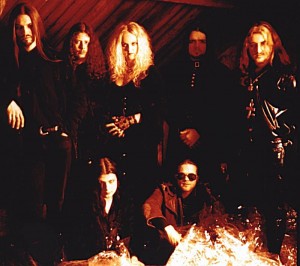 I’d never heard anything like it. Female soprano vocals bookending death metal growls backed by heavy, brooding doom. Pure atmosphere, and I was sucked in completely. It helped that the female singer was easy on the eyes, but the overall performance left me stunned. Rotting Christ had been solid, but this was intense. From disinterested to fanboy in 40 minutes. I bought both of their albums the next day based solely on that show. Never regretted it for a moment.

It’s also worth noting that I wore a shirt screaming with colour to a show populated by evil goth minions standing shoulder to shoulder in their vampire garb and survived.

In the years that followed I attended any shows I was able to get to, and not even the Worst Hangover In The History Of The Universe could keep me away (a blog for another day). Interviewed them when I could – even under the influence of said hangover – and found worth in each album they released even when I questioned their musical direction.

I was surprised by vocalist Raymond Rohonyi dumping his growling vocals for Aegis, the album following their Velvet Darkness They Fear breakthrough. Wasn’t too impressed with the electronic aspects of the Musique and Assembly records, although Musique is actually quite a solid listen all these years later. News that they’d booted vocalist Liv Kristine left me as gobsmacked as every other Theatre Of Tragedy fan. And their return to the goth / doom metal sound that made them famous was music to my ears.

I was fortunate enough to develop a rapport with the Theatre Of Tragedy camp over the years, pretty much from our first official meeting in 1997. Liv granted me an exclusive interview shortly after news broke in 2003 about her being fired from ToT and forming a new band, Leaves’ Eyes. This in turn led to me getting to know her sister Carmen, guitarist Christian Hector and their band Midnattsol. Osmosis is a wonderful thing.

Additionally, every time I hear Liv’s voice I’m reminded of the last time I saw my dear friend Raymond “Black Metal” Wallace, who passed away in November 2007. Only three months earlier we – Ray, The Rev and myself – attended the Kamelot / Leaves’ Eyes show in Toronto at the Opera House. It’s a night I’ll never forget, even when my memory start to fade along with my hairline, thanks to the music.

On the other side, Theatre Of Tragedy drummer Hein Frode Hansen has kindly put up with my interview requests and questions for years. In 2006 he welcomed me to the frozen hell that was their ‘Storm’ video shoot inside Hitler’s Coliseum in Nuremberg, where I realized that no matter how well Canadians handle the cold the Norwegians beat us blind. Particularly vocalist Nell Sigland, who went bare-shouldered in -5 Celsius for 11 hours. It was an experience to say the least, although I think my memories are probably warmer than the band’s. 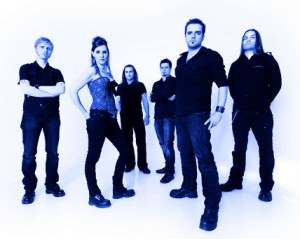 An era has come to an end, but there’s no question in my mind Theatre Of Tragedy made the metal world an interesting and ultimately better place. They inadvertently launched an entire genre of music, they made it possible for the meanest black metal souls on the planet to add female operatic vocals to their music and not get crucified (at least not as often as expected), and according to Nightwish founder Tuomas Holopainen his band likely wouldn’t exist without the Theatre’s influence.

Listening to the band’s latest – and last – album Forever Is The World, I can’t help but be a little bummed. Easily their best record since Aegis, it embodies everything about Theatre Of Tragedy that made me want to listen to them in the first place… right down the return of Rohonyi’s growls. Then I consider their decision to go out on a high note, guaranteeing that Theatre Of Tragedy will be celebrated for their accomplishments and not remembered for half measures. A smart move that deserves respect.

Ladies and gentlemen, it’s been a pleasure… or as close to pleasure that well orchestrated doom and gloom can give a person 😉 . Thank you and good night.

Links to a few of my interviews that were published online via BW&BK:

Check out the official Theatre Of Tragedy website here.