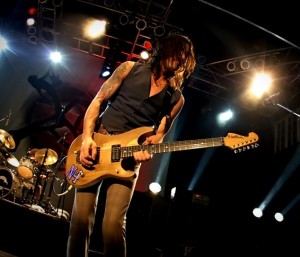 “That was one of those unexpected little things that happens,” Bettencourt says. “A friend of mine, Tony Bruno, called me up when Extreme was off the road and he told me that if I wasn’t doing anything, Rihanna was looking for a guitarist. He told me that before I said no – and I guess he figured I would because there isn’t really a lot of guitar in her songs – the idea was that she wanted to make the live show a bit heavier because she’s into bands like Linkin Park and stuff like that. She wanted somebody to make things rock a little bit, which meant that I would basically get to do what I do if I took the job. I thought it was really interesting to be able to play my style of guitar over her stuff, I thought it would be fun, so I went for it.”

“It’s cool. I wouldn’t have been interested if I wasn’t able to be myself, and it’s a challenge because the set is 24 or 25 songs that requires a different sort of guitar playing to pull it off. At one point I’m playing pop stuff and making it a bit heavier, there’s some funk and R & B, some ballads, some piano stuff, even some Hispanic flamenco, so it keeps things interesting. It certainly feels more at home than I thought it would.”

Asked if there are any songs in Rihanna’s set that he’s been able to put his own stamp on, Bettencourt reveals the show does indeed have some distinctive Nuno moments.

“That’s a good question. There’s a song called ‘Let Me’ that we basically get to really rip out on, get the funk out so to speak. It’s very different from her album version, very cool to play live. There’s another one, ‘S.O.S.’, which was one of her earliest singles, and we do a really different version that’s really heavy live. It’s a great song to play.”

“I’m sure there are a lot of Extreme fans wondering why the hell I’m playing with Rihanna,” he adds, “and the truth is that to any of the fans that really dig what I do, it should make complete sense. With Extreme I was looking for something different, something eclectic, so for me playing with Rihanna just broadens everything for me. It’s a little bit of a vacation from what I normally do. It’s nice to be able to do a run where I don’t sing, and I get to play somebody else’s stuff while adding my own interpretation. It keeps things fun and interesting. I don’t want to do it forever (laughs), but for now it’s really cool, a good time.” 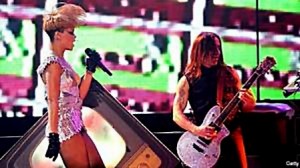