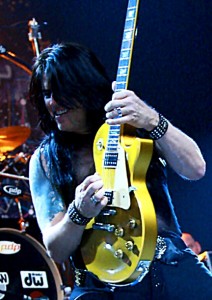 Folks that visit this corner of the blogosphere are aware that I recently did an exclusive interview with new Crimson Glory vocalist Todd La Torre (found here). On the same day I interviewed the band’s founding guitarist, Jon Drenning, to discuss the events leading up to La Torre’s induction into the band. We also talked about Crimson Glory’s forthcoming studio album, which is due to be conceptual piece in tribute to former vocalist Midnight.

“I was shocked, yeah,” Drenning says of the similarities between La Torre’s and Midnight’s vocals. “It came as a complete surprise because we were preparing for the ProgPower X tribute show to Midnight, organizing these metal singers from around the world who had graciously offered their time and talent, so we really didn’t need another singer. Matt Laporte from Jon Oliva’s Pain dedicated his time as well to play guitar and dulcimer on the night because he and Midnight had been good friends, and he mentioned to me that he knew a drummer who was an aspiring singer. He said ‘I think he might be your guy.’ I told Matt there was no way. There were people from all over the world interested in auditioning, there was no way I was going to find a singer for Crimson Glory in my own backyard. Finding one Midnight was special enough. Finding another singer with those qualities in my own backyard again… what are the chances of that?”

“I blew it off and decided I wasn’t going to waste my time but Matt kept pushing me to check Todd out. Wade Black and my wife Danae were helping the band rehearse, but Wade wasn’t able to make rehearsals one night so I told Matt to call his guy. He did, but Todd didn’t know any of our music. He’d heard of Crimson Glory but he didn’t know the songs, had never heard one of our albums, and had no idea who I was. He downloaded a couple songs and learned them in the car driving over, so when he showed up he knew the songs half way, but he did a great job. Todd came in, this scrawny guy no bigger than Midnight, but he sounded great. Even more important, though, was he had a similar emotional quality to his voice that Midnight had. I was looking at the other guys in the band wondering if they were hearing what I was hearing.”

“We did ‘Queen Of The Masquerade’ and ‘Azrael’, and he really got the attitude and the high notes. Todd was nervous but it sounded great. I asked him to learn a few more songs and come back the next night. That second night we did ‘Valhalla’, ‘In Dark Places’, ‘Masque Of The Red Death’, ‘Mayday’, and we were blown away.” 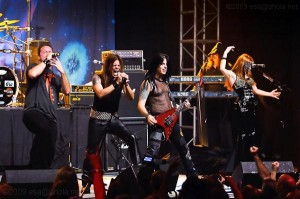