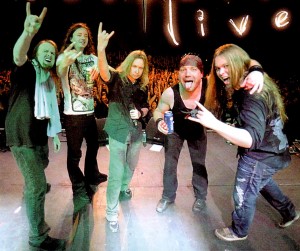 Earlier this year Stratovarius issued what has been viewed as a cash grab. Dubbed a Special Live Edition of the band’s 2009 comeback album, Polaris, it features new packaging and a 14 song live “bootleg” bonus disc featuring recordings from their recent world tour, but it isn’t the half-hearted hackjob so many of these productions tend to be. Along with some of Stratovarius’ most popular songs – ‘Hunting High And Low’, ‘Kiss Of Judas’ ‘Father Time’ and ‘Speed Of Light’ – the package includes four tracks from Polaris and some unexpected gems from their catalogue, clocking in at a high quality press-repeat 75 minutes. Take it as you will, but for the fanatic diehards a live Stratovarius album was long overdue, with the one and only official on-stage showcase, Visions Live, having been released in 1997. Polaris Live is a surprisingly solid outing that doesn’t disappoint in spite of the fact original guitarist and visionary Timo Tolkki isn’t involved in any way.

“It’s been a while,” laughs frontman Timo Kotipelto. “As you know, though, this isn’t a ‘proper’ live album. We had to leave out a lot of songs, but this was always meant as something special for the fans rather than an official release. I think maybe in a few years we’ll do an actual proper live album.”

That said, the bonus album was never meant as a way to line the band’s pockets. Chance are good it’s drumming up some business after all…

“I think the label originally asked us if we wanted to record some live stuff for release, and when the tour was coming up we thought about recording a couple shows,’ says Kotipelto. “Then we decided to just bring the recording equipment with us to record the shows whenever we felt like it. At that point we promised the label we’d record some stuff and then mix it, and if it sounded good they could use it for a future release. It was also a good idea because there are a lot of fans that didn’t get the chance to come out and see Matias (Kupiainen) on guitar with us. This gives them the chance to hear how this band sounds with him in the line-up.” 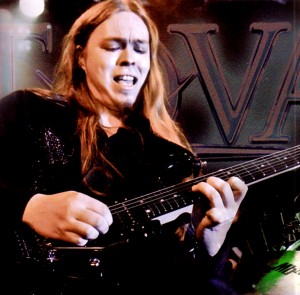 The focus of the Polaris tour wasn’t on the album but rather on Kupiainen, who ultimately enabled Stratovarius to make a comeback. Tolkki personified the Stratovarius brand, making him irreplaceable in the eyes of many fans, but Kotipelto says the band didn’t encounter the fallout they’d expected when they brought Kupiainen to the people.

“I was expecting there would be some fans making noise that they wanted Tolkki back, but there was none of that. It was the complete opposite. Okay, there were some people that spent the first few songs check Mathias out, but when they realized ‘Oh fuck, this man can play..’ they accepted him. It was in like that in some countries or cities, but everyone was very supportive in the end. They realized we’re having a lot more fun on stage now that we had with somebody else on guitar, and I think that makes a big difference. It was great. Of course you’re performing for the fans, but especially in my case, when I’ve got stress in my life and it feels like the band isn’t at 100% is affects my performance. It sounds stupid, but with Matias joining the band there was this new energy like you see and hear in a newcomer band.”

With Tolkki out of the picture for Polaris and all future activities, Kotipelto also found himself in the unusual position of being able to decide with his bandmates when, where and how Stratovarius would move forward. No longer driven by Tolkki’s vision, they are now a democracy.

“It was a totally different situation,” Kotipelto says of Tolkki’s absence. “Suddenly it wasn’t just one guy saying ‘Okay, these are the songs; you play, you sing, we’ll be going on the road in two months.’ It wasn’t exactly like that with Tolkki, but a lot of it was. He was the main guy – maybe not so much at the end – but suddenly we were five guys with our own motives. If we didn’t like a song, for example, we could say something about it and choose not to play it, so it was easier. I have to say, though, that Tolkki was a very good producer and he composed brilliant songs, so when we started working with Matias we didn’t have any real songs (laughs). The table was clean, we came up with what I think is a pretty good album with Polaris, and realized that yes, this is the way things should be. If someone in the band doesn’t like playing a certain song, he’s welcome to speak about it openly with the others and we’re able to make a band decision. It’s a lot different now.” 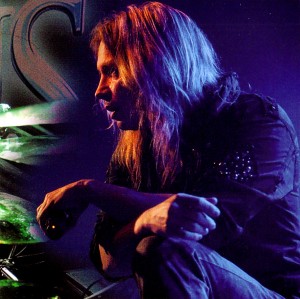 Asked for his feelings on Polaris now that he’s had the chance to live with it, Kotipelto sees room for improvement. It did a solid job, however, of obliterating band’s weak self-titled album from 2005 – touted as a comeback album following their initial Tolkki-instigated break-up – from memory.

“At the time I was very satisfied with the album because of where our starting point was, but now I think the next album will be better because Matias has been in the band for over a year now. It was a relief to be able to do Polaris without Tolkki, so that made it a good album, but the next one will be excellent (laughs). There were some ideas of trying hurry things up and try to release it by the end of 2010, but that might be too early. I think it’s better to concentrate on the album and work on the songs, maybe release it in February or March 2011. We’ll see.”

Kotipelto considers himself fortunate to be able to talk about Stratovarius’ future some 15 years since he joined the ranks. Especially given the break-up drama and mudslinging in the press that cast a shadow over 2003 / 2004.

“Well, I’ve been in and out of the band in that time, but mostly in (laughs). In a way I’m surprised I’m still here, but I get the feeling this is the way it was meant to be. The drama… it’s been too much if you ask me. I only ever wanted to concentrate on the songs and the music, but there were some people in the band who wanted to push things in a different way. That’s in the past now, though, so there won’t be any more of that crap.”

Wrapping things up, Kotipelto discusses the slim possibility of a new solo album at some point, making it clear that Stratovarius has always been and remains his first priority.

“When it comes to composing songs there might be only one song from me on the next Stratovarius album. Maybe there won’t be any. The other guys have been writing a lot and I haven’t been that active. If I happen to write something that doesn’t really fit the Stratovarius sound – power metal or whatever you want to call it – then I might put it on a solo album. The thing is, I don’t have a reason or a need to do another solo album. If it happens, it happens. There definitely won’t be a Kotipelto album this year or even next year, but you never know. If I suddenly come up with 12 good songs, why not?” 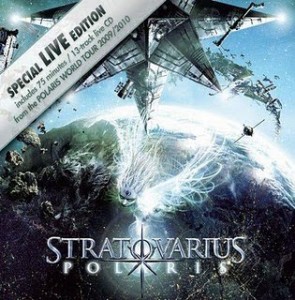 One thought on “STRATOVARIUS – Live And Wired”