Back in 2009, UK-based journalist / writer Neil Daniels picked my brain for his ongoing series of interviews with media folks in the metal business. That interview is included in his book All Pens Blazing – A Rock & Heavy Metal Writer’s Handbook, available now. It’s actually divided into two tomes, my bit of industry babble is featured in Volume I. Esteemed and bloody talented BW&BK colleague Martin Popoff wrote the foreword, and both he and BW&BK founder / editor-in-chief Tim Henderson are interviewed in the book as well. Fellow rivet-head Aaron Small gets page space in Volume II, and we’re effectively compiled alongside metal media royalty (yes, such a thing does exist :-)).

An excerpt from Daniels’ interview with Yers Trooly can be found below:

As a writer for BW&BK which artist(s) gave you the most interesting interview(s)?

“Tough question to answer. Interviewing Loudness at the Earthshaker Festival in Germany in 2005 was a personal highlight because I grew up on their music. Lightning Strikes (1986) was their first Loudness album I ever heard, and I was hooked immediately. Then I discovered their Disillusion record (1984) and that was it, fanboy forever. To meet up with the creators of two albums that were part of the soundtrack of my teenage years was surreal.

Michelle Meldrum from Phantom Blue/Meldrum. She was my very first interview (early 1994), for Phantom Blue’s Built To Perform album. I was nervous leading up to her phone call because I was afraid of sounding like a moron to someone used to dealing with “real” press people. That and I was socially inept when it came to women, so I had visions of tripping over my words the same way I did whenever I was put into social situations with good looking girls. But, in the space of about two minutes into the interview we were talking like we were old friends. She was very, very cool and a real sweetheart. A few years later we spoke again, and she blew me away by remembering who I was and that she had been “my first.” From that point on every time we spoke it was like two old friends shooting the shit. I was gutted when I heard she’d passed away. I still am.

Arch Enemy vocalist Angela Gossow. My interviews with her have always been great, but the first one we ever did was before Wages Of Sin – her debut with the band – was officially released outside of Japan. Supposedly it was the first interview with her by any North American metal publication, print or online. It was set-up thanks to bassist Sharlee D’Angelo and Angela’s mother. She was an absolute blast to talk to, very straight up and genuine, and I was pleased to discover that she’s still the same person to this day in spite of her meteoric rise to fame.

Stuck Mojo guitarist/vocalist Rich Ward. Easily one of the most talented and brilliant-to-genius musicians in the biz. Lots to say, but there’s a brain to back up his thoughts and opinions. Never a dull moment, and what I ended up with both times made for great stories.”

And the least interesting interview(s)?

“Least interesting, as in bored off my tits and working like a bastard to make it an actual interview? Michael Schenker takes the Number One spot, hands down, for being a miserable individual (at the time, anyway) who should have stayed in bed. One word answers, zero enthusiasm with regards to his own work, and that was two out of the three times I’ve interviewed him. I haven’t had too many bad experiences, which is surprising. I’ve been lucky.”

What do you think of (illegal) downloading?

“Folks can argue this up, down and sideways and find ways to justify illegal downloading, but I disagree with it completely. It’s just plain wrong in my eyes. That said, I can only put a small portion of the blame on the fans – particularly the younger fans – because if you have that kind of technology at your disposal it’s only natural to want to use it, especially if you have a limited budget for music. Older metal/music fans should know better, especially the ones that claim to love and support their favourite bands, but my big problem is with the assholes that put the music online in the first place because I don’t see how they benefit by doing so. Those people have screwed the music industry up for the artists, the labels, and the media alike.

It’s weird, because there’s this call to have illegal downloaders crucified, but I think people are missing the point. A much stronger message can be sent by nailing the people uploading the music illegally in the first place. Go after the cause of the disease, not the symptom. And you can’t tell me the technology doesn’t exist to track these people down. I know there have been half-hearted attempts to go this route, but the only reason it’s gotten as out of hand as it has is because the suits prefer to talk the matter to death rather than act. At some point you’ve got to leave the bloody conference room and get down to work.”

Do you prefer CD/LP?

“I learned to appreciate CDs because I had to, but I’m a vinyl freak. I have a huge LP collection back home in Toronto; every time I get back home I go through it and I’m amazed by some of the stuff I picked up over the years. Die-cut limited editions, embossed vinyl, 12” EPs with unreleased tracks, etc. Once I started getting in to metal I collected everything from my favourite bands that I could get my hands on. Funny thing is I recently got a hold of a combination turntable / CD player with a USB hook-up. There I was hitting the “record” and “stop” buttons, putting the songs from LPs I’ve picked up in Germany on my computer so I could make CD-Rs out of them. Very, very weird to be recording music like that again. Talk about nostalgia…”

Following is the official All Pens Blazing press release: 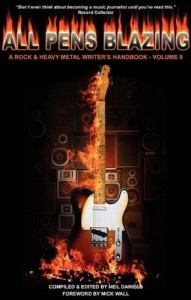 If you wanna learn about the history of metal magazines this is the place to learn. In total both volumes feature a staggering 134 interviews with rock and metal scribes from around the globe.

Ever wondered what it takes to be a rock journalist? In this extensive collection of books, Neil Daniels has interviewed a staggering 134 of the world’s most successful rock and metal scribes. The All Pens Blazing books are worthy historical documents for the serious enthusiast and can be used as handy reference tomes for the aspiring rock and metal writer. Volume I – which collected 65 interviews – was published in 2009 also by AuthorsOnline and has now been reprinted so both volumes make a matching pair. Both collections make essential reading for the rock and heavy metal fan.

Volume I (foreword by Martin Popoff) is 350 pages and features 65 interviews:

An overview of the books and purchase information can be found here and via www.authorsonline.co.uk.

Order the books via Amazon here:

All Pens Blazing – Volume I