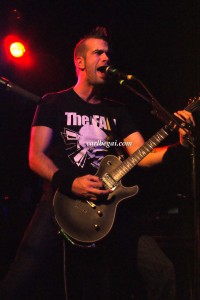 During Annihilator’s recent European tour in support of their new self-titled slab of thrash, I had the opportunity to speak with guitarist / vocalist / founder Jeff Waters and vocalist / guitarist Dave Padden for BW&BK (interview coming soon). Following is an excerpt from the chat with Padden discussing his involvement with Vancouver-based Terror Syndrome, launched by none other than Devin Townsend Project drummer Poederooyen and featuring Townsend cohorts Dave Young and Mike Young. With an independently released debut under their belts – recorded and released before Padden came on board in 2008 – Terror Syndrome is long overdue for a second round, but between Annihilator’s and Townsend’s busy schedules it seems as if the band has been cast into limbo.

“The thing is, Devin has been touring and his schedule almost totally coincides with ours,” says Padden, “so we’re out right now and Ryan’s out doing the American tour. Nothing conflicts at all, which is great. We did a couple shows with Terror Syndrome, but I wasn’t living in Vancouver at the time. I was in Nanaimo on the island so I’d have to take the ferry over, I got busy doing other things, so there wasn’t a lot of opportunity to push it. I’m back in Vancouver now, though, so we want to get going on a new Terror Syndrome album. Ryan’s been playing with Devin a lot, and after learning the whole Ziltoid album for the tour he’s like, ‘Man, I’ve learned some pretty awesome shit, let me tell you…’ and I believe it. I mean, having to learn all the Gene Hoglan stuff is madness, so he really had to step up his game. I’m curious to see what we come up with.”

Padden has become something of a sensation for Annihilator fans in that he sings as well as plays guitar on tour, standing toe-to-toe with Waters in both the rhythm and solo department. Most seasoned guitarists not talking through their asses will tell you this is no easy feat. With that in mind, it stands to reason Padden’s guitar skills will be a part of the next Terror Syndrome record.

“We’re throwing around the idea of me doing some guitar for the album, but there’s really only one guitarist in the band. I might pick one up from time to time when we play live but Terror Syndrome demands a lot of me vocally because I’m screaming my face off. I doing a lot more singing with Annihilator than screaming so I’m able to pull back a bit. It’s balls out all the time with Terror Syndrome, which requires a lot of energy, and I’m still not that good (laughs).”

Asked if Waters has influenced his playing since the duo began tapping into their on-stage shred chemistry, Padden gives credit where it’s due.

“Nobody influences Jeff; he’s invented everything on guitar already (laughs). For sure. Just learning Annihilator songs has forced me to work on every weak spot I have. I imagine some of that might come through with Terror Syndrome somewhere, but I listen to a lot of different stuff than Jeff does. Ryan and I are going for a less old school sound, but on a technical level Annihilator has had an affect on me. Absolutely.” 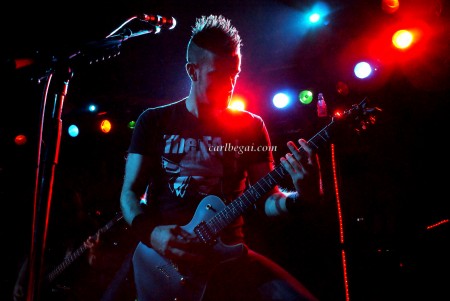 For information on Terror Syndrome click here. Go to this location for the latest noise on Annihilator.