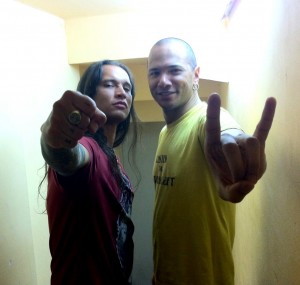 Over the last few years Hungarian bashers Ektomorf have gone from being regarded by the press as a poor man’s eastern European Sepultura to a brutally unique band with an identity of its own. Frontman Zoltan Farkas has been waving the flag since 1996 and Ektomorf’s ninth official album, Redemption, is the latest in his rather successful baby-steps conquest. During our interview (coming soon) discussing what has made the band something special in the eyes and ears of the fans that have locked into Ektomorf’s tribal groove sound, Farkas revealed how he managed to get Toronto rocker Danko Jones to sing on new song ‘The One’, a track unlike anything Jones has recorded to date in his own lengthy career….

“I met Danko in 2006 at Wacken,” says Farkas. “I fucking love his music; Sleep Is The Enemy is the best rock n’ roll album. He was coming off stage and I went to tell him it was a great show, and he recognized me as the frontman of Ektomorf. I was fucking surprised (laughs). We hung out backstage later that day, talked for a while, and we’ve been in touch ever since. When I was writing the songs for Redemption I wanted something different, and right away I thought of Danko. I sent him a mail asking him if he’d sing on the album and he wrote me back the same day saying that he’d do it if he could find the time.”

“I wrote the whole song, put down the drums, guitars, bass, wrote the lyrics and sent the song to him. The day before we played the Wacken Open Air this year he sent me his recordings. He did three takes of the song and all of them were fantastic. Danko told me later that he had to do the recording in the back seat of his car because his neighbours can’t take it when he’s singing and screaming (laughs). So, we took his recordings and put them into the real song, and when Danko heard it he was very happy about the fact it’s so heavy and brutal. He’s so down to earth and so cool. I mean, he was thanking me for the opportunity and it should have been the other way around (laughs).”

“We did a song with Lord Nelson from Stuck Mojo (‘Sick Of It All’ on the What Doesn’t Kill Me album from 2009) and that was great, but they’re a very heavy band as well. This was special because Danko Jones is fucking rock n’ roll. I knew it was going to be killer, but when he sent me his stuff I was laughing because I was so damn happy about it. I just hope it happens once in this life that we play the same festival somewhere so we can perform the song together on stage. That would be amazing.” 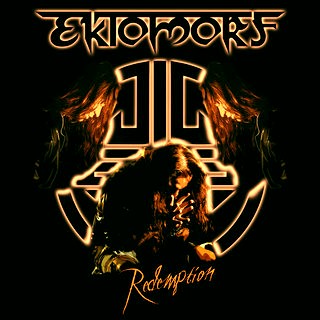 For information on Ektomorf go to this location. Danko Jones info can be found here.

… and since ‘The One’ has yet to be released, try these on for a taste of what the guys sound like on their own: