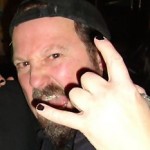 One of the things I enjoy most about being a part of the insane asylum known as the music industry are the people I meet / have met along the way. Not just the musicians, but the people behind and around the artists that make the machine work. Journalist / author / drummer Joel Gausten is one of these personalities, whom I initially got in touch with via MySpace when I asked him if he’d mind if I stole a piece of his writing for a BW&BK news piece. We’ve been in constant contact ever since, which resulted in me picking his brain on a variety of subjects (here and here). With the launch of his new radio show, Glory Is Noise, Joel invited me to be on the show for a round of shop-talk and brainstorming, the result of which can be found below.

Topics of discussion include my humble beginnings as a writer, record labels, the pros and cons of being an independent band, how not to frickin’ write a band biography, I share a couple war stories, we delve into the future of Heaven & Hell, decide on a new singer for Anthrax, and offer some healthy praise for Stryper’s new cover album, The Covering.

Every song on the playlist was selected by me for a specific reason, all of ’em personal… including my desire to educate my American peers about the awesomosity of the Headstones 🙂

So, for diehard metalheads that like it loud, and those that are curious about which Muppet I sound like most (it’s a toss-up between Gonzo, Fozzy Bear and the Swedish Chef), click here. Listen in stereo for maximum mayhem.

Go to this location to check out Joel’s catalogue work. If I ever grow up I want to be like him…