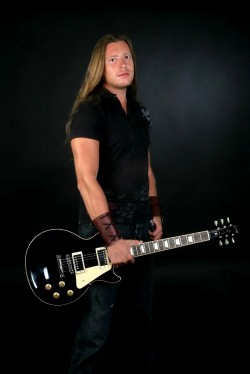 Since the disbanding of After Forever in February 2009, founding guitarist Sander Gommans has been far from idle. When he’s not giving guitar lessons and dealing with the everyday mortal grind, he’s immersed in music, showing up when his fanbase least expects it. His ultra-aggressive death metal-inspired HDK project knocked people for a loop – those that were fortunate to have been paying attention – followed by songwriting and two video appearances for the Kiske/Somerville project featuring ex-Helloween frontman Michael Kiske and Avantasia / HDK vocalist Amanda Somerville. One aborted project later – more on that in a moment – Gommans is working once again with Somerville, this time on her solo album. He also managed to find the time to give Primal Fear frontman Ralf Scheepers a skilled hand on a recently released solo album of his own, shoving the point home that “lazy” and “uninspired” aren’t terms that apply in Gommans’ universe.

“I played on five songs and wrote two of them,” he says of the Scheepers album, “which would be ‘Cyberfreak’ and ‘Back On The Track’. I actually wrote a third song but it was too late for the recording of the album, but then they asked me to play on those five tracks. I think ‘Cyberfreak’ has a little bit of my trademark sound, but it’s more back to the music I listened to 10 years ago. It was cool doing the album because I could write without any conditions. I was just writing heavy metal. Sometimes it can be over-the-top, but it doesn’t have to be extreme; the music just has to have that special ‘metal’ attitude.”

It’s safe to say this attitude made Gommans an appealing source of music to Scheepers’ co-conspirator and Primal Fear bandmate Mat Sinner, who was the creative force behind Kiske/Somerville.

“Yeah. I think Mat was already in the process of writing songs with Ralf for the Scheepers album, and I guess that because the Kiske / Somerville thing worked out well he thought, ‘Why not ask Sander to write something for the album, let’s see how that works out.’ Then they asked me to do the guitar parts, which was really cool because I felt respected not only as a songwriter, but also as a guitar player.”

Gommans admits he’s enjoying being a session player / writer rather being fully committed to After Forever. If anything, he’s at a creative peak with his sights set even higher for the near future.

“It definitely is cool, but I think I could do much more. I wanted to, but I made it a little bit hard for myself with all the guitar lessons. I’ve made a commitment to reducing the lessons a bit so I can devote more time to writing. I’m currently writing songs with Amanda for her next solo album, and I’d like to do another full metal album in the future. I’m kind of in a… I’m trying to figure out how to do that in a format that works. I did the HDK thing, which got some great reviews, but because we didn’t perform people forgot about it pretty quickly. There are so many albums being released that a project like HDK isn’t really going to satisfy any labels.”

“What I’m thinking about doing is what (Primal Fear guitarist) Magnus Karlsson is doing with Russell Allen (Symphony X) and Jorn Lande (Masterplan). If I could find a few talented artists I could write songs for them in a certain style to create a project, but I have to do it because I really like it and not just because things work out on a schedule. I always work with an idea in mind before I start writing. I’m going to write for myself, I’m going to write for this or that artist, whatever, and right now that idea isn’t clear. So, as I said, I’d like to do more but I’m stuck with the life aspect right now (laughs).” 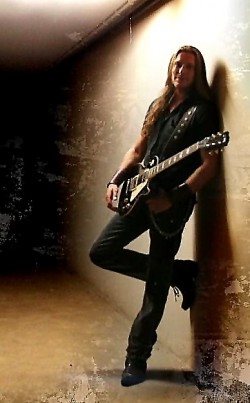 Fans of After Forever still following Gommans’ escapades were quite naturally disappointed to discover that he wouldn’t be working with former bandmate / Epica founder Mark Jansen as planned. The project, announced in 2009 as a collaboration between the two guitarists, evolved to become the recently launched Mayan, something Gommans prefers to be distanced from.

“I decided to quit because it became more and more obvious that they wanted to make Mayan a live band,” he says, “and it was going to take a lot more time than I initially expected because I saw it as a being a project when I started. Also, Mark wanted to work with Floor (Jansen / After Forever) and Simone (Simons / Epica), and I wanted to get out of that specific genre. I really thought we were going to create something new. I respect their opinion, but as an artist I decide to focus on other things.”

Mayan is perhaps best described as a more aggressive version of Epica – with HDK-like tendencies, oddly enough – making even the most devout fan question Mark Jansen’s choice of direction for the debut album, Quarterpast. It’s hard to understand why he wouldn’t simply use the material for the next Epica album which, in all honesty, is stronger than anything on the band’s last outing, Design Your Universe.

“I don’t understand it either,” says Gommans. “I think it’s going to be cool, but I think it’s too safe considering what they could be doing.”

With his focus currently set on Somerville’s next record, Gommans reveals her album will be anything but safe. Having worked together for years – dating back to 2004 and After Forever’s Invisible Circles record – the pair have always been about experimenting with their music. Something they took to an extreme with HDK if Somerville’s tales of working on the original demos are to be believed (which they should).

“When I write for Amanda I try to focus a lot on the vocals. She has to have the freedom to do whatever she likes with the music, and she’s a songwriter herself, so sometimes she comes up with an idea and I work it out into something a bit more metal. But, it could also be a song that I set up instrumentally that she adds to. The new material, think of it as being in line with the more aggressive song we did for the Kiske/Somerville album, ‘Set Afire’. It’s not going to be as extreme as HDK, but it’s not going to be as gothic as some of the female fronted bands out there now. Cool riffs, heavy stuff, but lots of room for vocals. It’s hard to describe it because when all the songs are ready, that’s when we’ll be able to work the album in a certain direction and style.”

Being as close to the music as Somerville the assumption is that Gommans will be on board to tour for the album if and when the opportunity presents itself. Turns out that isn’t the case, regardless of his involvement in the writing and recording.

“Amanda definitely will tour. I’m sure the songs will be the kind of songs that have to be played live, but it will still be Amanda’s album. She’ll perform it with a band, but I don’t think I will play a key role in that part of it because, in the end, that’s not my thing. It’ll all work out, I might make a guest appearance here and there. I’m still looking for something that’s going to give me a platform to write music that I can release as a project.”

Having made guest appearances over the last few months with Somerville and German metal queen Doro Pesch, the hope is that Gommans will at some point get his legs back.

“It’s hard to say,” he counters, “because when I did that guest spot with Doro, and when I played with Amanda in the States, those shows were really great to do because it was only a few songs. The thing is, when you do more shows, that’s when you know whether you like it or not. I don’t have a clue. I miss it sometimes, but a lot of the time I think ‘Thank God I don’t have to tour.’ It’s really weird, and I wish I could explain it to myself.”

“I do think that I’m missing some great opportunities, but you shouldn’t do something because you think you have to. You should do it because it’s fun, and that’s what I’m working up to. I’ll know when the time has come to play again. Over the last two years I’ve focused on so many things – teaching, guitar lessons, guest writing – I didn’t think about playing live. Now that I have more time I can think about the possibilities.” 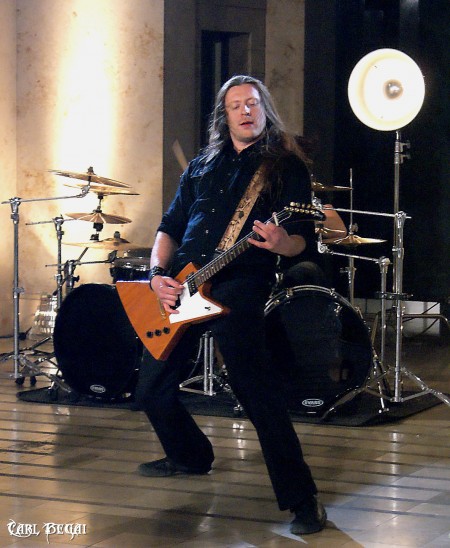 Check out the Scheepers track ‘Cyberfreak’ here. Watch Gommans being his metal self in the Kiske / Somerville video for ‘If I Had A Wish’ here, and feast on After Forever doing a bad-ass Iron Maiden cover at this location.

And for those that missed out on one mother of killer metal album, my favourite track from the HDK debut, entitled ‘Pedestal’.

2 thoughts on “SANDER GOMMANS – Master Of The Universe”