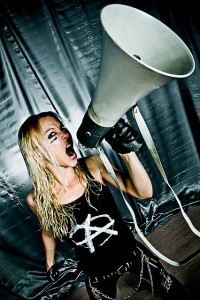 Arch Enemy vocalist Angela Gossow and guitarist Michael Amott recently fielded a host of questions from yours truly about their new album, Khaos Legions, with the result from said head-to-head-to-head landing on the BW&BK website (found here). Over the course of our discussion, Gossow tackled a number of subjects outside but related to the development of the new record, which is quickly coming to be recognized as one of the stronger albums of the band’s career.

Although Gossow isn’t the first woman to make her mark spewing death metal vocals, as Arch Enemy’s popularity has grown over the last decade she’s become widely regarded as the person who carved a carnage-strewn path for other ladies to do the same. She also has the distinction of being in a minority of extreme metal singers that doesn’t sound like a slobbering mess behind a microphone. Anyone with a mind to listen will realize there is reason and meaning behind the shred emanating from her throat.

“It’s a very conscious effort,” Gossow says of keeping things intelligible, “because if you want to do a death metal growl it’s very easy to have just one vowel that you use. That’s what happens because some death metal singers are just going for the sound. I want to have a lot of attack in the voice. I’m actually not thinking death metal when I sing; I think vocals, lyrics, thrash metal, rhythm, accentuating certain parts, the melody I’m following even though I’m screaming. Some of what I do is quite melodic, and I’ve been told by some producers that I actually change pitch when I’m doing my vocals. I’m song orientated. I’m not the death metal Chosen One that thinks I have to be as extreme as possible. I want to go with the song.”

“I think it’s because I love singers like Paul Baloff and Steven Souza from Exodus,” she continues. “I love the thrash metal like Testament, and Kreator also, even though there’s a heavy German accent in there (laughs). I’ve always liked the singers who are spitting out words I can understand, even Dave Vincent (Morbid Angel) and Jeff Walker (Carcass). When I hear the modern bands nowadays I have no idea what they’re singing about. They have a totally different approach to vocalizing.”

As suggested, the singers of these newer bands probably find a sound they like and stick with it…

“Yeah, but then you have to be like Obituary, where you actually don’t have lyrics (laughs).”

Khaos Legions was built using Arch Enemy’s tried and true formula of creating songs for the stage. Back in March, the band gave a couple songs from the new record an unexpected test drive at a youth centre near Gossow’s home town of Cologne, Germany. With a capacity of only 200, the AJZ Bahndamm in Wermelskirchen was ground zero for an in-your-face baptism of fire and an opportunity to play a venue much smaller than what they are used to. It was also a homecoming for Gossow in a musical sense, in that she frequented the centre years before Arch Enemy was a fact of life. 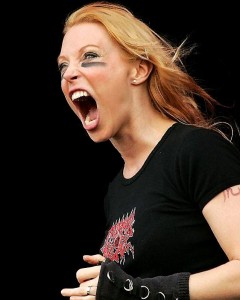 “It’s very close to Cologne, about 30 minutes on the tram, which I had to use to get there back in the day. I think I rehearsed there briefly as well. When you’re 16 and 17 years old you need those kinds of places where you can rehearse for free and play gigs. It was once scene back in the day and people would come in from the towns in the surrounding area, trading gigs and rehearsal rooms. Everybody ended up in every rehearsal room at some point (laughs).”

“The show was awesome, and we still have that occasionally,” she says of playing such an intimate show. “We play smaller clubs, and when you have a club with 800 people that’s packed you get the same feeling. People are jammed up to the front, the venue gets rid of the barriers so they can squeeze a couple more people in, and the audience gets very close to the band. After playing festivals in 2010 and doing some big shows in the UK – the Forum is way too big for us at 2,500 people – it was a nice change.”

It’s worth noting that Arch Enemy call their own shots these days as a self-managed band. They’ve dictated the pace at which the band moves forward since 2008, answering only to themselves when something goes wrong and able to pat themselves on the back for a job well done.

“That’s kind of the reason why we don’t want to get any bigger,” laughs Gossow. “The way we are right now is great because we can manage ourselves, but we’re pushing the limit of how much we can do on our own. But, it’s do-able. I think if we were to get one step bigger, like somewhere between Children Of Bodom and In Flames, that’s when we’d have to bring in production people. More people to help make decisions, basically, and that’s when you start losing control of things. I kind of like the idea of staying where we are.”

“Exactly. You can do whatever you want musically, you can shoot the videos for the songs that you want to release, you can tour when and where you want to tour. There’s no one saying ‘You have to do these festivals…’ no matter how shitty the fees are, all in the name of exposure. That’s not happening in our lives anymore. External management pushes for anything that gets offered because they want their 20%, which is why we ended up doing so many tours that left us very unhappy with a bad feeling in our gut. Things changed in 2008 and we’ve been holding on to that new freedom ever since.” 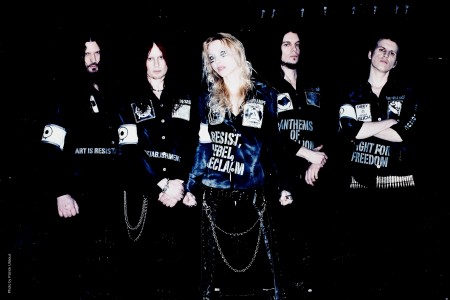 For information on Arch Enemy and Khaos Legions go to this location. Check out the video for the new song ‘Yesterday Is Dead And Gone’ here.