“I’m doing the new Testament album, and that should last about six weeks, so I’m looking at the end of August to start working on the next Accept record. I’ll pop over to Nashville and sit down with Wolf to go over ideas on that. The good thing about that and the Hell record, and the Testament record as well, is that I’m actually quite involved from the ground up. I’m not just coming in, pressing buttons and just recording the band; I’m actually a valued person to bounce ideas off. It’s almost like being an extra member of the band.”

Sneap reveals he had no designs on producing Accept when word came down they were going to try and make another go of it without Dirkschneider. Unimpressed with the Tornillo-fronted demos the band posted online as a tease, he took it upon himself to try and steer Hoffmann and Co. in the right direction.

“Working with Accept was a dream come true,” Sneap admits. “They were one of my all time favourite bands when I was growing up, and I heard they were doing a new album without Udo. They had Mark in the band and had posted some rough demos online – it was ‘Balls To The Wall’ and one other song – and everyone was saying ‘Oh, this is terrible.’ I got in touch with them, I introduced myself and told them what kind of work I’d done, let’s talk. Nobody else wanted to give them the time of day. I went over to Nashville on my own dollar, sat down with Wolf and Peter (Baltes / bass) at Wolf’s place, and listened to the ideas they had. Then I made them listen to the old Accept albums and said ‘Look, this is what the kids want. As a fan, I know they want the heavier stuff.’ It needed to be heavy, and when I heard Mark singing he really reminded me of David Wayne from Metal Church. I had this vision of Accept meets Metal Church during the The Dark era. I think we really pulled that off on Blood Of The Nations.” 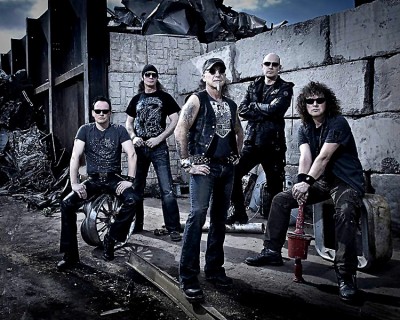 “We got the ball rolling, and we were two or three songs in when Wolf and Peter realized the direction they should be going. They saw that it shouldn’t go in the simplified AC/DC direction of some of their later albums, but rather in the direction of Breaker and Metal Heart. Once they saw that, things came together. It was great.”

Compliments to Sneap for retaining the classic Accept guitar tones and chugging locomotive groove, only he isn’t taking any credit for that…

“The funny thing that’s not the case. If you put Balls To The Wall on, and then put on Blood Of The Nations, they sound totally different. What you’re hearing is the style of playing, the space that’s in the music. I keep having this argument with people, where they’re saying that album production has become too clinical and blah blah blah; to me it’s not the sonics, it’s the style of playing. If you listen to what’s going on in metal now, it’s all based on chugging on the E-string, kick drums constantly and throughout. It’s too busy. The Accept thing, there’s a groove to it. Kick, snare, hi-hat, open riffs, lots of low end, and a good, crunchy solid guitar tone. It’s Wolf’s way of playing. You put Wolf through any rig, you can tell it’s him straight away; the same with classic players like Gary Holt (Exodus) and Eric Peterson (Testament). What you’re hearing is essentially what’s in their heads coming through their hands.

“When people say ‘You’ve captured that Accept sound…’ yeah, okay, I have it in my head how Accept should sound because I followed them religiously when I was younger. If you put Restless And Wild on, the guitars sound so thin, and if I gave them that sound now I’d be fired (laughs). I feel I’ve brought Accept up to date with the technology that’s out there. I haven’t over-complicated things, and when there are players that are the caliber of Wolf Hoffmann, I don’t go in and cut and paste and move things around. I make him play because that’s the fun of recording, and I’ve got the best seat in the house. Watching Wolf Hoffmann soloing in his basement? It doesn’t get any better than that (laughs).” 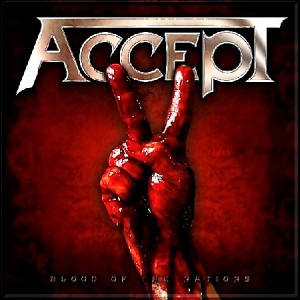 Check out a behind-the-scenes video report on the making of Blood Of The Nations here.