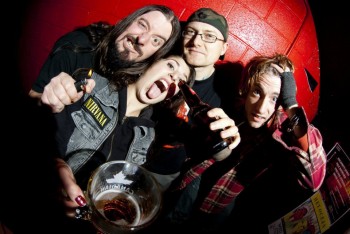 Christina: “We started recording this album over a year ago, in August 2010. We did the first album in two weeks, but for this one we really took our time. We went into the studio a few times a week and worked on songs here and there. We made them perfect; if there was something bugging us about one song we had the time to fix it. The three songs that we put out, we just wanted to get a buzz going and let people know that we were still around and working hard on a new album. I think some people were a bit surprised that we were working on new songs, so they were excited to hear it. We were playing a lot of new material at our live shows, too, so that’s helped get the buzz going as well.”

In spite of the arguable grunge tag, both Christina and guitarist/husband Pete Kasper agree there’s a punk attitude on the album. Turns out it wasn’t intentional…

Pete: “We didn’t do that on purpose. It just kind of manifested itself. We’ve always tried to kind of keep that grunge element in our music, but even last night at a show we did there was a guys that told us we’ve created a sort of modern grunge sound. I think that makes the most sense to us, because we didn’t want to copy the ‘90s sound even though we’ve always listened to that kind of stuff. We wanted to have those raw elements, but give it a 2011 sound. From what we’ve been hearing I think we did a pretty good job of that on the new album.”

Christina: “The first album has punk songs, metal songs, rock songs… this new one is a little more concise. It’s us saying ‘This is what we want to sound like.’” 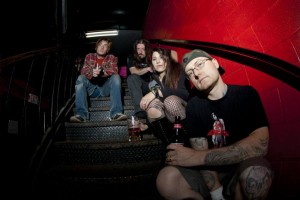 Doll quite naturally took their first album into account when writing for The Ragdoll Diaries, but Pete and Christina didn’t draw up a laundry list of do’s and don’ts based on Inside The Dollhouse’s strengths and weaknesses.

Pete: “Every time you do an album you want to better the previous one. There was definitely that goal in mind, but I guess one of the things that we did reference from the first album was the fact it was so jumpy with all the various styles. On this one we consciously focused on what the Doll sound should be. We asked ourselves what it was that we were trying to portray with our music. We picked a specific path with the idea of ‘Let’s see where it takes us.’”

Christina: “We do like the sound on the first album, but this time we really wanted to have that studio band sound. I think you can tell that we spent a lot more time and effort on the new album. A lot of the songs are catchier than the ones on Inside The Dollhouse… we’re better songwriters. At least I like to think so (laughs).”

They were equally as laid back when it came to choosing the first single from the album; a little punk love song called ‘FMO’.

Christina: “It’s funny, because we had already released three songs, and our drummer Nick ‘Chopz’ Richer wanted to do the video editing for the songs we decided to use as the first single. We had ideas for pretty much every song when it came to doing a video, but it just fell on ‘FMO’ as the single. It was just a random choice, not a deliberate thing. We knew it wasn’t going to get radio play (laughs).”

Pete: “When we play ‘FMO’ live we get a huge reaction because it’s easy to sing along with, so it’s almost like a Doll anthem at this point. And the video, even though it was very low budget because we did it ourselves, it was actually nominated at the Ottawa International Film Festival in the music video category. It was incredible being a part of that, with all these other bands that have released these amazingly huge production videos, and us with our $10.00 budget clip (laughs). We were actually in the Top 6 and being reviewed by industry people and MuchMusic. It was awesome. It just proves that it’s all about the music. If you’ve got a good song it doesn’t matter how graphically awesome it looks.”

It’s worth noting that The Ragdoll Diaries features the return of Sally, an integral part of the band’s songwriting at this point. 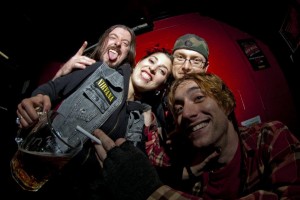 Christina: “Definitely. We have some songs on The Ragdoll Diaries that are about Sally, and it’s the same concept as on the first album, the same mind frame. We use her to talk about female experiences at a young age, stuff like that, so it’s a part of Doll that we definitely want to keep.”

The band will also be keeping their independent artist status for the time being, although they did seek out a label deal prior to releasing The Ragdoll Diaries.

Christina: “We did send a few things around, but we just knew that with the musical climate we have now it wasn’t going to happen. We have friends here in Ottawa that are in very mainstream bands that labels and radio would kill for, but labels can’t sign them because they don’t have the money. The industry is in shambles right now, so why wait for that opportunity when you can do it yourself, put it out the way you want it, and on your timeline? If a label is interested in us, cool. If not, we’re going to do it on our own.”

In closing, Christina and Pete address their relationship. One would think the old adage about familiarity breeding contempt would be even more applicable as a couple daring to work together in a band, but in this case it’s way off the mark.

Pete: “It actually works out pretty good. We’re in the same house, so if one of us is working on a riff we can just get together and jam on it any time, 24 hours a day (laughs). For the creative process, it’s awesome. And for touring and playing shows, we share in that success. When we’re playing with a bigger band like Spinnerette or Die Mannequin, it’s not one of watching the other thinking ‘Wow, that’s cool, I wish I was on stage…’ We get to share that high together, which is really cool. I think we got lucky.”

Christina: “It’s funny, because we never sit down and say ‘Okay honey, let’s sit down and write a song.’ It’s more like Pete will be working on a riff downstairs and I’ll hear it, and come up with some ideas for putting my guitar over what he’s doing. And boom, we’ve got a song (laughs). The good thing is that we’re not too sensitive. If something doesn’t work we don’t get all pissed off with each other, we just work on something else.”

Pete: “We’ve spoken to other bands, and they’re like ‘You two are married?! I don’t know how you do it…’ (laughs). They act like it’s the worst move in the world, but so far it’s worked for us.” 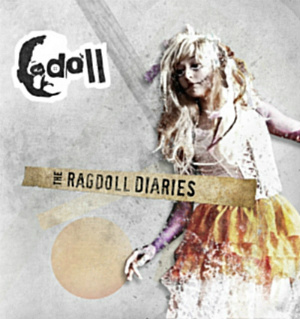 All photos by Jon Davies