“We had a long discussion before anything got off the ground,” Dolan admits. “Every time we’ve tried to get back together it’s been because we wanted to, and every time we stopped it was because of some other fucker, never because of us. The Mantas thing for example; we did the album (Zero Tolerance), we shot a video, we did the Earthshaker Festival in Germany, but when we got back it became apparent to me rather quickly that the record company (Demolition Records) might not be spending the money promoting the album they way they should have been. I told them that if they didn’t invest in it, thing were going to go the same way they always have. We had a big discussion with management and the record company, and I wouldn’t let it go. I kept bringing it up and they got so pissed off at me in the end, thinking that I’d become a bit of a problem saying they should do this and that. The label eventually told Jeff that he either dropped me or they were going to drop the band.”

“I told Jeff that he’d made a good album and I wanted the label to see the potential in it, and if that meant I had to walk away so they didn’t kill it, so be it. The album was bigger than me, so I walked away. They carried on, did another video, went to Japan, and in the meantime Jeff got a German manager. She was great, and she went straight to Demolition and told them everything that I’d told them. The next day Jeff got a letter saying ‘Right, we’re not gonna keep you anymore.’ The label dropped him right there. Fuck me, you know? I might as well have stayed.” 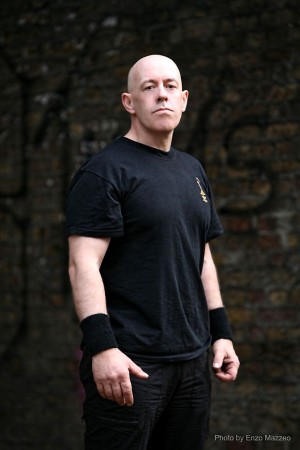 Following the Mantas fiasco Dolan dabbled in a number of projects, including an Atomkraft anthology released through Neat Records in 2005, and an Atomkraft EP issued in 2011 featuring a cover of the Thin Lizzy classic ‘Cold Sweat’ as its centerpiece. And somewhere in between – 2010 to be exact – the Venom-bled wheels began to turn once again, putting Dolan on a much needed collision course with Dunn.

“Jeff was doing his own project, Dryll, and when Antton came in they started thinking about giving me a shout. Jeff deliberated for ages and he finally called me; we just chatted the way you and I are doing right now, and then he started telling me about what he was doing with Dryll, about working with Antton again and having guest vocalists but needing a permanent vocalist and a bassist. It took me several minutes before the penny dropped and I realized he was talking about me (laughs).”

“There were things that I’d wanted to do before Mpire Of Evil, but I didn’t have the time and I suppose I didn’t have the focus,” Dolan adds. “I was also thinking that everybody in the business is up to something because I had some bad experiences with the Venom thing, Atomkraft and Neat Records. I was wondering if it was worth the displeasure. I had to think about it very seriously. The three of us worked well together, so it was tempting. And when they told me there were no record labels involved at that point, nobody telling them what to do, that sold me on it.”

“We had fun doing it, and that’s what has always drawn me and Jeff to play together,” Dolan says of getting back to business. “Our styles bounce off each other quite quickly; Jeff quite technical and he likes really tight tempos and tight changes. Venom was like throwing an egg at a wall musically, which was great, but Jeff has progressed as a musician and his style has opened up completely since the Venom days. He’s all about keeping things clean, and I love that. The tight twists and turns, the play on the dynamics, I love it, and that’s what I’ve always loved about metal. I mean, listen to the opening of Exodus’ Bonded By Blood; the slow build, then snap and bang, you’re into the first track. My fucking heart jumps every time I hear that (laughs).”

Mpire Of Evil’s debut album, Hell To The Holy, shines due to the fact that Dolan and Dunn weren’t trying to recapture or outdo their Venom past. It’s a different beast, rooted in traditional metal with thrash-like tendencies rather than trying to cash in on the classic Venom’s satanic Motörhead vibe.

“We were interested in seeing how people responded,” says Dolan. “Because it’s the three of us, we knew everyone was thinking it’s going to be another Venom record. In some corners people were screaming for that. We had some great album reviews at the very start, which was wonderful, but I remember reading a review from one black metal journalist that just ripped the shit out of it. He said the album was a piece of shit, it sucked, it was fucking pedestrian, it’s boring, and I came away from it saying ‘Thank fuck for that.’ Yes, we’re not black metal, and if we or the record company had tried to put us in that box we would have been sunk. This is more traditional metal, yes, but we just took a different approach to it.” 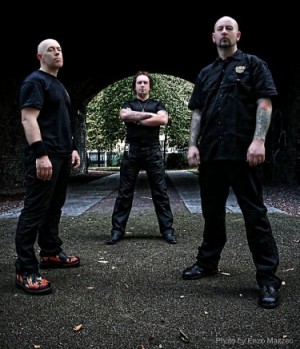 With over 30 years in the trenches, Dolan has paid his dues and is well aware of how quickly and completely the music industry can rip artists to shreds depending on the cards being played. He freely admits to being apprehensive about getting back in the game yet again, but when asked if Mpire Of Evil has fulfilled his expectations, he can only laugh.

“Funnily enough, yes. I’m really loving this more than I thought I would. When I was younger and doing this, Atomkraft had limited success. We had shit distribution, so if people can’t hear you they don’t know you’re around, and when you turn up in town opening for a band everyone knows they want you to get it over with really quick. That causes a problem, but Atomkraft enjoyed that aspect of it because we had to turn it over every single time. It was never easy for us, we always had to work really hard and we never took it lightly. The thing is, when that’s all going on you don’t realize how much fun you’re having, so when you look back there’ll be holes in it. You think ‘Fuck, why didn’t I take my time?’ It’s like eating the best steak you’ve ever had at a restaurant and just wolfing it down. It’s just a memory after that, and you always want to go back there to have another one and eat it really slowly. When you do get back it’s different; they put the steak in front of you and it’s just not the same. I’ve found the restaurant and it’s going to be the same steak, only this time the chef’s a little bit better than he was (laughs). This steak’s going to be so much juicier and I’m going to eat it really, really slow (laughs).”

At press time, Mpire Of Evil had just wrapped up a North American tour supporting UK countrymen Onslaught. A small scale tour, yes, but a big deal in that it was booked well in advance of Hell To The Holy’s release. The fans were treated to a set consisting of new material and classic Venom tracks, which went over a storm. For Dolan, it was his first real tour since 1988; far too long to be off the road as far as he’s concerned. He offers a look back at Mpire Of Evil’s first official step into the ring…

“Antton’s band Def-Con-One played a London festival show and our label was coming over to see us. We’d been recording but we hadn’t rehearsed, and Antton suggested that we jump on stage at the end of their set to a couple song. We decided to do ‘Hell To The Holy’ and ‘Black Metal’, but we didn’t get together and rehearse for it. We each learned our own versions of the songs, and when we went up at the end of the show we didn’t watch each other or anything like that. We played as if we’d been doing the songs together all our lives. It was great.”

“However, when we walked off stage me and Jeff were bent over gasping for breath, and I remember saying, ‘Fuck me… that was only two songs?’ (laughs).” 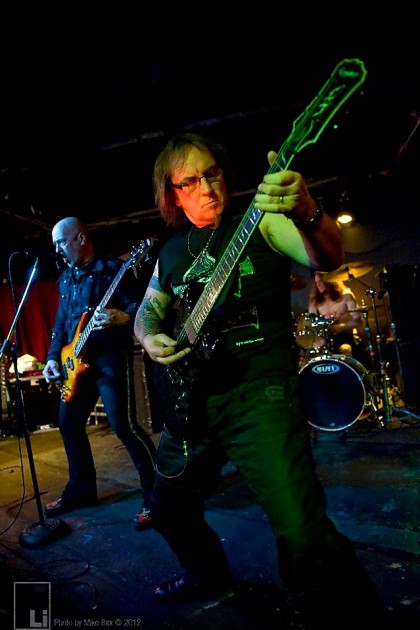 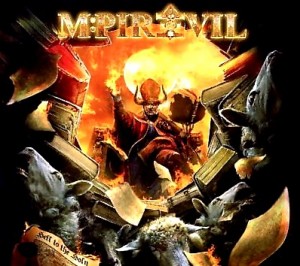 For news and and information on Mpire Of Evil go to this location.