“It’s coming up on ten years now, and that blows me away because it doesn’t feel that long ago. It was about a year after they got back together to do some reunion shows here at home. Brighton Rock’s second album, Take A Deep Breath, is still one of my favourite albums. Every single moment on that album means the world to me, because it brings me back to great memories of my childhood. I originally wanted to be a drummer, so I’d set up a makeshift kit and try to do Mark Cavarzan’s moves (laughs). It was Mark’s playing, Bobby Blotzer from Ratt and Joey Kramer from Aerosmith, those were the guys I tried to emulate up to the point where I got a guitar. The Fraze Gang thing came about because I stayed in touch with Mark, Greg, and Stevie. We’d talk on the phone and I went out to a few Fraze Gang shows, and they eventually asked me to get involved with the band. Originally I was just their live guitarist, and we’d get together to rehearse and jam on the songs.”

McGowan is on board as a full time Gang member, appearing on the new album as a key player rather than an “additional guitars” credit.

“It’s awesome because I’m the principal guitarist in my other band and in Fraze Gang I get to be a rhythm guitarist 75% of the time. It was and is cool to back up Greg, because I’ve always loved different styles of music. It was an honour just to be with them as a live session player, and I guess they liked having me hanging around… except for me saying ‘How did you play this on that song, Greg?’ all the time (laughs). When it came time for them to start working on the album, I was invited to play on the tracks. It was amazing to be allowed to be creative on songs that Greg wrote. That was incredible for me.”

Despite any hero worship on McGowan’s part, intimidation never really crept into the creative process.

“It was more intimidating when I had to fill in for Greg in Brighton Rock because I wanted to to make everyone happy,” McGowan admits. “I wanted to do the songs justice. I was 23 at the time, and I wish I could go back now because I’m older and wiser and my playing had improved. I’m a fan of Greg’s work, but I’m not an identical player to Greg. Once the relationship started with Fraze Gang, it just felt very natural. Playing with Greg in the studio, it’s like I’m getting a free guitar lessons (laughs). Being there to see how he put the songs together, how he puts the harmonies together, it’s humbling but it’s a lot of fun.” 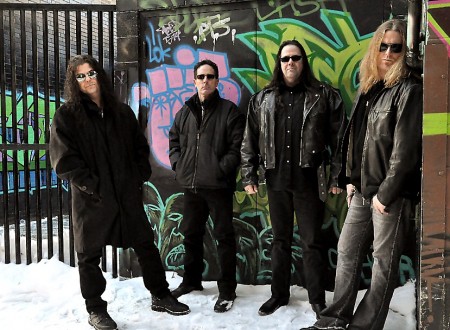 In a separate interview (found here) Fraser chalks up the band’s heavier direction to having brought in McGowan to fatten up the sound. Unlike the Fraze Gang debut, the new album has the warmth and attitude of a live recording without the benefit of a stage, which is more likely to garner attention from traditional rock fans. Part of this is McGowan’s influence even if he wasn’t involved in the actual songwriting.

“The new album is heavier and more aggressive than the first record,” McGowan agrees, “but it’s still very melodic. ‘Saint Or Sinner’, for example, is a great tune, and I’ll never forget going over to Greg’s place to work on some riffs one night during the summer. He showed me that one riff, which he wanted on the album, and it evolved to become the song it is now. They’re very much Greg’s songs, though. I didn’t write any of the new material. Greg would teach me the riffs and I’d learn the concept of the song, but I was able to be creative doing the solos, the little fills I put in here and there. It was cool that he gave me the freedom to do my own thing, but I still wanted Greg’s opinion at the end of the day on what I came up with.”

Even so, given McGowan’s history and high regard for Brighton Rock, there must have been moments while recording the new album where his natural tendency was to push things in a similar direction…

“I see what you’re saying, but I respect the Fraze Gang material and the direction they want to take it. Greg has given me the ability to play how I play, but I play to the song rather than turning in a wankfest. I definitely get to play my style and if I hear an idea in my head I can throw it in there. There’s definitely room for me to be creative in certain parts. But, if I try to push the material in another way, or even towards Brighton Rock, the reality is that Gerry (McGhee/vocals) has such a high range and a distinctive voice and that’s what people identify Brighton Rock with. If you look at the music Greg was the chief writer of the Brighton Rock material – of course he did co-write with Johnny (Rogers / keyboards) and Stevie – so if Gerry were to guest spot on a Fraze Gang song you’d hear a connection between the two bands. We did work on some riffs together but as much as I’m a fan of all styles of rock and music in general, I’d never walk in and say ‘I have this riff, it’s kind of like Pantera’ (laughs).”

He saves those particular brainstorms for his other band, Dead Celebrity, quite happy to hold back on any down-tuned riff madness while working in the Fraze Gang camp.

“I’ve been playing with Dead Celebrity for about five years now. It’s heavier than Fraze Gang; the riffing is similar to bands like Atreyu and Killswitch Engage. I jumped at the chance to play in Fraze Gang, though, because it was such an honour to even be asked. It’s an experience that improves my playing, I learn new material, and hell, I get to work with some of my heroes (laughs).”

To check out Fraze Gang 2 audio samples and to purchase the album go to this location. For information on Derek McGowan and his work click here.