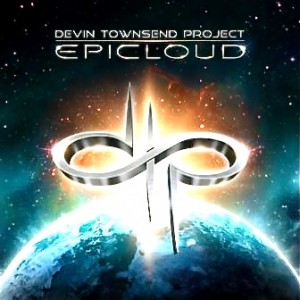 Anneke van Giersbergen makes a grand return as Townsend’s female counterpart, dishing out lead vocals and trading backing harmonies as required, up front no less than 50% of the time. Even half way through the album it’s hard to imagine what Epicloud would sound like without her. It certainly wouldn’t be as in-your-face as it is, and that’s without taking anything away from Townsend’s vocal performance, his band (Waddell / Van Poederooyen / Young) or wall of sound production values. Hard to pick where she shines brightest, though I was partial at press time to her performances on ‘True North’, the pop-ish ‘80s feelgood groove of ‘Save Our Now’ (reminiscent of her latest solo album Everything Is Changing), and the crushing metal assault of ‘More!’ in particular.

As for the man behind the madness… damn. If the Ki / Addicted / Deconstruction / Ghost tetralogy seemed to stretch Townsend’s songwriting skills a bit thin at times, Epicloud goes in the opposite direction as being bloody majestic in its execution. Whether he and his troops are bringing the prog metal hammer down with ‘True North’, strutting the heavy metal jazz hands on ‘Lucky Animals’, or taking a Kinks-happy road trip with ‘Liberation’, it’s impossible not to be yanked into the flow (assuming you’re not still pining for a Strapping Young Lad resurrection). In fact, the quality of the songs is such that even the chain-chewingest rivet-spittingest metallers can admit to liking the ballads ‘Hold On’ and ‘Divine’ without hanging their heads in shame. I initially questioned the presence of ‘Kingdom’ – originally recorded for the Physicist album in 2000 – on Epicloud, but the reboot is superior to the original (just as the Ziltoid record’s ‘Hyperdrive’ was on Addicted) and it works extremely well beside the new material.

In the end it’s the heavy side of things featuring Dev and Anneke exchanging vocal leads that get my synapses synapping – ‘True North’, ‘Liberation’ and ‘More!’ – making the thundering ‘Grace’ Epicloud’s crowning glory in this here brain. Heavy, epic, tender, loud, band on 11, gospel choir on 12, the team of Townsend and Van Giersbergen putting in a performance for the books… words don’t do it justice. Suffice to say I bet you never thought melody could be this brutal.

No, Epicloud will not appeal to all of Townsend’s fans, citing a lack of sonic violence and aural moshpits. But the ones that do get it will keep the record at the top of their HevyDevy go-to playlists from the moment it finishes playing through for the first time.

Check out Townsend’s track-by-track overview of the album here featuring audio samples of all the tracks.

An interview with Anneke about her Epicloud experience is available here. Devin’s take on the album back in 2011 can be found here.