So, about a year-and-a-half ago I started using whatever downtime I had to write a story. It’s a work of fiction, and it’s not about the music biz even though the industry does turn up along the way. Some of you who visit this site regularly may have noticed the small “grim” link at the top of the page, but I’ve now decided to let folks know about it officially… beyond the few souls that were silly enough to subject themselves to my creative streak a while back. 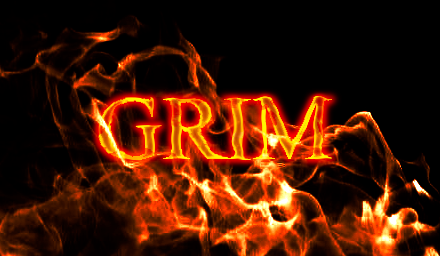 A link to the prologue of the book is below, available for your amusement. With luck, a great deal of perseverance, and saved-up funds I hope to release it independently early next year. Sure, an agent and roads leading to a publisher would make my life so much easier – and the search is indeed on – but I have no intention of waiting for the right combination of timing, business people and luck to get the go-ahead to publish if I have the resources to do things the hard(er) way.

Some of you may be amused by what you read, others may be offended (which means you really don’t want to read the whole book), and some of you may decide I should stick to writing formula rock star showcases because GRIM is a pile of crap. Fair enough, so long as it makes you smile in spite of yourself.

And for the record, the graphic isn’t the final cover. Just something I threw together so the words you’re reading look more attractive.

Check out the prologue for GRIM here.

– flames courtesy of shaedsofgrey at DeviantArt.com. Touch-ups and pimping to suit his purposes by Carl Begai.