“Below The Belt did really well for us on radio in Canada, the States and Europe, so I’m glad it had the legs; definitely more than Never Too Loud did. In hindsight Never Too Loud was a bit of a misstep for us, but I wouldn’t really take it back now that we’ve done Below The Belt and Rock And Roll Is Black And Blue because I like bands that have hills and valley to their discography. Living through Never Too Loud for those one-and-a-half years wasn’t torturous, but the outcome of the session was kind of annoying. I’d rather put Never Too Loud out again, but only as the demos. When we had those demos we were going into a world class studio with a world class producer (Nick Rasculinecz / Rush, Death Angel) thinking that was the album, but it didn’t turn out that way. I resisted saying anything when we were doing press because I couldn’t understand what people were hearing that I wasn’t. When we were finishing Rock And Roll Is Black And Blue I went back and listened to Never Too Loud, which was critically the worst received album we’ve done, and I wanted to make sure we weren’t at that level. I didn’t realize how sonically poor Never Too Loud was compared to the more recent two albums.”

Releasing ‘Take Me Home’ as the second single probably didn’t help given the commercial feel of the track. In fact, it’s very reminiscent of the BARENAKED LADIES hit ‘The Old Apartment’; very unlike Danko Jones’ signature street grit approach to songwriting.

“The demo for ‘Take Me Home’ has a stripped down White Stripes garage feel,” Danko reveals. “It’s hard for anyone to hear that after hearing the finished product, but it was originally just a basic kick-drum-snare-stomp and really raw. When our producer Nick heard that song he heard all these other voices in it to soup it up. That was the whole point of being in a huge studio in L.A. with a big name producer… why would I fight him on that? I didn’t travel all that way to work with him just to fight with him, and I was guessing he knew something I didn’t, but it didn’t turn out that way. If people could hear the Never Too Loud we imagined they’d say ‘Oh, this is the sequel to Sleep Is The Enemy.’”

“With Below The Belt we really had something to prove,” he adds. “If we didn’t put something out that wasn’t a fist to the face people were really going to question where we were coming from and we would have lost ground. We were angry and ready to prove ourselves, so we made sure that every song hit hard.”

Danko has never been shy about paying tribute to his influences, and the tradition continues on Rock And Roll Is Black And Blue. Mid-album track ‘Always Away’ is blatant AC/DC worship, and ‘Legs’ could easily be KISS song hammered out by Gene Simmons. One of several KISS-isms in the band’s history.

“I guess ‘Legs’ is the closest thing to a Gene song,” Danko agrees. “I’ve always said I’d love to write for KISS, but that’s a song I’d submit for the Gene album (laughs). On the last album, ‘Active Volcanos’ was a full-on tip of the hat to KISS. I made no qualms about that and I really wanted to see if we could do it because we’d never really had a song like that before. KISS influences us as more of an overall thing that a direct thing.” 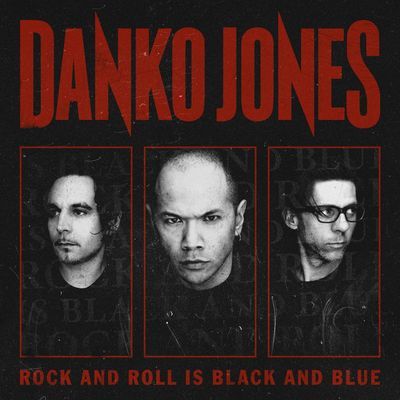 Go to the official Danko Jones website here for information on the band and tour dates (because they do a lot of touring).

Check out Part 2 of the interview here.