Ever since Guns N’ Roses and Tesla made it cool for hard rockers and metalheads to mess around with acoustic guitars – with G’N’R Lies and Five Man Acoustical Jam respectively some 20+ years ago – it seems every band has flirted with the unplugged concept. Hell, at press time Mpire Of Evil had kicked off their first ever Japan tour with an in-store featuring a set of acoustic Venom classics (!). So, when word got out a few years ago that Stratovarius frontman Timo Kotipelto and ex-Sonata Arctica guitarist Jani Liimatainen had teamed up for a dynamic duo acoustic tour through their native Finland it wasn’t an earthshattering surprise. Their respective fanbases went suitably mad searching for footage on YouTube, of course, and the resulting requests, demands and yammering over the years for an album’s worth of acoustic material from the pair have finally been answered. Working under the Kotipelto & Liimatainen moniker, they’ve put together a collection of bare bones covers on Blackoustic, an album made for the fans rather than trying to cash in on a still-popular musical format.

“I’ve been doing these acoustic gigs with Jani for about two-and-a-half years now, and it did start like that,” says Kotipelto. “We basically got fed up with people complaining and decided to go to the studio and do it (laughs). We were laughing about it at first because nobody puts out acoustic albums like this, and as a duo it really doesn’t make any sense especially since we do mostly cover songs at the gigs. Why would we do it, really? And the problem is that when we do the live gigs, a third of the songs are ballads and the rest are rock songs. We did an acoustic version of ‘Speed Of Light’ (Stratovarius), for example, and we could play it at the proper tempo but that wouldn’t make any sense. We actually had to consider what was important in the song, try to find that red line, and make a good arrangement of it. The album is a little different from what we play live because there’s more energy at the live show because of the audience.”

The Blackoustic set-up is as stripped down as you can get, featuring just one guitar and two vocals. That said, to have a shredder like ‘Speed Of Light’ – one of the fastest songs in the Stratovarius catalogue – turned into a ballad is considered blasphemy by some fans. Strangely enough, the acoustic remake actually works… provided you’re not expecting something as bombastic as the original.

“I don’t know about you but I actually like this version of it. It’s very different from the original, and it’s interesting to see the people in the audience when we play it. I tell them before we start that some people might know it, and it usually takes until the actual chorus for them to figure out what song it is. But that’s the way we wanted it to be from the beginning.”

“We’ve been playing close to 30 songs for our acoustic sets, so there was a bit of a dilemma trying to decide what to record,” he continues, “but some of the songs just don’t sound good as a recorded studio version compared to the live version. Quite often we play a cover of ‘The Trooper’ (Iron Maiden) but if we try to record it, it sounds like shit. Live it’s much different because the people are there. That’s why there are so many ballad-type arrangements on the album; we can make them sound more reasonable that way.” 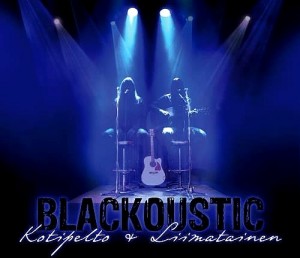 Check out Kotipelto & Liimatainen’s cover of the Gary Moore classic ‘Out In The Fields’ here.