Still, weeding through the archives, the temptation to go back into the studio and tweak the recordings with up-to-date performances…

“Of course. A good example of that would be going into the older albums, the one we did with Brian (Soulard/vocals). If we were going to do that… talk about opening a can of worms (laughs). We’d probably end up re-doing half of each of those albums. It’s best to leave them alone, but the last three in my opinion – and I think most people share it – they were the pinnacle of what we were trying to do. I’m very happy with them, but we knew we could go in and get things situated the way we want without actually interfering with the performances. We’re not going to be replacing vocals or guitars or anything like that. If anything I might be adding a guitar here and there with the rhythms, which we’ve been experimenting with. They’re going to be the ultimate versions of those albums, definitely.”

Funny how, after everything Drover has done in his post-Eidolon career – King Diamond, Megadeth, touring with Hail! and Testament, recording with Saga’s Michael Sadler – people are still interested in the band and want to know when a new Eidolon album is going to surface. 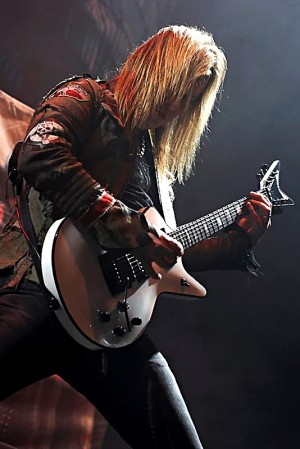 “I’ve had that question asked more times than you can count (laughs). That’s another reason we thought this would be a cool time to do this.”

Since the April 2012 announcement of a new solo album in the works Drover has revealed that it won’t be issued through Magna Carta, the prog label responsible for getting his debut Metalusion out to the masses. He clarifies his reasons for the change:

“Unfortunately, there was a little bit of a falling out there. I was really pleased with the way they handled the Metalusion album, from the artwork to the promotion. It was all great, but a couple things happened when we did the Metalworks DVD shoot (in September 2011) that I wasn’t really keen on. It wasn’t the way I like to work, so I opted to get out and not do the next album with them.”

As for the status of the DVD, which was originally a podcast seen worldwide by an estimated 25,000 people in 64 countries, it should be out this year. “Should” being the operative word.

“It’s been delayed for a while. It should have been out a long time ago. Christ, we recorded it in 2011. The last I heard from one of the guys at Magna Carta that it’s supposed to come out this year. I’ve already seen the cover, I know things are moving forward, so it’ll hopefully be out in spring/summer 2013. I did the mixing and mastering for the audio on the DVD, and I did a second version which was more for audio play rather than video.”

Wrapping things up, Drover offers up s few details of the forthcoming album, which he hopes to have finished by the summer.

“There aren’t going to be as many covers as there were on Metalusion, although we really did make those covers our own, anyway. We released the Saga cover of ‘Careful Where You Step’ with Mike Sadler singing, which came out great. That’ll definitely be on the album. There’s also going to be another song that was a piece of music that was played by the Ozzy Osbourne band when Randy Rhoads was still alive, during his last tour. They did this thing – really a classically influenced kind of instrumental piece – that they would play before the drum solo, and after the drum solo they’d go back into it and end it. I always loved it but I had no idea what it was or where it came from. I ended up asking Rudy Sarzo (bass) about it when I was looking into the Queensrÿche thing, and he told me it was just something Randy came up with and built it around the drum solo section of the show. I decided to take it and add a solo section in the middle, and just constructed it into a regular length track. That was one of first tracks recorded for the new album.”

“There’s also a possibility of us doing an old Eidolon song called ‘Seven Spirits’, the title track from an album we did a long time ago (1997). I’ve always liked the song but there are a few things about the recorded version that I don’t like. We’re toying with the idea of putting a version on the album with Henning Basse (Sons Of Seasons, ex-Metalium) singing it. That’s probably going to happen. Three or four songs will probably have vocals and the rest will be instrumental, but that’s not 100% confirmed yet.”

“We’re taking the same kind of approach that we had for the last album; do one or two songs, concentrate on those and get them finished, then move on. All of that is being done in between everything else that I’m doing. We’re going to try and get the album done for the summer. As a matter of fact I’m finishing one track up right now.” 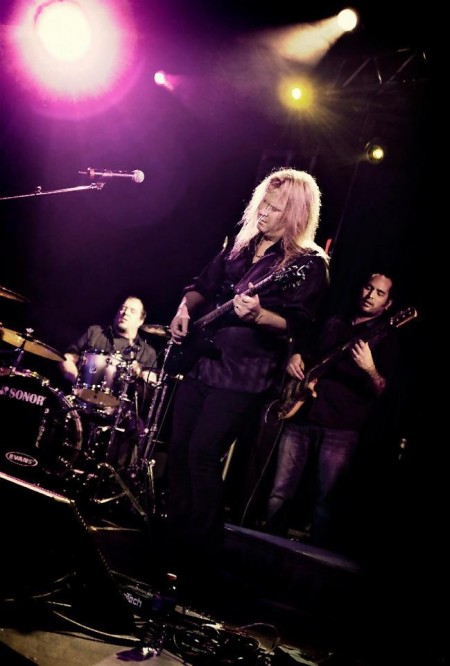 Check out Drover’s comments on his Queensrÿche experiences here.

A prime example of Eidolon at their best with ‘Beyond The Gates’ from Coma Nation can be heard here. Metalusion can be found at this location.

All photos taken from the Glen Drover Band’s official Facebook page here. If you happen to be the photographer, let me know and I’ll make sure your credited / linked as required.