“It’s a dream come true, absolutely. It really is, and it’s been an honour and a privilege to be involved in it.”

Adopting the Black Star Riders moniker rather than continuing to hit the bricks as Thin Lizzy is a ballsy move. Sure, it’s a massive sign of respect to Mr. Lynott’s legacy by choosing not to cash in on the Thin Lizzy name, but Warwick & Co. are also toying with career suicide by, in essence, pushing themselves as a brand new band on a largely spoiled and jaded music scene.

“It was really one of those things that… we started writing the songs, there’s so much going through everybody’s mind because it’s such a huge thing because it would have been the first Thin Lizzy album in 30 years. I think our respective guts were saying to us ‘It’s going to be great…’ one day and ‘Maybe this is a step too far, using the Thin Lizzy moniker…’ the next. Certainly for me, I was really wrestling with my conscience on this because I’m a huge fan. We all had a discussion and we all kind of blurted out that they were feeling the same way. That started the ball rolling, where we agreed that the new songs were great but we should put them out under a different name.”

The band hasn’t looked back since, and there are no regrets.

“I think doing things the other way would have been far more detrimental,” says Warwick. “A lot of people just wouldn’t have accepted it if we put the album out as Thin Lizzy, and I think this way it’s almost like a new beginning. It’s created something… if you told me at this time last year that we’d be having this conversation I’d be wondering ‘How did that happen?’ but in four short months Black Star Riders is everywhere. It’s phenomenal, and it was the correct decision. It’s certainly a weight off my mind and I can actually get back to being me a bit more.”

For all its Lizzy-isms, so-called newbies Warwick and guitarist Damon Johnson did the bulk of the writing on All Hell Breaks Loose and managed to turn out a record pretty damn faithful to the back catalogue they’ve been serving up on stage for the last few years.

“Scott came in with two or three of those killer Gorham guitar riffs,” Warwick laughs, “so between the three of us we covered it all. It’s such a unique situation. I’ve been living and breathing Thin Lizzy my whole life, and in the last three years it’s consumed my whole life. And I’m such a fan of Phil’s style of writing that it’s just part of who I am now. It’s ingrained in me and I can’t deny it. I’ve never learned so much from a dead guy in my life (laughs). It’s absolutely nuts. It’s like Phil is there teaching me along the way. I’ve learned more in the last three years than I’ve learned in the last 25 years in the industry just from absorbing Phil’s style of writing. Of course it’s rubbed off on me, and it’s something I don’t want to lose. I want to retain that as we move forward.” 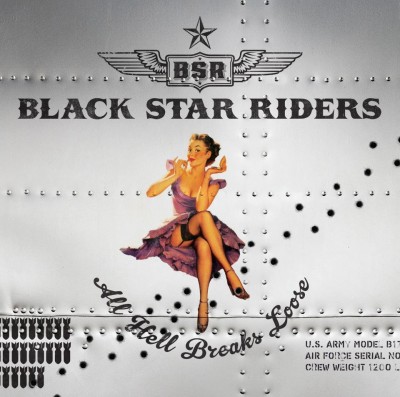